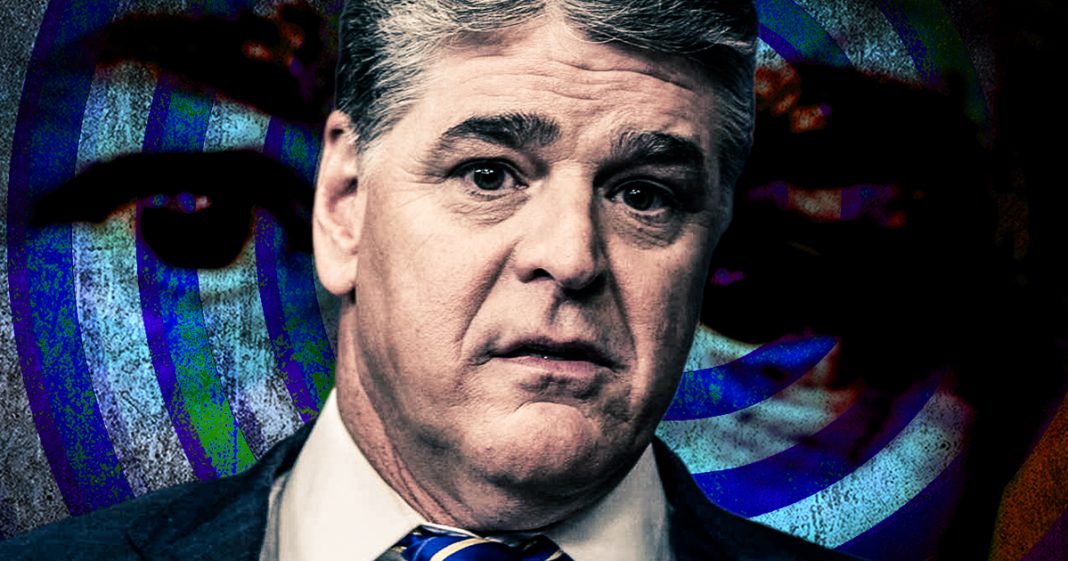 During a court appearance on Monday, Trump lawyer Michael Cohen revealed that his mystery third client was Sean Hannity. Hannity quickly denied that he ever hired Cohen, saying only that he might have gotten his advice on some real estate deals. One of these men is lying, and whoever it is just damaged their career forever, as Ring of Fire’s Farron Cousins explains.

On Monday afternoon, it was revealed in court that Sean Hannity was the mystery third client of Michael Cohen, who is obviously Donald Trump’s attorney. He’s the guy who arranged the payment to Stormy Daniels. He also represents a guy named Elliott Broidy, who up until recently was a member of the RNC finance team. Cohen arranged for hush money payment to a woman that Broidy had an affair with, just like he did with Donald Trump. Also worth noting that back in 2009, Broidy, who again, just resigned from the RNC finance team, pleaded guilty to a felony count of bribery. The charge was later reduced to a misdemeanor because he cooperated. Either way, the guy obviously a criminal by his own admission, so those were the two.

See, right now the two stories aren’t exactly adding up, and there’s no evidence that Sean Hannity hired Michael Cohen to be a fixer for him, to take care of any problems. He may have just been a regular client with a regular lawyer, but here’s where the discrepancies show up. Sean Hannity said on Monday on Twitter, and then again on his TV show, that he was never a client of Michael Cohen’s. He had just casually as a friend sought his advice on a real estate deal, so if that is true, if Hannity is telling the truth, something the guy doesn’t even know how to do, then he would not be covered under attorney/client privilege. If you never paid the guy, if you were never officially his client, you are not protected. Therefore, the court releasing your name isn’t a big deal at all.

Now Cohen’s lawyers, however, argued that Hannity was the client and he made sure to tell them to not release his name, that he had paid Cohen, that he had sought legal advice from him in the capacity as a client and lawyer. The two stories do not jive together, and here’s what that means. One of these groups is obviously lying. Their stories are contradictory. If Cohen and his team are lying, that would be lying under oath. They’re in court, so they’d find themselves in very serious legal problems, and Michael Cohen’s credibility, whatever credibility he may have had left, is completely out the window. That’s going to hurt Donald Trump. It’s going to hurt any defense that Donald Trump comes up with in the many investigations going after him right now, and Cohen could find himself in jail, at least for a short amount of time, possibly disbarred for lying under oath.

If Hannity is the one who is lying, and everything that Cohen and his lawyers have said in court is true, then Hannity takes yet another shot to his credibility and Fox News suddenly finds themselves with a very real problem. You see, Sean Hannity, for about the last week or so, and even more times before that, has spent his days on his show non-stop talking about the raid of Cohen’s office, and how horrible it is, and how that’s an affront to justice, and how it should be used to fire Rod Rosenstein. He’s been defending Cohen left and right. He’s even had Cohen on his show and not once did he mention that he was a client of Cohen’s. You kind of have to disclose things like that if you want to have any credibility in the media.

So Fox News finds themselves in a very unadmirable position where they’re going to have to be dealing with a host who may have lied about his connections to Cohen, and they’re going to have to do something about that. This story is going to end very badly for one of these two groups, and actually, if it turns out that Sean Hannity is the one lying, it’s going to end badly for him, and by all accounts so far, this court case is going to end badly for Michael Cohen. Everybody who’s been associated with Donald Trump in one way or another kind of finds their career in ruins at this point. It’s only fitting that Sean Hannity would be the last domino to fall before Trump himself falls with him.