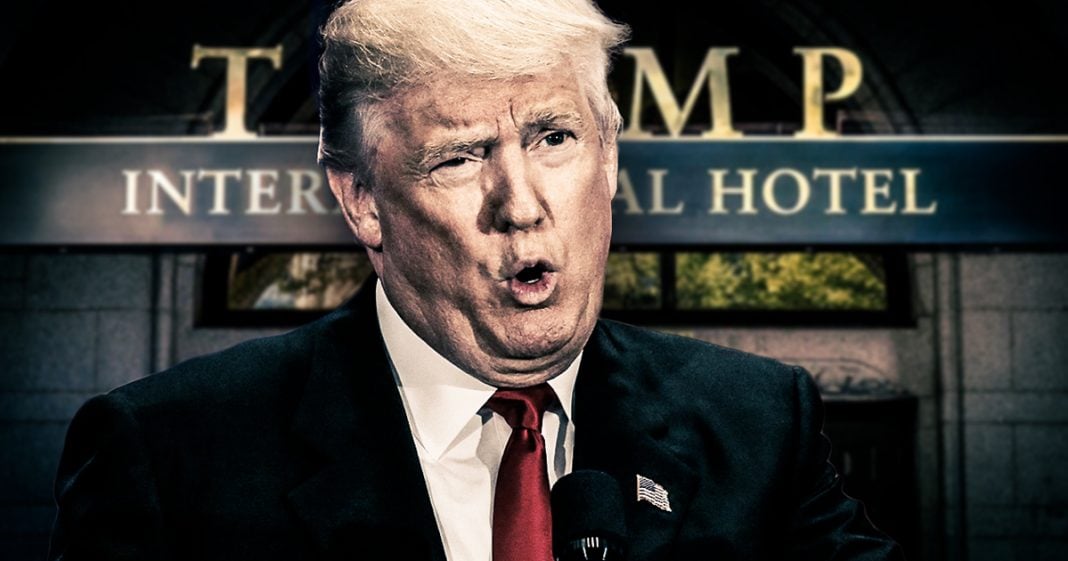 Adding to Donald Trump’s legal problems, a judge in Maryland this week ruled that an Emoluments Clause lawsuit against the President can indeed move forward. Trump is currently being sued for allegedly violating the Emoluments Clause with his hotel properties, and though the results of this case wouldn’t be as damning as the Mueller investigation, it could force the President to completely divest from all of his properties and stop profiting off of his office. Ring of Fire’s Farron Cousins explains.

On Wednesday of this week, a judge in Maryland ruled that an Emoluments Clause violation lawsuit against Donald Trump can, in fact, move forward. The lawsuit was brought by the group Citizens for Responsibility and Ethics in Washington, accusing the president of violating the Constitution by accepting emoluments from his hotels in the DC area.

Here’s the heart of the issue: Donald Trump, as we all know, owns a hotel in Washington DC. Foreign dignitaries come in and they stay there. They pay the money to stay at the hotel. That money then goes back to Donald Trump because he owns the hotel. Well, he’s also the President of the United States, and accepting any kind of emolument, be it cash a gift or any title of nobility, is illegal. It’s a violation of the Emoluments Clause of the United States Constitution. Therefore, CREW is arguing that these dignitaries or foreign leaders staying in Trump’s hotel and paying their nightly fees are indirectly giving Donald Trump an emolument, which would violate the Constitution.

The judge agreed enough with that point to allow this lawsuit to move forward. Here’s what he said in the ruling here. He said the defendants … or excuse me, the plaintiffs have presented enough evidence to show that there there enough of a connection between the Trump Hotel and the dignitaries and leaders staying and Donald Trump himself to allow for evidence to be brought forward, to hear this case in front of a jury.

Now, before anybody gets excited, here’s what’s gonna happen here. Even if this lawsuit finds that, yes, Donald Trump has violated the Emoluments Clause of the United States Constitution, this could technically … obviously, anything could … be an impeachable offense. He’s not gonna get impeached for this. I think that is way, way, way out of the realm of possibility at this point. But what this lawsuit could do is force the president, legally force him, under penalty of impeachment, to give up all of his interests in all of his properties, making Donald Trump no longer able to profit off the office of the presidency. So all of those little golf trips he takes, and he goes to his own golf courses, and the Secret Service pays tens of thousands of dollars for golf carts, he doesn’t get that money anymore. He wouldn’t be entitled to it, ever. And that’s the best-case-scenario outcome for this lawsuit.

Obviously, it’s gonna be very tough for them to prove that this in fact an emolument, because one of the hearts of the issue here is: What entitles an emolument? So they’re gonna have to make that argument. It’s a big case, it’s an important case. But it’s not gonna lead to Donald Trump being removed from office. But, if he starts to see that he’s losing a hell of a lot of money as a result of this lawsuit, if it is successful, and he’s no longer making a profit off the office of the presidency, the odds of him wanting to stay in that job drop significantly. And that could lead to him either choosing to not go another four years, or deciding to call it quits a little early, before his four-year term is over.