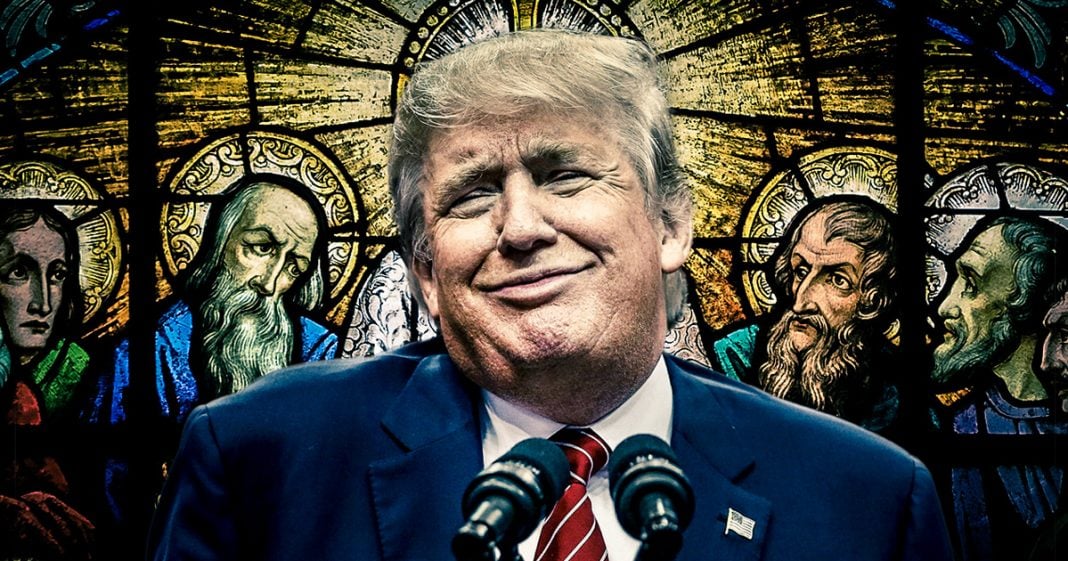 Evangelicals in the United States have decided that having an affair with an adult film star is not only excusable, but it is downright acceptable when it comes to Donald Trump’s behavior. These phony Christians are destroying religion in the US with their hypocrisy and love of money and power, and their support for Trump could very well spell the end for the Religious Right. Ring of Fire’s Farron Cousins discusses this.

Well, the only thing we can think of is the Stormy Daniel’s scandal, and in fact, a lot of evangelicals say that, yeah, that made them support the president even more. Donald Trump had an affair with an adult film star, an industry that evangelicals claim is absolutely evil and demeaning. Had an affair with this woman four months after his wife, his third wife, gave birth to their son, and evangelicals are looking at that right now and saying, “That’s the kind of guy I like. That falls in line with whatever values I claim to have.”

If nothing else from the Trump administration has been positive we can at least count on the fact that he has completely exposed every single member of the evangelical community, of the religious right, as complete and total frauds, because that’s what these people are.

There is nothing, anything that this man has done as president that falls in line with Christianity. I don’t care if you believe in god or you don’t, or you’re a Christian or a Muslim or whatever, nothing that Trump has done falls in line with anything the Bible says that we should be living our lives by. These people that claim to be living their lives by that book are still supporting him anyway.

They want those tax breaks. Every leader. Every leader that I can think of the religious right, of the evangelical movement here in the United States is an absolute fraud. They worship power and money. They do not worship god. They do not worship any gods other than the god of money and the god of power, and that’s what these people are all about.

Unfortunate they still have too much power in the United States today. They have convinced their followers, these people who think that they’re following the Bible and living a good Christian life, they have convinced them that we should look at a guy like Donald Trump and think that he is the second coming of Jesus Christ. That he is somehow holier than the rest of us, even though he has lived his entire life as a conman, a fraud, and basically to put it in its simplest terms, a complete and total piece of shit.