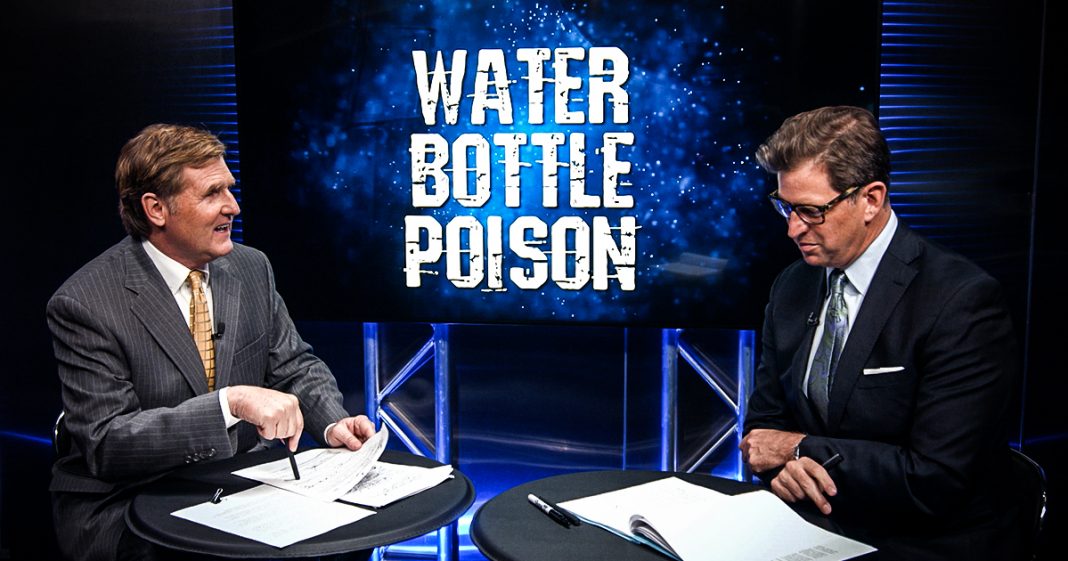 A new study led by a nonprofit journalism group found that more than 90 percent of several top brands of bottled water were contaminated with tiny pieces of plastic – particles that can create lingering health problems for people. Ring of Fire’s Mike Papantonio and Peter Mougey discuss this.

Mike Papantonio: A new study led by a nonprofit journalism group found that more than 90% of several top brands of bottled water were hugely contaminated with these tiny pieces of plastic particles that can create lingering health problems for people. So, no surprises, I looked at this story, I said, without even reading I said, “Let me guess, Nestle is involved.” Yeah, well here’s the point, what it is is little strips of plastic that you can’t even see. They do these tests with the process of a dye, and when you use the dye, you put it under a special light, all of a sudden you do a count-

Mike Papantonio: You do a particle count and the entire bottle is filled with these little pieces of plastic that move through your system, and biologically it becomes part of your system, and some people are able to deal with that, then others aren’t. You have people with Crohn’s disease, you have people with irritable bowel syndrome and they have all types of gastrointestinal problems, they can’t deal with this quite as well. So, here’s what I found incredible, Nestle, when the tested Nestle’s Pure Life, they did the test-

Peter Mougey: The name kind of jumps out at you, Pure Life, thank you Nestle.

Peter Mougey: To put that in perspective, San Pelegrino was in the opposite end of the spectrum.

Mike Papantonio: Who was it?

Mike Papantonio: Okay, so you need to know this. You need know Nestle Pure Life, if you want a lot of plastic in your system, and if your system will handle it. The problem is if you have GI tract problems, this really isn’t a good thing.

Peter Mougey: You could drink the water out of the tap.

Peter Mougey: So, you could drink the water out of the tap and you think, “You know what? I’m going to take care of my family. I’m going to drink more pure water, I’m going to get something that’s nice and clean. There’s going to be no contaminants in it.” And here you are feeding your kids or your loved ones, you’re feeding them a bottle of water, Pure Life, with 10,000 different particulates in it.

Peter Mougey: The name Pure Life, and you’ve spent money on it when you could’ve gotten it for free.

Mike Papantonio: You want it because it’s going to be better for you, right?

Peter Mougey: That’s infuriating to me.

Mike Papantonio: Okay, here’s the real stinger here. Okay, so Nestle finds out that the independent testing took place and that they found 10,390 shreds, or little particles of plastic in this drinking water called Nestle Pure Life. Now, Nestle says, “Okay, we’re going to do our own study.” I can’t make it up. What does Nestle say?

Peter Mougey: That they had no problems, it was biological pieces.

Mike Papantonio: It was zero. It was zero, they said, “We have zero.” In other words it was 10,000 versus zero. We see this all the time practicing law, because right now I’m handling the Montsano RoundUp case and there’s cases of cancer all over the world. I mean the cases of cancer, leukemia, blood cancers of all kinds, neurological issues, birth defects.

Peter Mougey: You’ve got a name for the people that get hired by the industry.

Mike Papantonio: Biostitutes, yeah. They go out and hire biostitutes, and the biostitute is somebody you can hire at a university-

Peter Mougey: And they’ll say anything for you.

Mike Papantonio: Yeah, you pay them enough money, “Oh no-”

Mike Papantonio: Yeah, “RoundUp doesn’t cause cancer.” Or, “No, we looked at this and there are zero particulates, Nestle is a clean company.”

Peter Mougey: After the scientists that had zero interest in the outcome says there’s 10,000.

Mike Papantonio: Listen to this, Nestle has 10,390 plastic particles in their drinking water, per liter. Now, the average per liter is, take a guess, right at 300. If you take all of them, and as you point out, Pelegrino was 74.

Peter Mougey: 74. And we did a story a while ago that Nestle was the one that was stealing the water out of the California-

Peter Mougey: So they’re getting the water for free and they can’t even make sure it’s clean.

Peter Mougey: That was the water, they had some lease that they were extracting water out of one of the national fjords.

Peter Mougey: And they had, I forget what the exact, but they had the ability per the lease to extract a certain amount of gallons.

Peter Mougey: And it was this big.

Mike Papantonio: But the lease was 50-

Peter Mougey: After 50 years of that it would’ve been expired and they’d been taking out water, they would take out 7000% more-

Peter Mougey: Pay nothing, and it had no lease and anything else, and then come to find out that they can’t even make sure the water’s clean.

Mike Papantonio: So, while California is burning to the ground because they’re having problems-

Mike Papantonio: Yeah, huge drought issues, you’ve got the company Nestle pumping water out of the aquifer for free in the millions and millions of gallons, then they take that water and they put it in a bottle. Now, when they put it in the bottle it was 10,390 pieces of plastic in it.

Peter Mougey: And they ship it up to Michigan and sell it to them at an exorbitant rate because they can’t drink out of the taps.