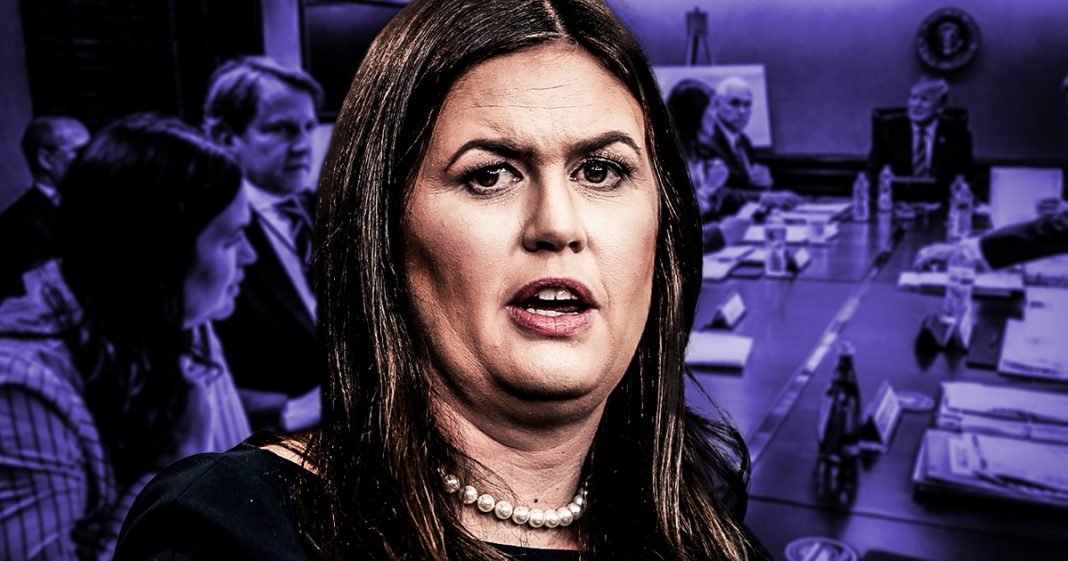 White House Press Secretary Sarah Huckabee Sanders tweeted out a photo this past weekend of members of the Trump administration in the Situation Room during the Syrian missile strike. But Twitter users were quick to point out that the missile strike happened when Mike Pence was in Peru, yet he is clearly seen standing near the President in the photo. Huckabee Sanders was busted again, but this likely won’t be the last time, as Ring of Fire’s Farron Cousins explains.

This past weekend, White House Press Secretary Sarah Huckabee Sanders tweeted out a photo that, according to her tweet, happened during the Syrian missile strikes that Donald Trump launched Friday evening. Now, she didn’t specifically say that the photo was taken during that time, but she referenced the missile strikes on Friday evening and she said, “Here’s a photo.” Well, people on Twitter were very quick to point out the fact that Mike Pence was in that photo very near Donald Trump, and yet when the missile strikes actually happened, Mike Pence, vice president, was actually in Peru, so there was no way that that photo could have been taken during the missile strike as Huckabee Sanders implied with her tweet.

Here’s what happened. Sarah Huckabee Sanders was looking for a win. She wanted this administration to be known for something great, so what she tried to do with this tweet was recreate the photo of Obama, and Biden, and Hillary Clinton, and everybody else sitting in the Situation Room during the bin Laden raid. That photo really kind of captured the mood at the time. It was widely shared. Everybody recognizes that photo, so Huckabee Sanders thought it would be a good idea to tweet out this photo and maybe have their own bin Laden moment possibly to make up for Donald Trump’s previous mission accomplished moment, but it backfired spectacularly. Why? Because this woman is incapable of telling the truth. She is incapable of just being straightforward and honest with the American public. She has a very real problem. I firmly believe that there is something wrong with her, with the fact that she is incapable of telling the truth to anyone at any given time for any given reason.

There was no reason to even put that picture out there. She did this to herself, because she wanted her administration to look serious, look like we were actually working. Everybody’s sitting around and all it did was one, people called her out for the lie, because they knew Pence wasn’t supposed to be there because he was in Peru, and two, it made people wonder why in the hell the press secretary was even there to begin with. She’s not involved in policy. She has nothing to do with military strategy, so why was she even in the room when that photo was taken when they were allegedly discussing what to do with Syria. The picture was apparently taken on Thursday evening.

What are we left with, right? I mean, that’s the big question now. Is this photo actually of the administration talking about Syria missile strikes for the next day? If so, why is Sarah Huckabee Sanders there? Is she more than just the press secretary in this administration? Is she helping to call the shots? If this was a discussion about the Syrian situation and whether or not we’re going to send millions of dollars in missiles to bomb empty buildings and kill children, why weren’t there more people in that room? Why were there only just a few? Nothing about what Sarah Huckabee Sanders has described about this photo makes any sense, nor does it hold up to any kind of scrutiny.

If this was the honest discussion that they had the day before to discuss what to do, I would hope to God that they had more intelligent people that could have been in that room, but instead you got Huckabee Sanders, you got Mike Pence, you got Trump, and you got a handful of other people, certainly not the brains that you would want discussing military strategy when it comes to life or death for people in a country that’s been plagued by civil war for a decade now. I don’t think anybody wants Sarah Huckabee Sanders crafting military policy for us. In fact, I don’t think anybody in this country even wants Sarah Huckabee Sanders tweeting us pictures of this administration, but she wanted them to look good. She wanted everybody to look like they were working, and she really needed a win for this administration, but as is always the case, she tweeted a picture out and made things so much worse for herself and for her boss.