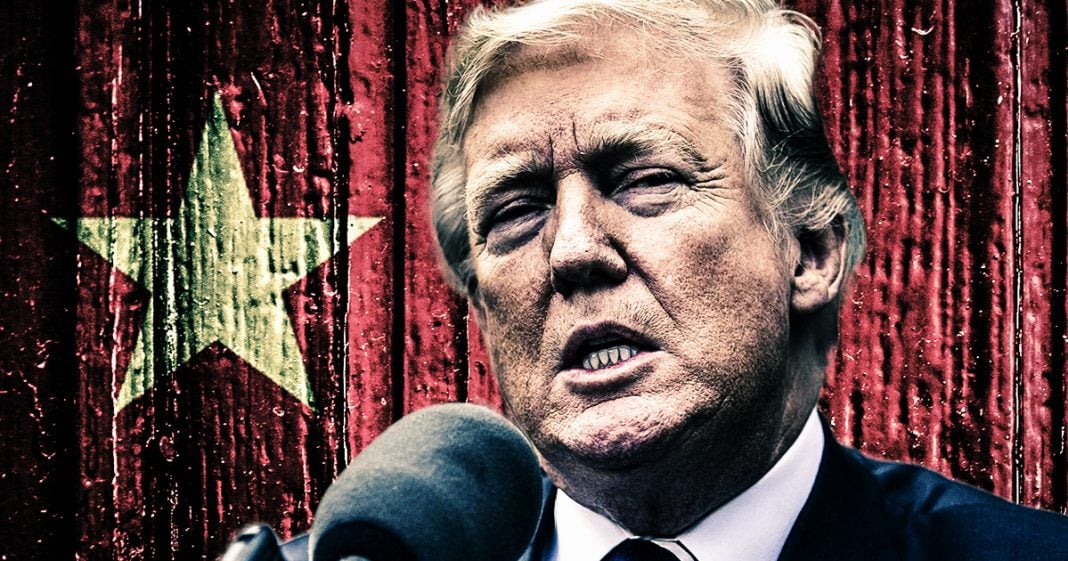 According to the chief economic analyst at Moody’s, Donald Trump’s trade war with China will cost the United States roughly 190,000 jobs, mostly in the agricultural sector. This is due to the fact that tariffs on produce leaving the US will cause the multi-billion dollar industry to take a massive financial hit, leading to ripples of layoffs throughout the country. Ring of Fire’s Farron Cousins explains.

According to the chief economist, chief economist analyst at Moody’s, Donald Trump’s trade war that he has now started with China is going to cost the United States 190,000 jobs. Most of those are going to be in the agricultural sector of the American workforce and here’s why. China recently announced that they were going to increase the tariffs on US produce coming into their country. China is a big importer of US produce. That happens to be a $14 billion a year industry for Middle America, the area where all those farms are. Now, if they’re goods are going to be basically priced out of the market over in China because of Donald Trump’s trade wars, they’re gong to lose billion upon billions of dollars.

Then what happens? The companies lose the money. They an no longer afford as many employees, so those employees get fired, get laid off. Then, the businesses that depend on those employees who are now laid off going and spending money at them, they lose money. They lay off workers and so on and so forth as these ripple effects of job losses go throughout the American economy. One of the saddest parts of this story and yes it is the saddest part is that a lot of these voted for Trump. These are red staters. They are the ones who according to every available report at this point are going to suffer disproportionate losses compared to the rest of the population because of Donald Trump’s trade wars.

They’re the ones. They put him in office and now he’s screwing them over. That is sad. That’s the livelihood of a lot of people. Whether you’re a Trump voter or a Hillary voter or a Jill Stein voter or Gary Johnson, I guess, look, we don’t want you to suffer. We don’t want you to be unemployed or be homeless or lose the thing that you’ve built your life towards building. I don’t think anybody wishes that on anybody else. It is sad for these people, but a lot of us did see it coming and we tried to warn them. I hope that they go forth from this realizing that they got conned by this jackass who shouldn’t be running the federal government anyway and I hope that they learn something from it and I hope they remember that next time they go to vote.

This is their livelihood and Donald Trump is playing a game with it because he thinks he can outmaneuver China on this issue and that’s never going to happen. Republicans in Congress are too spineless to stand up to him on this. Yeah. They’re going out and they’re doing interviews and they’re saying I don’t agree with him on it, but unfortunately my backbone was removed a few years ago so there’s nothing I can do to stand up to him about it. That’s a lie. They could stand up to him. They could pass legislation. They could do a number of things to put the reigns on Donald Trump and stop him from destroying the entire United States economy, but they won’t do it because they’re afraid he’s going to send out a nasty tweet about them.