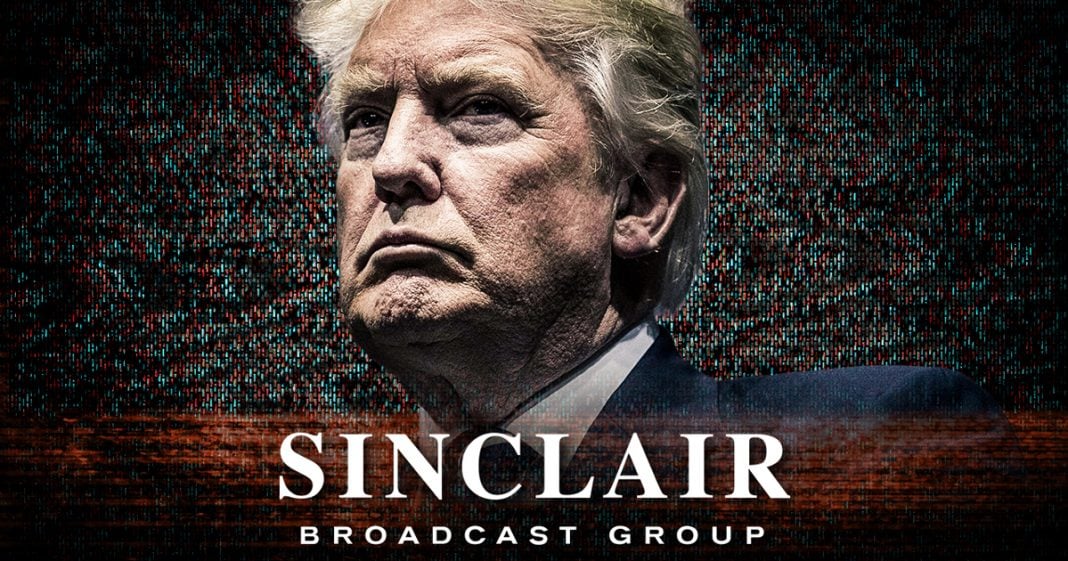 According to a former staffer at the Sinclair Broadcast group, Donald Trump could have never won the presidential election had it not been for Sinclair’s propaganda outlet. There is a lot of truth to this, as media outlets (both Sinclair-owned and others) gave Trump billions of dollars worth of free advertising and interviews while constantly berating his opponents in the primaries and the general election. Ring of Fire’s Farron Cousins discusses this.

With the entire story surrounding Sinclair Broadcasting still blowing up all over this country, a recent former staffer of the network came forward not long ago to say that if Donald Trump hadn’t received the support that he received from Sinclair Broadcasting, he likely never would have become president in the first place. This former staffer, Jonathan Beaton, actually says that Sinclair is the reason why Donald Trump made it into the White House with all of their positive propaganda style coverage of his primary and his campaign.

To be perfectly honest, that is about as true of a statement as you’re going to hear from anybody that ever worked at Sinclair. You see, the problems with Sinclair stretch way back to before Donald Trump even came on to the political scene. Back in the day during the Bush administration, they had this guy named Dr. Mark Hyman that would produce these prepackaged segments that would then run on local news channels. He talked about things like the benefits of privatizing social security all the while the news networks kind of positioned him and presented him as if he was just a local guy giving his opinion on your news station. It turns out he was actually an executive with the network filming these little must run packages back in his office at Sinclair headquarters. But, the coverage that this network gave Donald Trump and the deal that they allegedly worked out with Jared Kushner absolutely helped to bury some of the scandals that should have buried the Trump administration before it even began.

I mean, when you look back at that Access Hollywood tape and you listen to it again and again, you have to wonder why anybody in this country would vote for this guy unless you have something psychologically wrong with you and yet they did anyway. Why? Because you had outlets like Sinclair, you had the Fox News, you had those people telling us it wasn’t a big deal. It was locker room talk. Trying to write it off and change the subject to the fact that Hillary Clinton is stupid with email and the idiot public bought it.

As much as we want to blame Sinclair for this and they’ve got plenty of blame to take as does Fox News, we also have to blame the public. That’s it. We are so stupid collectively as a country that we bought into the media distractions. We’re so stupid and dysfunctional as a society of thinking people that we have allowed reality TV to dominate the airwaves and, hell, we even put one in the White House now because of our short attention span, our inability to think critically for ourselves and our dependence on corporate controlled media. Yes, the media deserves most of the blame for this. But if you think for a second that the people in this country who are brainwashed by the corporate media don’t deserve some of the blame, then you’re absolutely kidding yourself because the corporate media would not be successful with this propaganda if we weren’t, as a whole, incapable of critically thinking about issues.