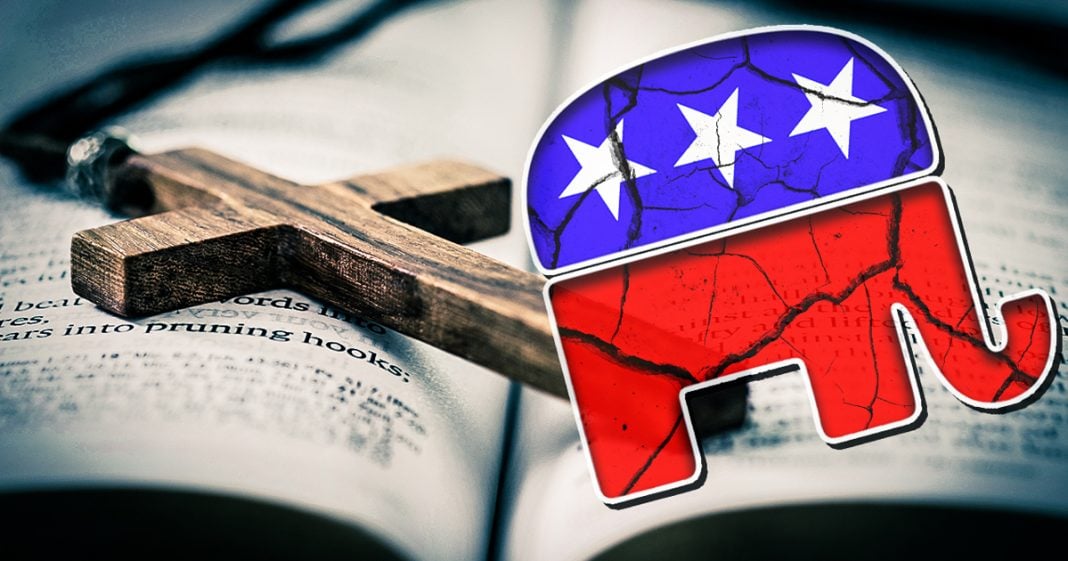 There is no area where the Republican Party and Christianity intersect, and yet far too many Christians claim that they vote for Republicans on religious grounds. This is pure hypocrisy – you can’t be both a good Christian and a Republican loyalist, as the two truly are mutually exclusive. Ring of Fire’s Farron Cousins explains this.

With Easter and Passover recently happening, it made me start wondering: is it possible to be a good Christian and also be a member of the Republican party? The answer is absolutely not. Those two things really are mutually exclusive.

There is no overlap between being a good Christian and being a member of the Republican party. Now, if you’re not a Christian, sure, absolutely, the Republican party is the best place for you to go because it is a completely immoral, unethical, garbage heap that doesn’t care about anything or anyone unless you’ve got millions of dollars, and even more so if you have billions of dollars.

But I woke up on Easter morning and I’m looking on Facebook and I’m seeing all these posts from people that I’m friends with, went to high school with, about “Happy Easter, He is risen, Christ the Redeemer,” and all that crap. I also see these people talk shit about Democrats on Facebook, and talk about why Trump is actually doing a really great job, and he is a good Christian. No, he’s not. He’s absolutely not, and you’re lying to yourself if you think that Donald Trump has any bit of Christianity inside of him. I guarantee you that idiot couldn’t even tell you what the Ten Commandments are. He probably couldn’t even name two or three out of all of the apostles.

But that’s the problem with the religious right here in the United States. They vote based on their religion, but not even just their religion. They vote based on one issue, that their religion, their warped view of Christianity, tells them they should vote based on, and that’s abortion. Every religious right voter in this country votes based on abortion. Show me one that doesn’t. Show me one that says, “Yeah, well, the Democrats want abortion, but I’m going to vote for them anyway because we have this psychopath philanderer talking about grabbing women by the pussy and as a Christian, I can’t vote for that.”

Yeah, they didn’t do that. They voted for the pussy grabber instead of the person who says a woman should have the right to choose with their body. That same person who thinks women should have to right to choose also believes that we should take care of the less fortunate in this country. The Republicans don’t do that, and I guarantee you, because I’ve read the book, there’s a lot more passages in the Bible about taking care of the less fortunate and providing care for the sick and the elderly than there is about abortion. There’s also plenty of lines about slavery and things like that, but we’ll save that for a different day.

Bottom line is this: you can’t be a Christian and also be a Republican, because everything that the Republican party stands for goes against every single thing in that Bible. If you want to call yourself a Christian, then you need to look at what’s going on with this Republican party, and ask yourself, “Where in the Bible does it say that any of this garbage, any of this nonsense, is actually acceptable?” Because I promise you, you’re not going to find it.