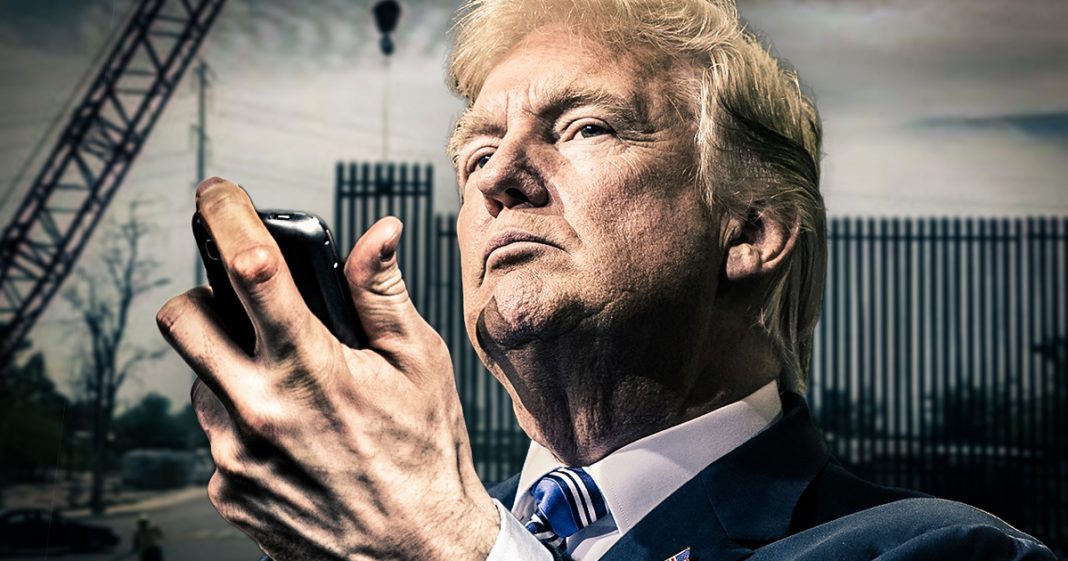 On Wednesday of this week, Donald Trump tweeted out a series of pictures that he claimed were portions of his border wall being constructed. After a quick fact check, it was revealed that the pictures were actually taken years ago and they depicted an already-existing piece of fencing that was being repaired. Either Trump is knowingly trying to convince his base that he is still going to build a wall, or he is too stupid to realize that his wall is currently NOT even under construction. Ring of Fire’s Farron Cousins discusses this.

On Wednesday afternoon, Donald Trump was absolutely delighted about the fact that construction along a southern portion of the border wall was coming along so nicely. He tweeted out the following. He said: “Great briefing this afternoon on the start of our southern border WALL … WALL was in all caps for some reason.

But then attached to the tweet was several pictures of construction of what looked to be the wall. It looked like, “Hey, the wall’s going up. Donald Trump is keeping his horrible promise there.”

But as it turns out, those photos were actually from 2009. Those pictures were almost nine years old. And they actually were just showing a piece of border fencing that was being repaired at the time. So, either Donald Trump doesn’t know that his own wall is not being built or he figured he’d go ahead and try to dupe his idiotic base by tweeting out these pictures assuming that nobody would try to fact-check the guy that lies all the time.

Donald Trump, and this is the thing about stupid people, stupid people think that everybody else is as stupid as they are. That’s something everybody needs to remember. That helps to explain a lot of what Donald Trump and Sarah Huckabee Sanders and Kellyanne Conway, it explains a lot of what this administration does. Stupid people think everyone else is just as stupid as they are, so they think they can get away with these kinds of stupid lies that they tell on a near daily basis.

I don’t think Donald Trump accidentally attached those pictures to his tweet. I don’t think that Donald Trump doesn’t know that his wall is not currently under construction. No part of Donald Trump’s wall is being built right now. Not one single inch of it. And yet he tweets this out probably to get his base happy because they’re pretty pissed off right now and Ann Coulter is leading the charge on that because he’s not building the border wall.

So he assumed he could just pull one over on everybody and say: “Look, here’s some shiny pictures of a wall, please love me again because you’re all I have in the world.” Not gonna work. I’m sure there’s some conservatives that believe the pictures and, you know, they probably hear the fact-checking and say it’s just fake news. But it’s not. It’s reality.

Not one square inch of Donald Trump’s border wall is currently under construction. They’re still going through prototypes. I don’t even know if they’ve made that see-though wall that he wants so badly. But he thinks that he can continue to lie to the American public and that we’re all just as stupid as him and that we’ll just believe whatever he says. That’s not how America works. Yeah, there’s lots of stupid people here, just like there’s lots of stupid people in every country. But there’s not enough stupid people in here to approve of what Donald Trump is doing or to buy into his lies.