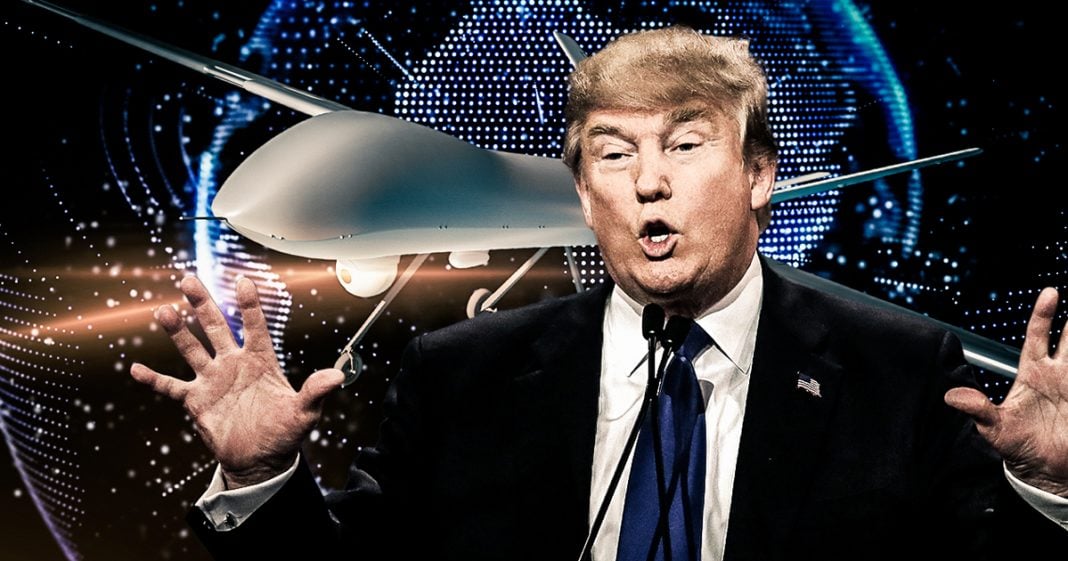 According to a new report in The Washington Post, Donald Trump asked a CIA official why a recent drone strike didn’t also kill the target’s family, something that Trump pledged to do while running for President. Trump’s foreign policy is a disaster, and his desire to wipe out as many people overseas as possible should send shivers down the spine of every American citizen. Ring of Fire’s Farron Cousins discusses this.

According to a new report by the Washington Post, Donald Trump was recently shown a video by the CIA of a drone strike that took place in Syria. Now, he was unhappy with the results of this drone strike and here’s why. While watching the video the CIA said that, hey, we waited for the guy to be away from his family before we targeted him and fired the drone, the missile, bullets, I don’t know what comes out of drones. Anyway, that’s what they did. So they took him out and not his family to which Donald Trump reportedly said, “Why did you wait? Why not just take out the whole family?”

Donald Trump is upset because the CIA didn’t bother to kill innocent civilians with a drone strike. To be perfectly fair here though, taking out a terrorist’s family is exactly what Donald Trump promised to do during his campaign. He said those exact words. We’re gonna take them out. We’re gonna take their families out. That is what he wants to see the CIA doing. This is not sociopathic behavior. This is psychopathic behavior. Donald Trump is mad that the CIA did not cause enough carnage over in Syria and did not kill enough people who had not been accused of a single crime.

Their only crime was being a family, having a family member that was a CIA target. That’s not a reason to die. In Donald Trump’s book it absolutely is. We gotta take out the whole family tree if any one branch the CIA has deemed to be a target. This is what is wrong with United States foreign policy today. They don’t care about the collateral damage and hell, Donald Trump by his own admission here wants to increase it. In his mind there is no such thing as an innocent bystander or civilian casualties. They’re all targets.

Everybody walking around in Syria has a target on their back placed there by Donald Trump himself. I guarantee you if he gets more control over this and he starts directing them to bomb and missile and shoot indiscriminately we’re gonna see those already increasing number of civilian deaths overseas skyrocket in the next few months because Donald Trump thinks that those deaths actually help his approval ratings.