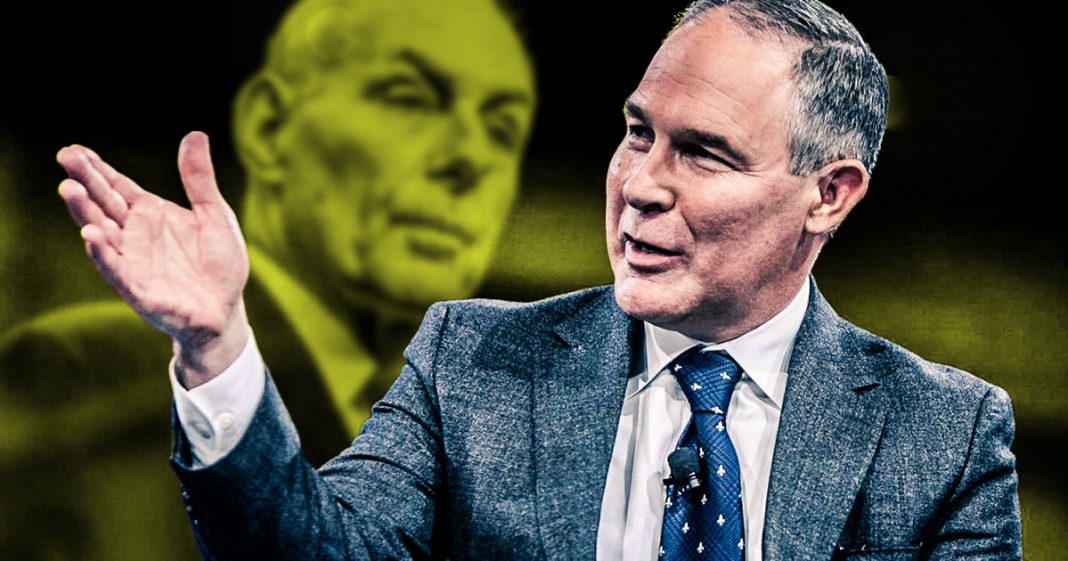 John Kelly, chief of staff to President Trump, refuses to take any action against swamp monster EPA head Scott Pruitt, and instead issued a bland warning that he needs to knock it off with the scandals. Simply asking a corrupt individual to stop being so corrupt isn’t going to work, and Kelly needs to show a little more fortitude if he wants to save this administration. Ring of Fire’s Farron Cousins discusses this.

According to a recent report, John Kelly, Donald Trump’s chief of staff, made a phone call recently to EPA head Scott Pruitt to tell him to just knock it off with all of those horrible scandals that are embarrassing the Trump Administration. According to people inside the Trump Administration what they told reporters at the Daily Beast was that it was absolutely not a friendly buck up call whatsoever. John Kelly totally meant business with Scott Pruitt.

This story actually highlights how ineffective and basically pathetic John Kelly’s role is at the White House. Scott Pruitt deserves to be fired and hell he deserved to be fired before any of these scandals even came out. Because the environmental damage he’s causing is far, far worse than any of these scandals. But the media only wants to talk about the scandal, so let’s run down just a few of them real quick.

Obviously we have the $50 a night luxury condo that he was renting from lobbyists literally sleeping in a lobbyist bed. There’s the fact that he wanted his motorcade to run their sirens so that he could get to dinner and get to the airport on time. There’s his 20 person personal security detail that is costing tens of thousands of dollars. His $42,000 private soundproof phone booth. His other travel expenses, all of that yeah. Scott Pruitt is absolutely the swampiest swamp monster in the Donald Trump swap today.

But again, the environmental damage that this guy is trying to do is so much worse. That is what is missing from every single one of these stories about the Scott Pruitt scandals. They can fire him, they can replace him with somebody else who may not go on a spending spree like Pruitt. But they’re going to inflict the exact same environmental damage and then the press is going to stop paying attention because nobody seems to give a damn about stories about climate change or environmental pollution or corporate malfeasance, and poisoning entire cities.

They just want to talk about the scandals. John Kelly is doing absolutely nothing to reign in this administration. He is useless in the Donald Trump White House. If he wanted to save face, he could easily go up to Trump and say, “We need to fire Pruitt.” If Trump says no, he should go to the media and say, “I firmly support the firing of Scott Pruitt.” It’s up to Donald Trump now, put the pressure on him. But Kelly won’t do that, Kelly understands, he came in here, he was going to be the adult in the room. But he has effectively been neutered in this position by working for a guy like Donald Trump who doesn’t want to listen to anybody’s advice.

So he’s going to make a phone call to Pruitt and tell him, “Hey, you better knock it off because this is real, real bad optics for the administration, but he’s not going to do anything about it. And more importantly, he’s not going to do anything about the rampant environmental destruction that’s being caused under Scott Pruitt’s watch. For once I would love to see the media focus on that rather than these scandals.