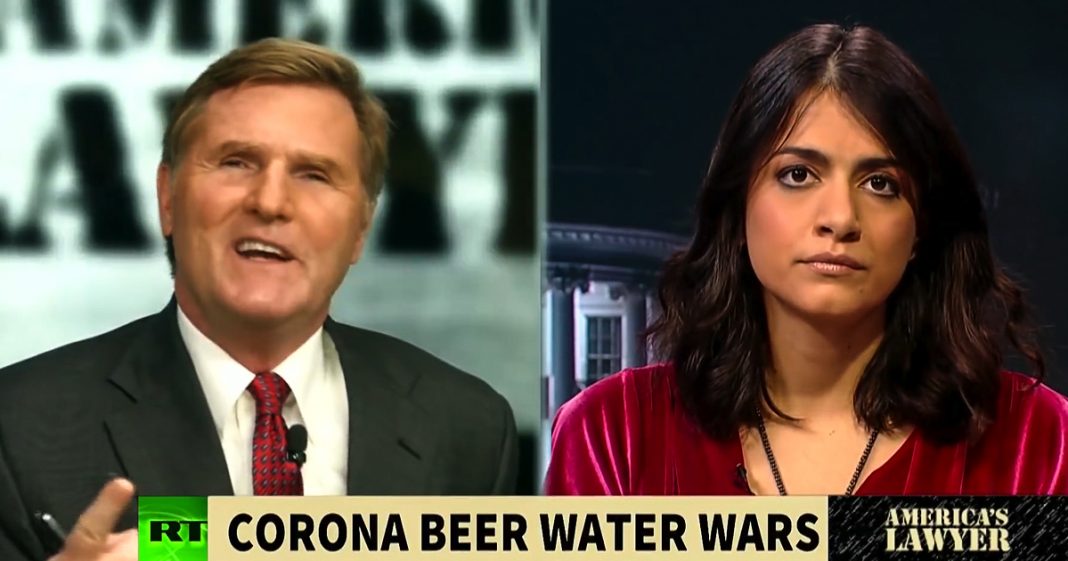 Via America’s Lawyer: Mike Papantonio is joined by Anya Parampil to give the details on how the Corona beer producer is aiming to take the water rights of Mexicali residents.

Mike Papantonio: Mexicali residents are engaged in a water war against big beer corporations Constellation Brands. Residents say their district is suffering from water scarcity and giving up their water rights to the company to make beer exclusively for American consumers will only make things worse. Joining me to talk about this is RT Correspondent Anya Parampil. Anya, let me ask this. What is Constellations Brand and what do they market in America?

Anya Parampil: Hi Mike. Well, Constellations Brands is a major Fortune 500 company which markets beer, wine, and spirits and produces that in the United States. Viewers will probably recognize their beer brands most readily, Corona, Modelo Especial, Negra Especial, and also Ballast Point, they recently purchased in order to kind of break into the craft beer market. These beers make them the largest beer import company in the United States. In addition, as I said, they also produce wine and spirits such as Svedka vodka.

Mike Papantonio: Anya, give us an idea of what the water situation is in that part of Mexicali. How bad is it? We know about the droughts, but how bad has it become?

Anya Parampil: Sure, Mike. It’s pretty bad. First, let’s understand where Mexicali is. It’s the capital of the state of Baja in Northern Mexico. Residents’ access to water is already quite bleak. This is a very dry and hot part of the continent. Temperatures in Mexicali reach 125 degrees Fahrenheit, and there’s almost no rainfall. They get about 3.1 inches of rain a year, which, just to give you an idea even compared with a city like Los Angeles, which we consider fairly dry in the United States, they get about 15 inches.

As a result of all of this, residents in Baja have little to very little access to water. The government says about 300,000 people there have no access to water. 6% have no access to running water. Keep in mind this is just for regular household chores, cleaning, gardening, that kind of thing, because the tap water in Mexico is already unsafe to drink. People there have to depend on private corporations to buy their money or local governments, and now that’s why they’re saying this deal with Constellation will only make their situation worse considering the national water authority, Conagua, already estimates that 37.5% of the country’s aquifers are overexploited.

Mike Papantonio: Yeah. Anya, it looks like a big water grab all over. The biggest corporations in the country are … Nestles, for example, is just going all over the planet, taking people’s drinking aquifer. They’re denying that it’s going on but it is happening. They’re pumping places … California, where there’s droughts going on, Flint, Michigan, where the water is already destroyed. They’re traveling all over the globe, buying up some of the biggest aquifers in the world.

We’ve done stories on this, but it seems like almost … The American public looks at and it’s almost like a yawn moment, like “It doesn’t really affect me.” It does affect you because they’re trying to privatize the very water that you should have access to as a matter of right. Look, has Constellation made any public comments regarding the complaints of local residents? What’s the position of Constellation? What are they saying here?

Anya Parampil: Well, NPR asked them exactly about this very issue, and this was the response that Constellation came up with. They said “A company like Constellation Brands is managed with international standards in terms of high ethics and values. Constellation Brands has been in the US for more than 70 years and for a company to have that kind of permanence, it has to be managed with high national and international standards of ethics and values and the care of the environment and natural resources. It’s implicit.”

Now, Mike, you probably know better than anyone else that that’s not the case. Just because a company or a corporation is successful or has been around for a long time doesn’t mean they’re operating in an ethical or, for that matter, legal way.

Mike Papantonio: Well, one thing corporations do … and we see it with all the major, major corporations. I see it all the time when we’re getting ready to go to trial. Matter of fact, I’ll be starting a trial against Monsanto in the very near future, and what we’ll see is Monsanto coming into the place that we’re doing … where that case is going to be tried and talking about all these feel-good ads, like “We’re part of your community. We paid for this softball team. We do all these wonderful things.” They will spend millions telling that lie, making people understand something that they … where they drive the conversation. They have you ignore the real conversation, which is, in that case, Monsanto’s making a product that’s killing people.

In this situation, Constellation Brand is stealing water that’s vital to these people to be able to stay alive. So all of this feel-good PR stuff has been well-focused and thought out for a long time. Look, activists say that there are government officials who are working at Constellation Brands with them to try to accomplish this, to try to steal water, and they’re working in that professional capacity. Is there any proof of this? Do we know that we actually have these corporate officials that are part of the big theft here?

Anya Parampil: Well, there is great evidence, and we do know their names. I’ll get to that in a second, Mike. First, I just want to explain to viewers how we got into this situation, and that really started with the establishment of NAFTA in 1994. Then, we had many industries run south of the border to get cheap labor and resources. It turns out the beer industry was no exception. As a result of NAFTA, Mexico actually became the number one exporter of beer in the world, and activists will say this transformed many local governments into an extension of corporations when it comes to the issue of who these people actually represent.

For example, NPR reports the legal representative for Constellation Brands, Sergio Eduardo Montes Montoya, also works in the Mayor’s Office as the director of urban administration. Senador Victor Hermosillo Celada’s company, Hermosillo and Associates, is leading the construction of the multi-billion dollar brewery and speaks openly about his political business dealings. Additionally, Mike, the Governor of Baja, Francisco Vega, actually introduced a bill which would have given private corporations access to the state’s water supply and allow them to tap into it. Due to public outrage and protests, this bill was walked back. But as we’re seeing now, they didn’t need legislation like that to go in and say “We’re going to open up a brewery and tap your water resources.” So it certainly does give people cause to say there might be some corruption in the high level of government if people working in the city also are working for Constellation.