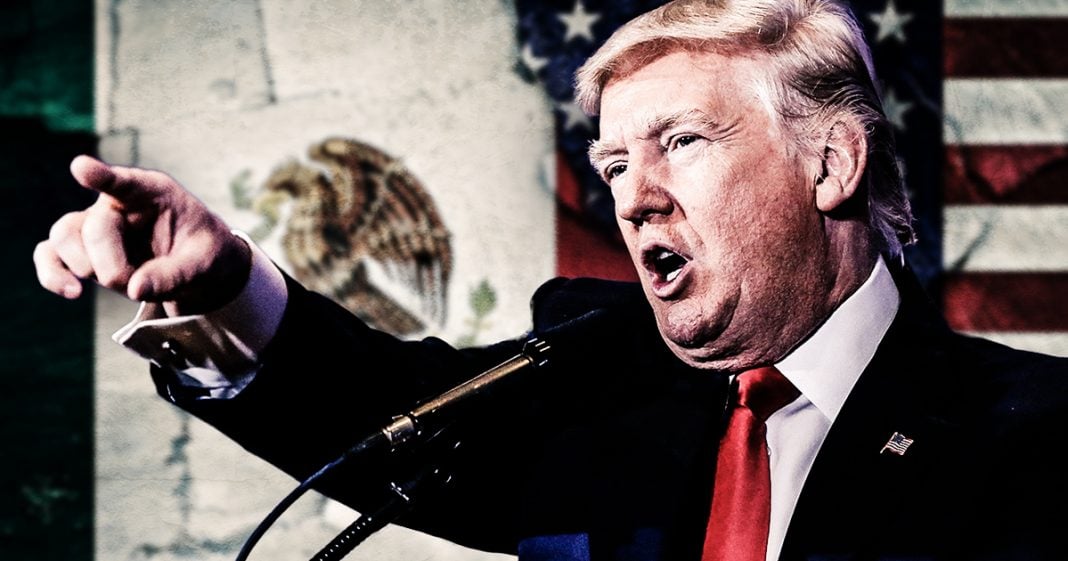 President Trump has decided that he can’t wait for his wall to be built, so he’s sending the National Guard to defend the Southern border of the United States. This is a very dangerous move that will put countless lives in peril, and push the United States one step closer towards being a fascist regime. Ring of Fire’s Farron Cousins discusses this.

Donald Trump has decided that he wants to move the United States just a few more inches closer towards complete fascism, and he’s going to be sending the National Guard to defend the southern border between the United States and Mexico. Now, the first thing we have to understand about this is this order that he’s signing is actually a request for the states along the border to send the National Guard there. Trump has to get their permission under the way, the specific way that they’re doing this action, so if the governors of those states choose to not send the National Guard, they will not have National Guards, but so far it appears that everybody is going to play along with Donald Trump’s little military games here and send their National Guard troops down to the border.

When you think about the countries that put armed military guards along their borders, are those countries that you’d want to go to? Are those places where you would want to live? Places like North Korea, you know? They did it in Europe in many countries during World War II. That is what Donald Trump is going here in the United States, and to be fair, George W. Bush actually in 2006 sent about 6,000 National Guard troops along the Southern border. Barack Obama sent about 1,200 during his time to stop drug smuggling, but this one with Trump here is a little different because he’s basing his decision here on a phony Fox News report. Fox News reported recently that there were caravans of illegal immigrants coming across the border. They were headed that way. They had footage of these alleged caravans of illegal immigrants that were supposed to be coming across the border.

It wasn’t true. It was completely fabricated. Yet Donald Trump, who gets 100% of his information from Fox News, saw that, tweeted about it, and now we have to send our National Guard, spend money that we don’t have to protect against people who aren’t even coming here. That is how insane this man and this plan truly are, but we’re living in a military state now, folks. That is what Donald Trump is pushing us towards, because right now it’s the Southern border; what’s going to be next? It’s never going to be enough for this guy. He wants to make sure that this country is just as lily white as his voting base, and he’s going to do whatever it takes, spend however much money that we don’t have, that he has to, just to make sure that he gives that alt-right base a few crumbs here and there saying, “Look what I’m doing” to keep out these non-white people from getting into the United States, and again, it’s all based on a Fox News lie.