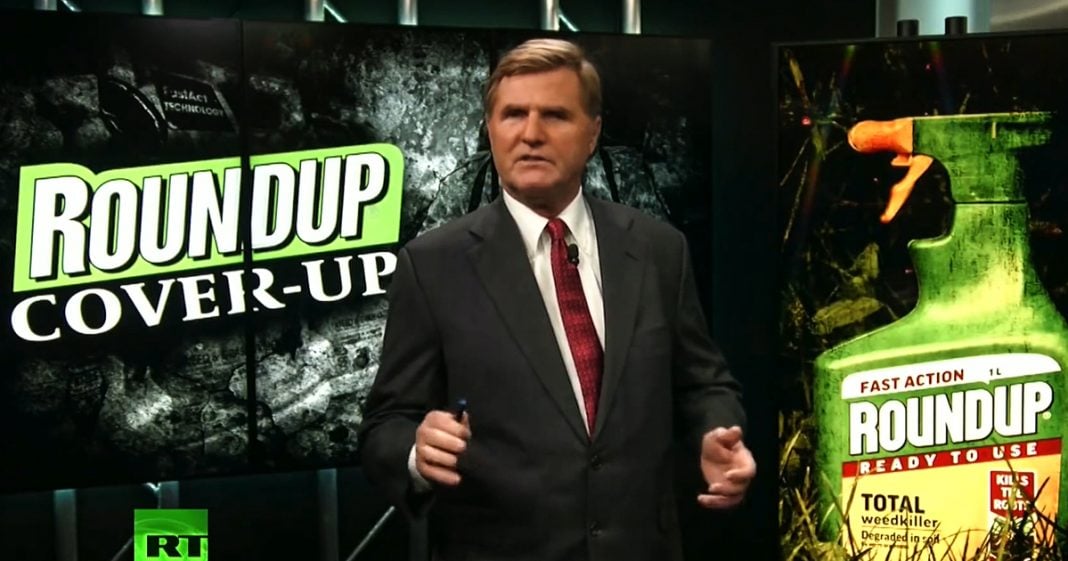 Via America’s Lawyer: Mike Papantonio and Carol Moore talk about an investigation that found hazardous chemicals in regularly consumed foods and drinks in America.

Mike Papantonio: Monsanto will make more than two billion dollars this year from the sales of Roundup. Their blockbuster weed killer has been the most popular herbicide on the planet and has brought the company billions upon billions of dollars in profits ever since it was first introduced. So it should come as no surprise that the company’s doing everything they can to convince people around the world that their cash cow is perfectly safe but the claims being made by the company about Roundup safety don’t fit in with what science is telling us.

Independent scientific studies have linked exposure to glyphosate a variety of different illnesses including Non-Hodgkin’s lymphoma, brain cancer, breast cancer can kidney disease just to name a few. All the while Monsanto has been telling consumers that their product is safe enough to drink straight out of the bottle, though executives have repeatedly refused to demonstrate this when asked by reporters. As lawsuits against the company keep growing, Monsanto is now going to have to take their tired and weak defenses to the courtroom where juries will be soon deciding whether or not consumers can hold the company liable for the diseases that science is blaming on this corrupt company.

Joining me to talk about this is Carol Moore, probably one of the country’s most aggressive legal investigators working on this Monsanto case. Carol, Roundup, they’re finding it in beer and wine. That’s the latest story that’s coming out where they’re doing testing and the residue of Roundup is being found in the wine that we think is safe or the beer that we think is safe. What are you finding in your investigation?

Carol Moore: Well interesting enough they found it in Gallo, Mondavi, Barefoot, Sutter Home Wine, Yellow Tail, all these popular wines that we Americans enjoy and they’re finding it in parts of per billion that would cause illnesses such as breast cancer. And then they found it in beer. Beer’s one of the most popular American alcoholic drinks we have and they found it in beer. It’s rather alarming and I would think American consumers would be alarmed.

Carol Moore: You know and I’m talked about the wine and disappointed to see that but then I would get a really big surprise also this week when we learned that they had detected it in baby infant formula, soybean infant baby formula at 170 parts per billion. And they have no idea how children are going to react to this, what diseases it may cause. But we do know childhood diseases are on the rise, birth defects are on the rise.

Mike Papantonio: Carol, how long have they had this information? You’ve been probably one of the chief investigators looking at this. When did they start learning A, that Roundup has the ability to cause cancer and B, when did they start learning that this is a residue from Roundup that can be found in baby formula as you point out, the food we eat? In a minute I want to talk to you about the list of foods that we eat every day and talk about how much Roundup glyphosate is found in those products. But when did all this really start developing? As you’ve investigated this, what is that time where they knew something’s wrong here?

Carol Moore: Clearly in the 80’s there were studies that show that it would cause tumors in rats and mice. Then more importantly then in the 90’s they would say tumors of different locations in the bodies. That’s a precautionary principle sign that said you’ve got to tell people this. And then Hardell found the link to Non-Hodgkin’s lymphoma in the 90’s. So it’s been out there for several decades now.

Mike Papantonio: Well you mentioned the precautionary principle. The precautionary principle is about if I understand it correctly, you may not have all of the information, you might even have two studies that disagree with each other. One study says clearly cancer, one study says maybe cancer. But the requirement for the company is to give the consumer a choice. Say to the consumer, I’m going to disclose what we found. We found cancer in monkeys, we found cancer in rats, these studies are also showing things like Parkinson’s disease, they’re showing things like, with children, a whole host of different cancers with children.

There are studies that vary. One study may show this, another study may not be as strong as that. But, under the precautionary principle as you point out, the responsibility of the company is to let people know that and then let them make the decision as to whether or not they want to use this product. Isn’t that kind of what that’s about?

Carol Moore: That’s absolutely what this is about and it’s telling the mothers of these children that are put on soy-based infant meal, this has a Roundup residue in it and you have to know to make the choice … not on the label and Roundup and Monsanto is not telling you, you can’t make the choice.

Mike Papantonio: Well, the World Health Organization came out with a study that was very clear. They came out and they said, we’re not guessing here. The World Health Organization made the statement that we want to tell you that there’s a probable relationship between Roundup and cancer. Okay, so that’s behind us. Tell us a little bit about how important that study, who was involved and how serious that study was that right now Monsanto seems to totally want to distance themselves from. What was your take on that study?

Carol Moore: There were 17 scientists that made that study and came together from 10 different countries across the world. They had no political agenda, they were world renowned, very respected scientists and they came up with that conclusion. And then after that, 94 other scientists from 27 countries came out in full support of this decision that Roundup is a probable carcinogen.

Mike Papantonio: What have you seen as you’ve done this investigation when the World Health Organization comes up? For example, 17 scientists around the world, they don’t have any agenda, they’re not working for any entity that’s in competition with Monsanto. 17 scientists from all over the world say yeah, this will cause cancer. Then as you point out, 92 or 94 scientists come out and say we agree with that. What is Monsanto doing here? What are they doing to try to discredit these scientists? What kind of steps have you seen them taking?

Carol Moore: Well, they’ve been across the board. They took this right at these people. They went right at these people, they tried to subpoena, they tried to contact them personally. They’ve been going to the EPA, telling the EPA you’ve got to stop this. They’ve gone to every legislation in the United States and across the world saying we’ve got to shut this down. They have had their own study written by their own team that is totally written by Monsanto but they put it out as it was written by other experts. So they’ve done everything they can to suppress the truth from the consumers of the world.

If I were to take those four studies for example, every one of those studies were attacked, not just mildly attacked but the people who actually wrote the stories were victimized by the company. The company would go after them in the university that they worked, in the laboratory that they worked. They put political pressure on those scientists who said that. As a matter of fact, I’m sure you know more about this than I do but right now the World Health Organization is under attack to where they’re going to lose their funding from the United States because Monsanto has such political influence that they’re getting congressman and senators to say let’s not fund the World Health Organization because they’ve now said that Roundup will cause cancer. Did I get that right?

Carol Moore: Absolutely. We’ve seen documents were written directly to members of Congress of the United States saying we don’t want this organization funded any longer. They’re writing those letters every day to try and shut this down so that consumers won’t know the truth and won’t be able to make that important choice.

Mike Papantonio: You have some cities and counties around the country that are banning the use of Roundup. Give us a thumbnail sketch of how active that’s becoming where the city or the state says you can’t even use this stuff in our city. Talk about that a little bit.

Carol Moore: Well I think one of the most important one that we need to look at is the city of New York has banned the use of Roundup in any public right away and specifically in childhood playgrounds. It’s terrible because we know that Roundup has an ability to be absorbed dermally through the arms or face or legs of these children. So, New York City just said we’re not using this anymore, we’ll find an alternative. So they no longer use Roundup and they passed that resolution in 2015, they passed it in 2016. We’ve seen other countries like the Netherlands say no more Roundup for us. That’s a position that a lot of other states should take and pattern our behavior after those same countries and states that are doing that.

Mike Papantonio: I talked about food studies that have shown Roundup is becoming increasingly common in food. Give us a rundown just basically what those numbers look like. Parts per billion when they’re finding glyphosate Roundup in the actual food, will you give us kind of rundown.

Carol Moore: It’s interesting. A lot of mothers, new mothers feed their children Cheerios and Cheerios has been tested for the residue of Roundup at 1124 parts per billion. And then you’ve got things like Oreos, everybody loves Oreo cookies, 400 parts per billion. Little cheese and crackers, these are things that you think might be healthy for your children and yet we don’t know that they have this residue.