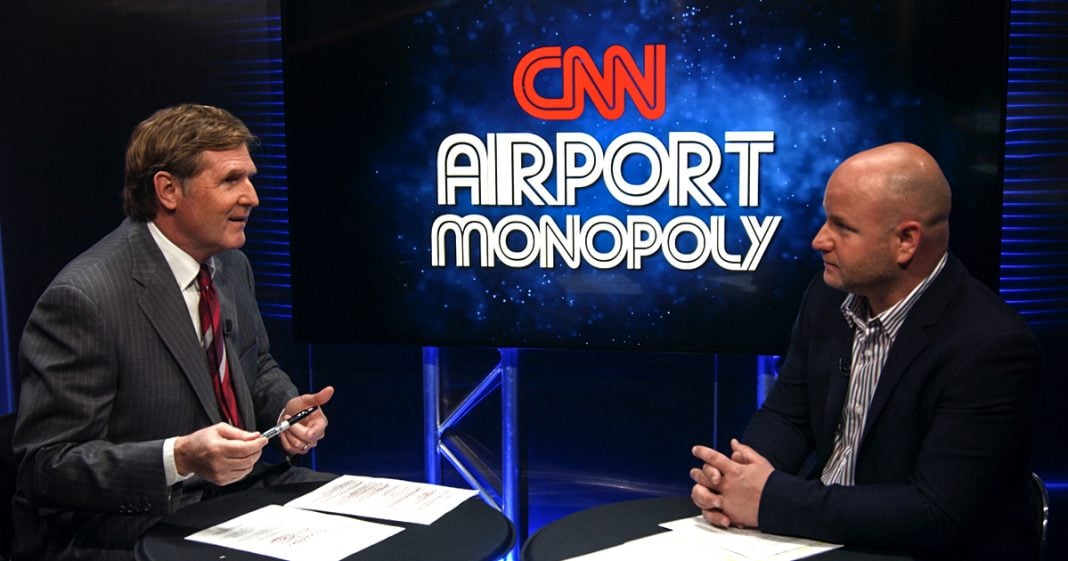 When you walk through the airport, you may notice that all of the TVs around you are tuned to CNN. This isn’t a coincidence. The war-mongering network has a virtual monopoly on airport TVs, forcing airline passengers to watch their corporate-sponsored content. Ring of Fire’s Mike Papantonio and Farron Cousins discuss this.

Mike Papantonio: When you walk through the airport, you may notice that all the TVs around you are tuned to CNN. This isn’t a coincidence. The war mongering network has a virtual monopoly on airline TVs, forcing airline passengers to watch their corporate sponsored content. This is an interesting story to me.

Do you remember the run up to Iraq? You would walk through an airport and I have never seen such war mongering as was coming from CNN. Remember the big maps they had on the floor? Wolf Blitzer would walk around and, “We’re sending in our troops here, and we’re sending in reporters.” It was like they couldn’t wait to get to war. Everybody walking through an airport thought, “Oh my god, Iraq, they’re responsible for 9/11, Saddam Hussein, he’s at the heart of all this.” CNN, along with the other cable sold that story. Right?

Now, just like back then, you’re going to walk through an airport and all you’re going to see on the TVs is CNN, and it’s because that they’ve worked out this deal, these contracts to be the only network that can be shown in the hallways or in the waiting areas at the gates at airports. You have no choice.

Mike Papantonio: Well, the reason this is such an important story to me is, it wasn’t just Iraq. It was Syria. The next thing, we got to go to Syria. Go all the way back to Iran. Where do they make their money? Where does cable make their money? It makes it in the … Now they’re trying to sell a war with Russia. I mean hell, we’ll be having ballistic missiles between the US and Russia if CNN gets its way.

Here’s my point about this. If you look at trends, you’ve done so many stories on trends with cable to begin with. Your theory is that cable is almost RIP, it’s almost RIP cable. Rest in peace cable, where do you see this kind of story fitting into where things are going? I mean, we should be able to walk through an airport and not be confronted with this.

Farron Cousins: I think so. I think there’s absolutely no reason to have a network like CNN. When you’re traveling you don’t need to be subjected for this. Again, this is essentially, for the most part this is corporate propaganda. They’re doing this, they’re selling wars. They’re selling Saudi Arabia and Yemen right now, pushing for more attacks, more missiles, more bombs, because then the commercials come on and it’s a commercial for Boeing. Okay, well, who’s watching CNN that’s going to go out and say, “You know what? I’m going to go buy a Boeing …”

Farron Cousins: Nothing about that makes any sense. Then the other half of the commercials on there are pharmaceutical, so they’re not going to talk back about pharmaceutical, they’re not going to talk bad about war. They’re going to help sell it. You’re not getting actual news. You’re really not. You’re getting a watered down … The only time CNN is happy with Donald Trump, remember after they all said, “Well, now he’s presidential,” was after he sent all of those missiles over to Syria.

Mike Papantonio: Yeah, I remember that. Yeah, he gets involved with escalating war, bombs Syria, and CNN, “Now this is presidential.” I mean, you got to wonder, who in the hell are the people making these decisions behind, but here’s the point. Look, if I’m making this argument, I’m saying this. Taxpayer money subsidizes airports. Taxpayers pay for infrastructure, they pay for a lot of things on the airport. Taxpayers are now going up to the people who work in an airport saying, “Turn off CNN. I want to watch something else or I don’t want to watch anything.” Do they have the right to do it? Yeah, they have the right to do it. Your point is, why have anything on the screen? You say, why not simply have expanded WiFi ability at an airport to where people are going to use their personal devices anyway?

Farron Cousins: Exactly. When you have CNN, these were up for contracts and CNN bid to pay the most to have it, so technically we let the corporation come into this taxpayer funded thing and buy it. We don’t get the profits from it at all. We’re just subjected to constant war mongering. They could have had companies come in and say, “All right, we’re going to bid on who is going to provide the free WiFi for everyone in this airport,” and then when they connect you get a quick little ad that pops up, they close it, but they know that you paid for it and then that’s it. They can look and watch at whatever we want. I mean, we got these monitors, show funny cat videos or something. It doesn’t have to be CNN.

Mike Papantonio: Exactly, but there was a day when CNN even with their war monger history was considered the most neutral. If you can imagine, they were the most neutral network. Then Zucker comes in, Zucker, he comes in and he says, “Look, all that really matters are ratings, so we escalate the possible war with Russia, we escalate, Trump becomes a hero when he bombs Syria.” I mean, we got to do something about it. I think there is the argument that there are taxpayer rights here, and if we’re subsidizing the airport in any kind of way with tax money, people shouldn’t be subjected to what they think is a total fraud to begin with.