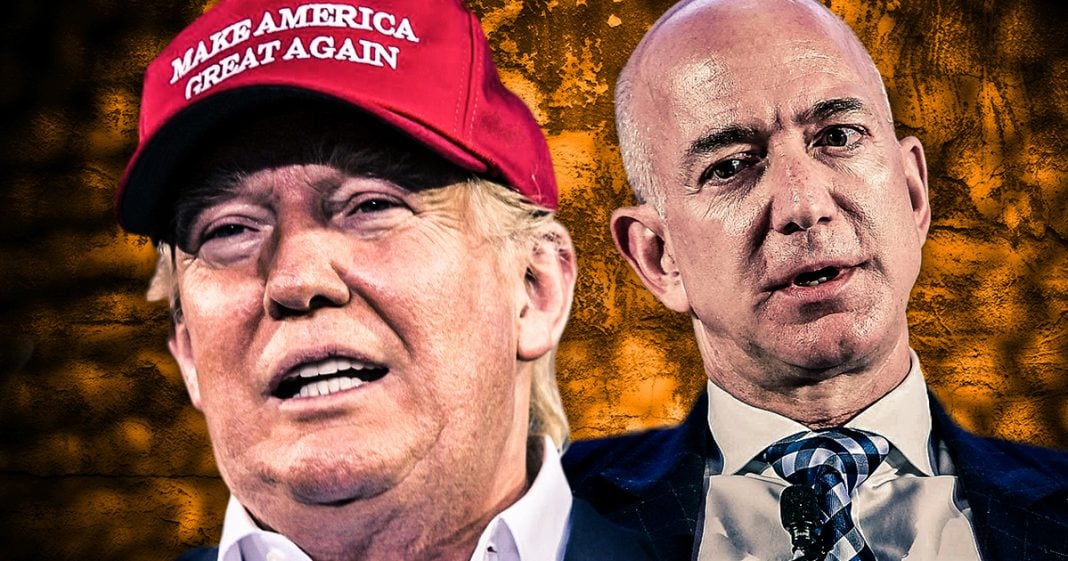 Executives on Wall Street are starting to have buyer’s remorse with the Republican Party, specifically President Trump, due to the fact that the President’s policies and his spineless followers in Congress are sending the stock market into a tail spin. As Trump escalates his war with Jeff Bezos and Amazon and his trade wars send tariffs soaring, Wall Street is losing value at a staggering pace. Ring of Fire’s Farron Cousins discusses this.

Executives on Wall Street are absolutely freaking out right now over Donald Trump’s policies, as well as the fact that Republicans in Congress are doing absolutely nothing to reign in the psychosis of Donald Trump. Here’s what’s happened just in the last week or so. The stock market is beginning to take a dive, a pretty big dive. I know that about half of people in this country have absolutely no money whatsoever in the stock market, so that hasn’t affected most of us in one way or another. It doesn’t matter. But those greedy little hedge fund managers and stock brokers and all those people who continuously fund the Republican Party and a lot of members of the Democratic Party, they’re freaking out right now because they’re losing a lot of money. Again, it all goes back to Donald Trump’s policies.

The second thing that’s actually causing the stock market to go pretty bad is the fact that Donald Trump won’t stop attacking Jeff Bezos and Amazon. The reason he’s attacking him, Bezos, is because he owns the Washington Post, and the Washington Post is usually not that nice to Donald Trump. That’s where that whole rift comes in, but it’s driving Amazon’s stock down. It’s driving other stocks down, so lots of very rich people are losing a lot of money.

I have no sympathy for Jeff Bezos. Let’s get that out of the way. I have no sympathy. The guy’s labor practices are borderline criminal and he should be investigated for that. But Donald Trump’s attacks on him, like he’s somehow ripping off the post office, that’s not based in reality whatsoever. He’s actually helping the post office make a lot of money, which is money that the Federal Government gets, so there’s nothing wrong with that. But the guy’s labor practices, the war mongering of the Washington Post, his defense contracts, yeah, he’s not a sympathetic character. He’s not somebody that we should feel sorry for in this situation at all. He’s just as corrupt as Donald Trump is.

But Wall Streeters, who are freaking out right now, absolutely deserve this. They put these people in power, and now they’re freaked out because they actually followed through on those horrible promises that they said they were going to do? Yeah, I’m sorry you have buyer’s remorse. I’m sorry you may not be able to buy that fifth or sixth mansion that you’ve had your eyes on, but you deserve this. You’ve been screwing over the American public for decades, and now you’re finally getting yours. That’s poetic justice. That is something that most of us in this country have been waiting to see for a very long time. I don’t care if you’re freaking out about what Donald Trump says or does or if he sends the stock market down to zero because you did this to yourself by funding politicians who promised you a big tax cut and once you got that, they also decided to do a bunch of other horrible things that help destroy the United States economy.

The middle class, the working class, the underclass, we’re going to be the ones who feel the effect of this far more than those wealthy hedge fund managers. We should be the ones freaking out right now, but we’re not. We’re going to work every day. We’re continuing our jobs. We’re manufacturing things in this country. We’re keeping things moving, all while those Wall Street executives sit in their offices, biting their fingernails, terrified at what horrible, stupid thing Trump is going to say today that’s going to send their net worth down by a few more million dollars.