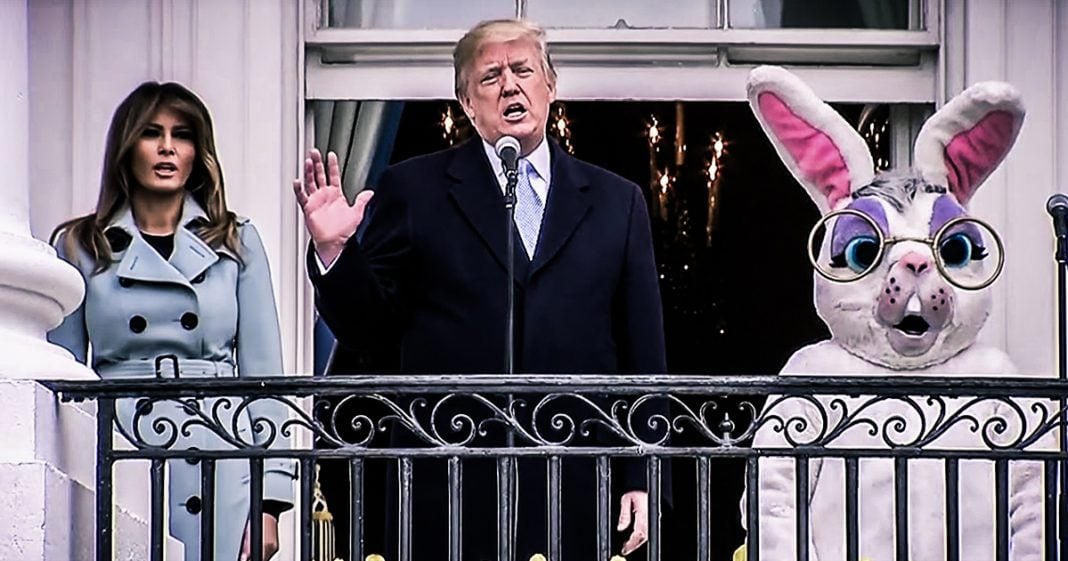 In a story that looks like it could have been plucked from the pages of The Onion, Donald Trump gave a speech about military strength to a group of children gathered at the White House on Monday for the annual Easter Egg Roll. Not only did the subject matter soar over the heads of the children, but the President’s decision to even bring it up before this crowd raises serious questions (again) about his mental health. Ring of Fire’s Farron Cousins discusses this.

On Monday, the White House held the annual Easter Egg Roll, and Donald Trump, as is customary for the president, gave a bit of a speech to the children present at this event. Yes, there were parents there, but the speech is always supposed to be directed at the children, and at first, it kind of seemed like that was the direction that Donald Trump was going, but then things got really, really bizarre. First of all, he didn’t know what to actually call the White House. Here’s what Donald Trump said. Here’s the exact quote: “This house, or building, or whatever you want to call it, because there is no name for it, it is special.” There is a name for it, and that name is the White House, and so yeah, I think it would qualify as a house. He then went on to talk about how well his aides and staff are keeping the building. He said they’re keeping it in tip-top shape. “We call it sometimes tippy-top shape, and it’s a great, great place.”

Now believe it or not, that’s not even the weirdest thing that happened during Donald Trump’s speech to these children, because after he talked about the White House or whatever you call that crazy thing that was behind him, after he talked about that being in tippy-top shape, he started to lecture these children about the strength of the United States military. He said, “Military spending is at a level it’s never been before. You see what’s happening with funding. Just think of 700 billion, because that’s what’s going into our military this year.” Do you think any of those children that were there to roll Easter eggs down a hill cared about that? Do you think they understood what the president was saying? This man has obviously crossed the boundaries from possibly having something wrong with his brain to he pretty much definitely has something wrong with his brain.

How does he not know what is appropriate to say to children, and not just in terms of whether or not they should be hearing about increased budgets and blah, blah, blah, but whether or not they can even understand it. Did any of those children there even know what a budget is? Do they even have the ability to comprehend how large of a number 700 billion is? Do they understand the implications that that $700 billion in funding for the military budget is going to result in countless deaths across the globe, because I don’t think that’s something that children are able to wrap their heads around yet. Donald Trump sounded like an unhinged lunatic in this little White House Easter speech that he gave on Monday, and I’m sure all of the children there, whether or not they understood what he was talking about, probably walked away thinking, “My God, I can’t wait till I’m old enough to vote.”