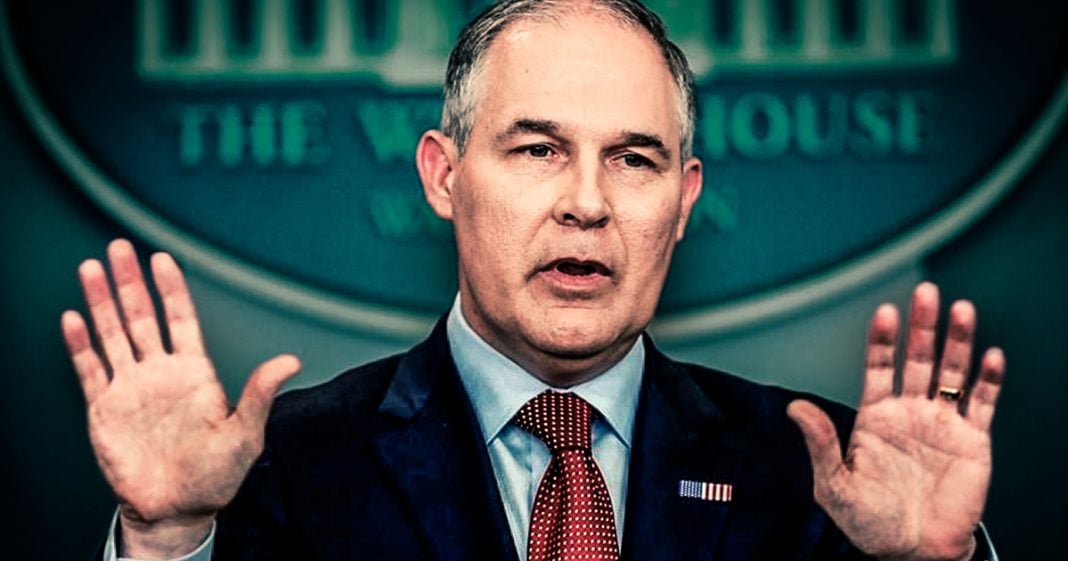 The Trump administration isn’t playing around anymore, and they want everyone to know that they absolutely don’t care about the environment. The EPA announced this week that they are going to eliminate fuel efficiency standards for automobiles, meaning that gas-guzzling cars and trucks will be headed back to the production line to emit more pollution and force consumers to use more gasoline. Ring of Fire’s Farron Cousins discusses this.

Scott Pruitt, the head of the Environmental Protection Agency has been in the news a lot in the last week, mostly due to the fact that he was paying $50 a day for a luxury condo that was owned by lobbyists whose businesses or whose clients, I should say, he helped out as head of the EPA. But there’s a lot more to the Scott Pruitt story and it has a lot more to do with just how corrupt and disgusting this guy is. We need to focus more on what he’s actually doing to the Environmental Protection Agency under Donald Trump’s rule and right now, this week, Scott Pruitt has proposed getting rid of fuel efficiency standards for automobile’s in the United States because he believes the Obama administration, when they enacted those rules, overstepped their authority and just went too darn far with it. Here’s what’s gonna happen if we repeal those fuel efficiency standards for newly manufactured automobiles.

First and foremost, it’s gonna benefit the oil companies because if auto makers start putting out cars that get worse and worse gas mileage, that means more trips to the pump, more money out of your pocket every time you need to fill up and more profits for the oil companies. It also means more pollution coming out of these vehicles every time you turn them on. Every time they drive down the road, that’s more pollution being emitted than was under the old rules. But that’s what Scott Pruitt wants, protect the oil companies and destroy the environment at any cost. I mean, I honestly feel at this point that the entire Trump administration is not just trying to repeal rules to make businesses better. I feel like they actively want to destroy the planet, like it’s their goal to make sure that our air is dirtier and our water is more poisoned and more toxic and that we kill as many species alive as we possibly can. I mean, Donald Trump’s big game hunting commission that he recently put together is proof of the fact that they want to kill as many things as they possibly can.

This is absolutely disgusting. So whatever you think about all these scandals surrounding Scott Pruitt and his condo and his luxury travel and his soundproof booth in his office, yeah. Those are really bad. But if he gets removed from office, which honestly could happen before the end of this video, they’re gonna replace him with somebody who’s gonna do the same crap. Getting rid of Scott Pruitt is not gonna undo the damage that he’s causing to that agency. So at this point, I don’t know that it really matters. Yeah, maybe we’ll get somebody who’s not gonna waste tax dollars or be as overtly corrupt at Scott Pruitt. But we’re damn sure gonna get somebody that doesn’t care about the environment and wants to continue turning the EPA from the environmental protection agency to the environmental polluting agency.