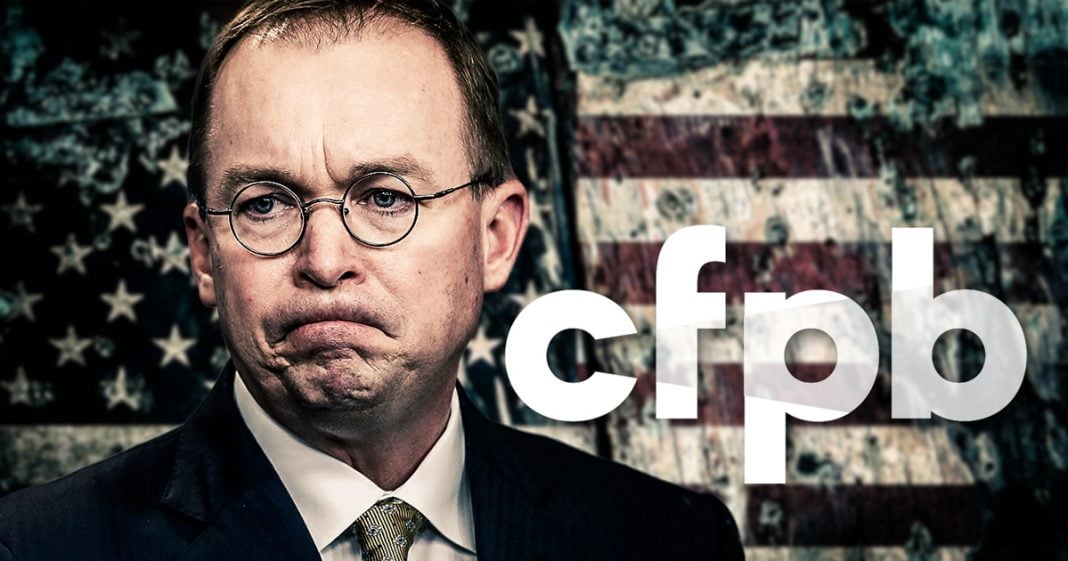 Mick Mulvaney has asked Congress for their help in dismantling the agency that he was recently put in charge of. In his first official report to Congress, Mulvaney asked legislators to take away some of the power of his agency because he believes that it has too much authority over criminal bankers in the United States. Ring of Fire’s Farron Cousins explains Mulvaney’s motivations.

Mick Mulvaney, the head of the Consumer Financial Protection Bureau, just released his first report to Congress about his agency’s activities. And in that report, he is asking members of Congress to help him destroy this organization that he only recently became the head of. His report says that his agency just has too much power and too little oversight, and they can just do too many horrible things to those nice guys up on Wall Street and the nice guys sitting in those big banks, so they’ve got to take all that power away from him because God knows what’s going to happen if we actually have a bureau in the federal government who is in charge of investigating financial crimes from the big banks and from Wall Streeters. That’s what Mick Mulvaney wants, and he’s asking Congress to help him do it.

And I guarantee you, given the ties that members of Congress from both Republicans and some Democrats have to Wall Street banks and hedge fund managers and all of that, I guarantee you they’re going to do it. They’re going to go along with Mulvaney’s brain dead plan here because they don’t care about consumers in the United States. And if you think, well no, maybe they do, listen. This organization that Mulvaney is running is called the Consumer Financial Protection Bureau. Right there in the name it tells you what it does. It protects consumers from financial fraud from banks and Wall Streeters and hedge funds and payday lenders and all of that. And Mulvaney wants to take that power away from his agency because it’s just too much for him.

Now this is the same guy who’s already ended several lawsuits against payday lending companies for their predatory lending practices that put people in an endless cycle of debt and repayment, most of whom are never able to fully pay off those quick little payday loans that they go and get. But again, this always goes deeper. This is not about Mulvaney actually thinking this agency has too much power. Mulvaney understands that, like most member of the Trump administration, he’s got what? Maybe a year, year and a half before he gets fired, or resigns, or gets indicted. I don’t know. So he has to demolish that organization as quickly as possible in order to protect the big banks. So that way, if we ever get somebody in charge of the agency that actually cares about protecting consumers from financial fraud, they won’t have the tools necessary to prosecute any of these bankers that continuously, repeatedly, pull the same crime on the American public and never go to jail.

Mulvaney wants to make sure that remains the status quo. He doesn’t want things to change, other than, he wants his agency to be crippled, so that way he won’t even be responsible for prosecuting any of these banks when they continue to pull off these massive multimillion and multi billion dollar scams against American consumers. We’ll have no recourse when they do this, and Mulvaney can sit back and say, “Well, that’s not our job anymore because, like a good little Republican, I destroyed the agency that I was supposed to be working for.”