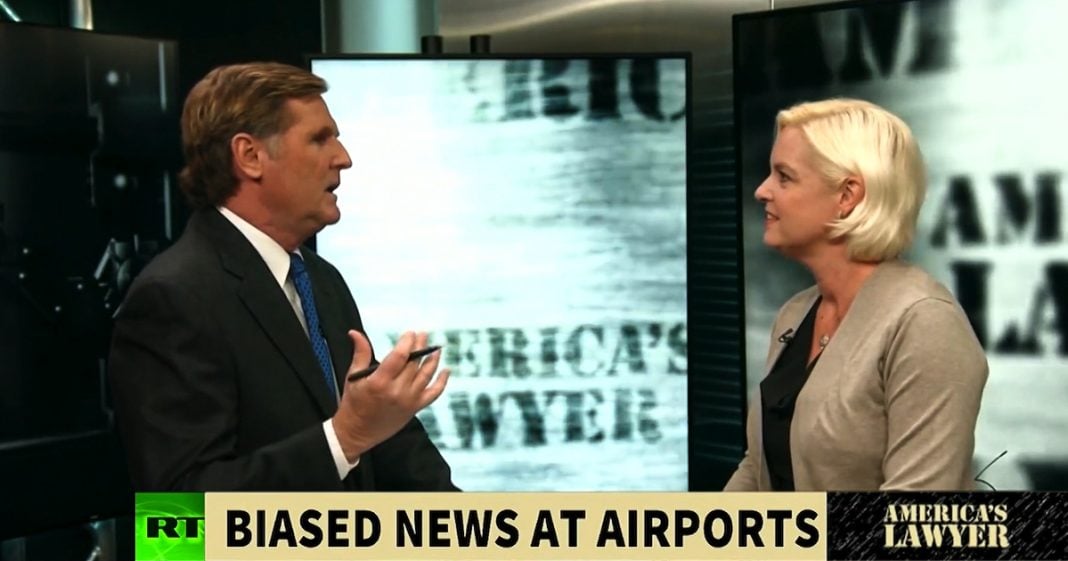 Via America’s Lawyer: Mike Papantonio is joined by Mollye Barrows to talk about criticisms airports are getting for playing CNN exclusively on their television screens.

Mike Papantonio: Airports are facing criticism for only broadcasting CNN News in their facilities. Critics say the exclusive broadcasting of CNN exposes travelers only to left leaning partisan views. The federal government plays a big role in financing the growth and development of airports, so does that mean the taxpayers would have a choice of what news they see on the airport television screen? Joining me to talk about this is Mollye Barrows, legal journalist for the Trial Lawyer Magazine. The truth is the best argument, whether it’s left leaning, take left or right out of it. You have people walking through airports, you feel like my tax money pays some of the functions of this airport. I don’t want to be in here blasted with left wing, right wing. I simply want to enjoy myself. I want to be entertained. Life is hard already. My flight didn’t make it.

Mike Papantonio: I’m 24 hours away from home. You can understand kind of the reaction. I’ve seen CNN in those airports sometimes and you go, “My god, just give me a break. Just lighten up.”

Mike Papantonio: What’s the solution? What’s your take on this?

Mollye Barrows: Well, a couple of things that jumped out me. First of all, I didn’t realize that CNN Airport News is what they call it, CNN Airport had an exclusive contract with so many of these airports. But it’s a business model I guess they pitched in 1992 and they went with them and they said, “We will pay you X amount of dollars over an eight year period of time, or however much it is, and we’ll adjust annually accordingly according to how much is fair to pay airports. So we’re going to pay you to run our news product.” And up until recent years, it’s gone relatively unnoticed. Either airports signed along because they didn’t have any other options or they went along with it because CNN made it easy for them and paid the most money to run their content.

It’s a business model that’s been working for them, but I think it may eventually be phased out to a certain extent. I can see why some viewers would want to have a choice. If you’re stuck there in the airport, whether it’s a layover or a flight or you’re a business person or personal travel, you want the option to change. I guess you have the freedom to go and ask if you are to change it.

Mike Papantonio: So here’s the point. What are you going to put on? You got MSNBC, that’s going to be left leaning.

Mike Papantonio: Fox is going to be right leaning. Is it the solution that I think California, San Francisco, I think-

Mike Papantonio: They have probably the better solution which is to upgrade the wifi process and make it more accessible to people who just want to watch the stuff they want to watch. What’s your take?

Mollye Barrows: Yeah. I think you’re exactly right. I mean, and really that goes to the bigger issue of what you’re talking about anyway. Which is information and who has the right to see what and when and how that viewpoint is presented and dispersed, if you will. Whether it’s airports or government offices, there’s no more neutral ground for information it seems.

Mike Papantonio: So they took CNN down because of … Mollye, thanks for joining me, okay?