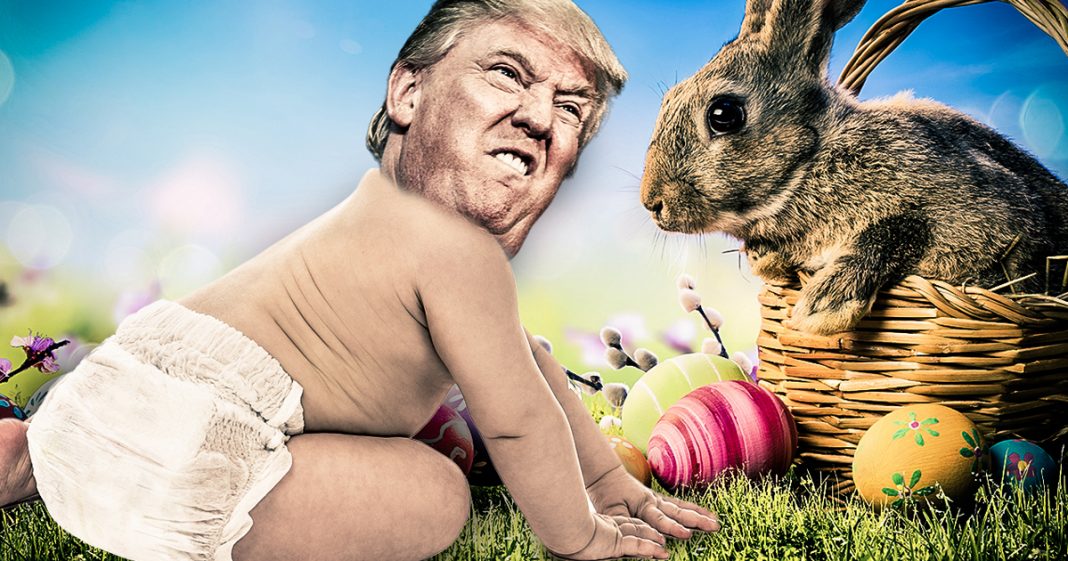 As Americans were waking up to Easter morning and children were checking their baskets for candies, Donald Trump was on Twitter going after immigrants in the United States. He blamed Democrats for failures on DACA, even though he personally ended the program, and he said that our country is “being stolen” by illegal immigrants (a comment made while standing next to his immigrant wife.) Ring of Fire’s Farron Cousins explains Trump’s motivation for this tirade.

Donald Trump is incapable of going a single day without acting like a complete and total jackass. On Easter morning, Donald Trump woke up and instead of sending out a tweet of good cheer and happiness and Happy Easter and spring rebirth and all of that, he got on Twitter and started attacking immigrants and Mexicans and Democrats. That is how Donald Trump spent his Easter morning. Rather than doing what past Presidents have done and tried to put aside partisan politics and hateful attacks for a single day, Donald Trump woke up, possibly pissed off because the Easter bunny didn’t visit him, I don’t know, and went after immigrants in this country and immigrants who would like to come into this country.

Yeah. They’re not. They’re really, really not because they don’t need to. It doesn’t affect them. It’s really not even affecting us that much, and if we kick all of them out, that’s really going to hurt us. The economy is going to suffer a massive, almost instantaneous collapse if we get rid of all the immigrants. Don’t believe me? Take a look at what happened in Georgia a few years ago when they immediately got rid of Visa program that allowed a bunch of immigrant farm workers to come in for a season. You had entire cities where crops were sitting in the field rotting because American citizens wouldn’t take those jobs.

They either physically couldn’t do it, or they simply didn’t want to. Massive crop losses, massive economic losses and that’s what’s going to happen all over this country if Donald Trump has his way and starts rounding up immigrants by the truckload and shipping them back to Mexico. It’s going to destroy our economy.

But let’s move away from the financial issue for a second, because that’s always secondary. Let’s also look at the fact that Donald Trump is tearing families apart. He’s shipping veterans who fought for the United States out of this country because they’re immigrants. Illegal immigrants, according to Trump. Their Visa expired, they gotta get the hell out of here. We were more than wiling to take them when they wanted to stand up and got strap on body armor and go face Al Qaeda in the Middle East. But now that that’s done, yeah, you can get the hell out of here, we don’t care about you.

That is incredibly unethical and dehumanizing for these people. And that’s the way Trump looks at them. That’s basically what he was talking about on Easter morning. “They’re not humans, they’re immigrants. We shouldn’t care about them, we should get them the hell out of here. Now if you’ll excuse me, I gotta go walk into this church with my immigrant wife. Who happens to be my third wife, but I’m gonna go and sit for an hour and a half and pretend to be a decent Christian.”

The media’s gotta do a better job of calling this asshole out on this stuff. This is getting disgusting. He’s lying about DACA, saying the Democrats won’t come up with a deal, even though he’s the one who ended the program. The Democrats have to accept a little bit of responsibility for this because they believed Mitch McConnell and Paul Ryan when they capitulated on this issue to keep the government running and Republicans said, “No, no, no, we’re super serious. We’ll come up with a deal in like two weeks,” and then it never happened.

That’s the Democrat’s fault for being just stupid on that, knowing damn well you can’t ever trust a Republican. But Trump is the main problem here. He hates, and I mean absolutely hates, immigrants. And for a person who has all of his personal goods made overseas, that is a little ironic. ‘Cause if it weren’t for non-American people, Donald Trump’s own product lines wouldn’t even be manufactured anywhere. But he doesn’t want them here. Keep them over in Mexico, let them make the stuff there. Keep ’em in China, let ’em make it over there and then we’ll send it back and sell it without ever having to look at their faces.

That’s Donald Trump’s immigration policy. It’s fine for them to do the work, they just can’t do it over here.