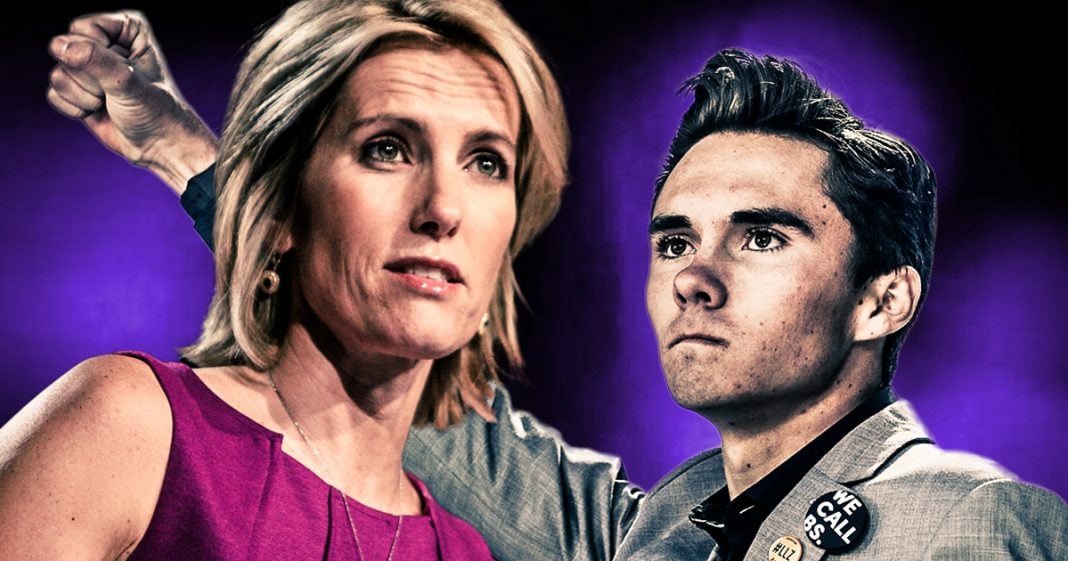 Fox News host Laura Ingraham went on a sudden vacation this week after her show began hemorrhaging advertisers in the wake of her attack on David Hogg. Ingraham had apologized after attacking Hogg, but that didn’t do anything to stop the advertiser exodus. Fox claims that this vacation was pre-planned, but as Ring of Fire’s Farron Cousins explains, we’ve heard that line plenty of times before.

Last week after attacking teenager David Hogg on Twitter for allegedly not getting into several prestigious colleges and universities that he’d applied for, Fox host Laura Ingraham has suddenly taken a preplanned vacation according to executives at Fox News. Now what happened is that after Laura Ingraham attacked a teenager and went after his grades, went after his character. The teenager, David Hogg, responded by calling for an advertiser boycott of Laura Ingram because she’s such a disgusting human being. And she’s picking and bullying on children. And the advertisers followed David rather than Laura.

Laura Ingraham may very well come back. And I think she will. But, these advertisers have to understand it’s not just Laura, just like it wasn’t just Eric. Just like it wasn’t just Bill O’Reilly. It’s the entire network. I mean, how many more people on that network do we have to call for advertising boycotts of before these advertisers realize that, holy crap. No, it’s also Sean Hannity. It’s also Tucker Carlson. It’s also Fox and Friends. The entire network’s job is to spew hate, misinformation and division amongst American citizens. That’s what they exist to do.

So if you continue advertising on any Fox News program, please understand there will, given the history, be a time when you have to pull your advertisements off of another show. And then another one. It may happen in one month. It may happen in one year. It could happen tomorrow. But as long as you continue advertising on that network, you’re gonna have to continue pulling advertising from specific shows. So my advice, from a purely financial and, you know, public perception standpoint is to pull all your advertisements from the network. It’s going to happen again because that’s what they do. So the longer you stay there, the more you support people like Sean Hannity or Tucker Carlson or Laura Ingraham, if she comes back, the more likely you are to face massive public backlash when one of those people decides to go after a child or a public figure in a way that is demeaning and unethical and potentially illegal. That’s what’s going to happen again.

David Hogg may have been the one to really kickstart this advertising boycott of Laura Ingraham, but had he not I’m still confidant somebody else would of had the good sense to do this. I’m proud of him for doing it and taking the charge on it as he has on other issues as we’ve seen from the last few weeks. But it doesn’t end with Laura Ingraham. If these advertisers really wanna make a point, if they really wanna get the network to shape up, they need to pull their ads off of every single program that that network has to offer. Because if they don’t do it willingly now, the public’s gonna force them to do it later.