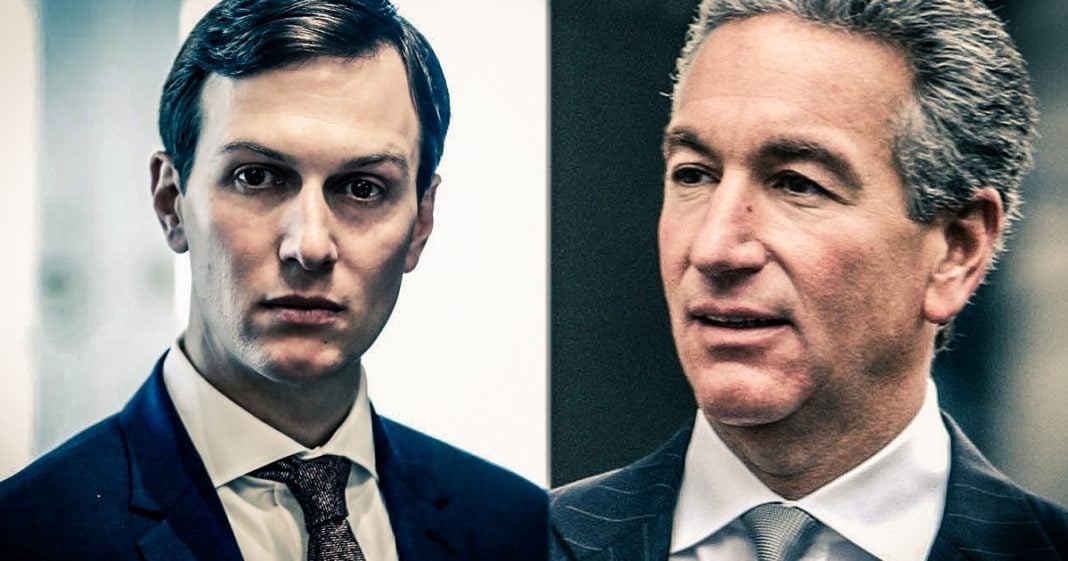 Jared Kushner’s political ties and his seemingly never-ending corruption are helping to destroy his family’s fortune. New reports say that Jared’s father is now struggling to find investors for his business an property holdings, and that he could be facing financial ruin by the end of this year. Ring of Fire’s Farron Cousins discusses this.

Charles Kushner, the father of Jared Kushner, who is the son-in-law of the President of the United States, could be headed for financial ruin, according to a recent report, as early as the end of this year. Here’s what’s happening to Charles Kushner and his multi-billion dollar real estate empire in the state of New York.

You see, Kushner is in debt, I think by about $1.2 billion. He asked to get investors and other kind of financiers to step in and help him with the properties and projects that he wants to do. It’s a typical thing that happens in real estate. You’re in debt until you sell a bunch of properties, then you get all your money back and then some.

I have absolutely no sympathy whatsoever for Charles Kushner. This is not, surprisingly, Jared Kushner’s fault. Well, I guess, to an extent, it is, because Jared Kushner being thrust into the national spotlight has allowed that national spotlight to also shine on all of the horrible things that his family business has done. That’s the problem here.

It’s not that Jared necessarily went and did all these horrible things that the company’s been accused of. He was involved in some of them according to investigations, but it’s the fact that people are now paying attention and they understand what kind of shady shoddy business Charles Kushner and Jared Kushner have been running for years. That’s the problem that Charles Kushner is facing right now.

And I’m sure it doesn’t help that his own son is being investigated for four different things by four different organizations but sooner or later, all of this would’ve come out eventually. There’s only so many times that any kind of big major business or company can continuously, allegedly, I have to throw in there, break the law without somebody stepping in and saying, “Hold up. We’ve got to take a look at this,” and that’s exactly what happened recently with the New York Department of Buildings, that’s now investigating Kushner and the family business because they lied repeatedly on at least 80 different official state forms.

So yeah, Charles Kushner probably isn’t too happy with Jared right now. But at the same time, he needs to understand that he is also a part of this. This isn’t just because of Kushner, it’s not because of the fact that Jared is the son-in-law of the most hated President in modern American history. It’s due to the fact that they’re unethical businessmen and that seems to be a common theme among some of the people who are high profile Republicans in the Republican party.

That’s what we’ve come to expect. I would expect no less from Jared Kushner’s father. After all, where do you think this kid learned how to do all the shady things he’s been accused of doing? He didn’t read a book about it. Probably learned it by watching Daddy, which according to reports, is what Jared Kushner, who is 36, 37 years old still calls his father.

I’m curious as to see what kind of influence Jared Kushner will still have within the White House if his family ends up going bankrupt and Jared Kushner is suddenly worth $0. I’m sure in the eyes of Donald Trump, possibly even Ivanka, that’s going to make him not just financially worthless, but also worthless as a human being. That’s going to be interesting to see how that plays out.