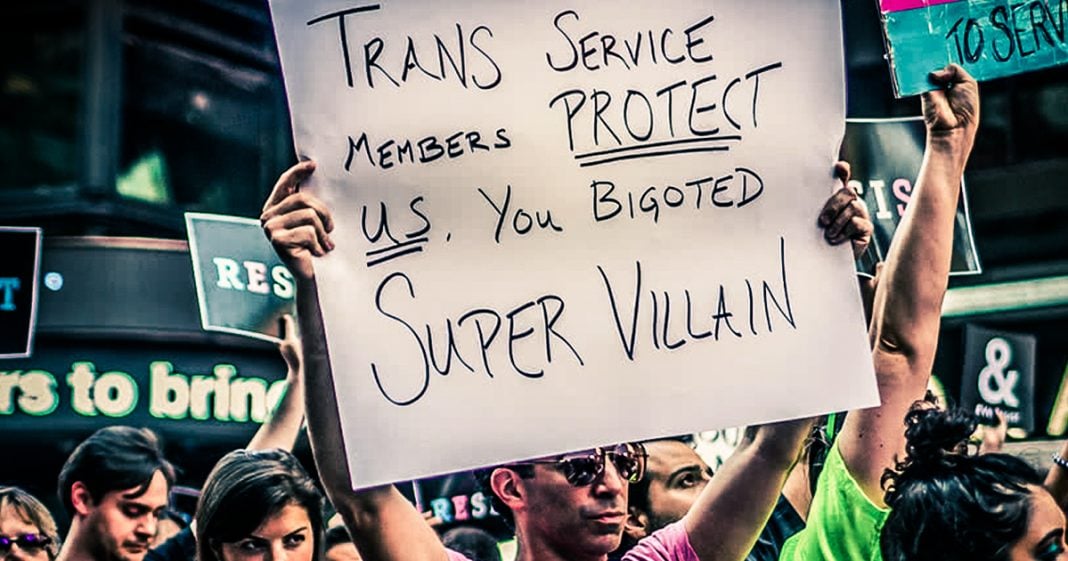 Donald Trump has spent more of our tax dollars golfing and going to Mar-a-Lago in the last year than the US military spent on care for transgendered troops, yet that hasn’t stopped the President from attempting to institute a ban on transgendered soldiers citing the “high cost of care.” It isn’t about cost, it is about bigotry, as Ring of Fire’s Farron Cousins explains.

Donald Trump recently announced that he wanted to once again attempt to ban transgender troops from serving in the United States military. The biggest reason that health says, is because the cost of care for transgender troops is just too much. It’s too much for the American payers to have to foot that bill, and it’s not fair that they have to foot that bill, so let’s just ban them from serving in the military.

Well here’s the thing, according to recent data, Donald Trump’s golf trips and his constant trips to Mar A Lago actually have cost tax payers more money in the last year than did transgendered troops. So Donald Trump’s constant refusal to actually work is what’s costing us a ton of money, millions upon millions of dollars, not caring for transgender troops.

So that money argument that the president is attempting to make immediately goes out the window, and that’s where it should be. Because this was never about money, this is about bigotry. This is about Republicans, specifically Donald Trump who wants this ban, and Mike Pence who actually drafted it. This is about them not being happy with somebody’s life choices, about them thinking that it’s gross, or weird, or, “We don’t like it, so we’re going to ban you.”

That’s what this administration thinks. That’s what most Republicans think. We have a real problem with the United States military right now, and it’s been going on since the Bush administration. Back then they were getting too few people signing up to enlist in the military, so they actually had to lower the standards of who could be accepted. They lowered it to the point where they were now allowing people with histories of gang violence or ties to White supremacist groups to get a pass and be allowed to go into the military.

Prior to that, if you had one of those marks on your record, you couldn’t get into the military. But we were so low on troops because of Bush’ war on terror, that we had to lower those standards and we let in the worst of the worst. Gave them training, gave them guns, and we’ve since what’s happened with some of the civilian casualties over in Iraq and Afghanistan and other parts in the Middle East. Soldiers throwing puppies off a cliff. That’s what happens.

Here, we have people who happen to be transgendered, but who willfully signed up and said, “Yeah, I’m willing to go die for my country. I’m not in a gang. I’m not a supremacist. I just want to go help and serve. This has nothing to do with my gender identity. It has nothing to do with sexuality. It just has to do with me wanting to be a patriot.” But for people like Pence and Trump that’s not okay. So let’s let in the gang members, let’s let in the White supremacists, but if you happen to identify as a different gender, well that’s just crossing a line for these guys.