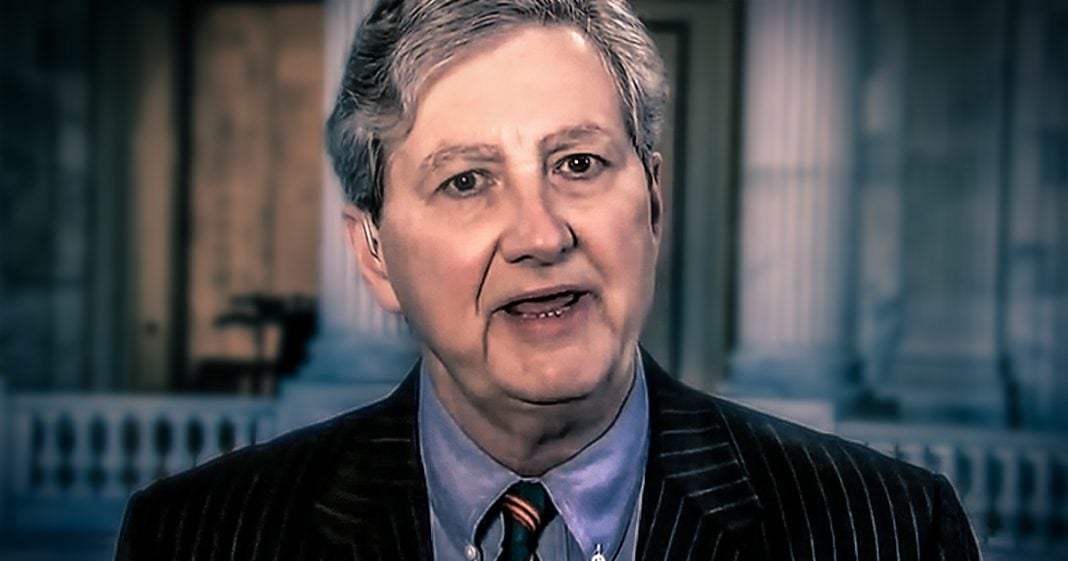 Republican Senator John Kennedy is furious that people inside the White House would have the audacity to leak information about how incompetent our president is, and he stated during an interview with CBS that the people leaking this information “have no soul.” Kennedy isn’t the first Senator to lash out at the leakers instead of the President, and Ring of Fire’s Farron Cousins has a theory as to why these Republican lawmakers are so upset.

John Kennedy:
[inaudible 00:00:22] with us, we can do something that’ll improve Facebook.

Gayle King:
Can I ask you, Senator, about another story that’s been in the news? The possible leaks at the White House, that President Trump was allegedly told in capital letters do not call Vladimir Putin to congratulate him on his victory, that apparently has been leaked from the White House. What do you make of what’s going on over there, and are you concerned about it?

John Kennedy:
Yeah, I’m concerned. The president ought to be concerned. Mr. Kelley, we all ought to be concerned. It’s unconscionable. You know, if you dislike the president that much and you’re still working for him, you know, you don’t have a soul. You ought to quit. I mean, there can’t be more than a handful of people who had access to this information. I’m not saying the American people don’t have a right to know, they do. I am also saying that a president, whoever the president is, has a right to surround himself with people who at least have a modicum of loyalty and sort of have his best interest and the best interest of the American people at heart, at a minimum. I think this leak [inaudible 00:01:32] unconscionable. They need to prosecute whoever did it. They need to dig a big old hole underneath the jail and put the person there, because it’s wrong.

Gayle King:
Do [inaudible 00:01:41] on the leak and also on the action of congratulating Vladimir Putin. Senator Kennedy, thank you so much for joining us.

That’s right, White House leakers, you have no soul. You have no redeeming qualities whatsoever. They should build a jail, then dig a hole under the jail and bury you in that hole underneath the jail, according to Republican Senator John Kennedy. Of course, as he says, the public has a right to know these things. I guess it’s okay that you leaked it, but you should still burn in hellfire for all eternity for doing that, even though you did the right thing.

You see how none of that makes any sense at all? Yet, that is clearly what John Kennedy just said in that clip. Yeah, you have no soul. You should be buried under a jail, but yeah, the people totally had a right to know everything that was going on with this administration. How do you have it both ways? How are these the most evil people in the world, and yet at the same time, American heroes for telling us the truth? It doesn’t work that way.

Here’s the reason why people like John Kennedy and Marco Rubio earlier this week are going after the leakers, because they understand what kind of damage that’s going to cause them personally in their next elections. You see, whenever somebody leaks something from the White House talking about dysfunction or talking about the president not listening, it’s all bad for Republicans. Not just the president, but anybody else who’s running for office who calls themselves a Republican. Somebody who has the authority or ability to speak out against the president, yet refuses to do it. That’s why they’re going after the leakers. Not because it’s making Donald Trump look bad, but because it’s making the entire Republican party look bad.

Yeah, I understand at this point why John Kennedy thinks these people have no soul. They could be destroying his political future because he’s too weak and spineless to stand up to a guy like Donald Trump who won’t listen to people who are smarter than him. We’re going to see a lot more of these Republicans demonizing the leakers. Just remember, they’re not mad at what the leakers are doing to Trump. They’re mad at what the leakers are doing to the entire Republican party.