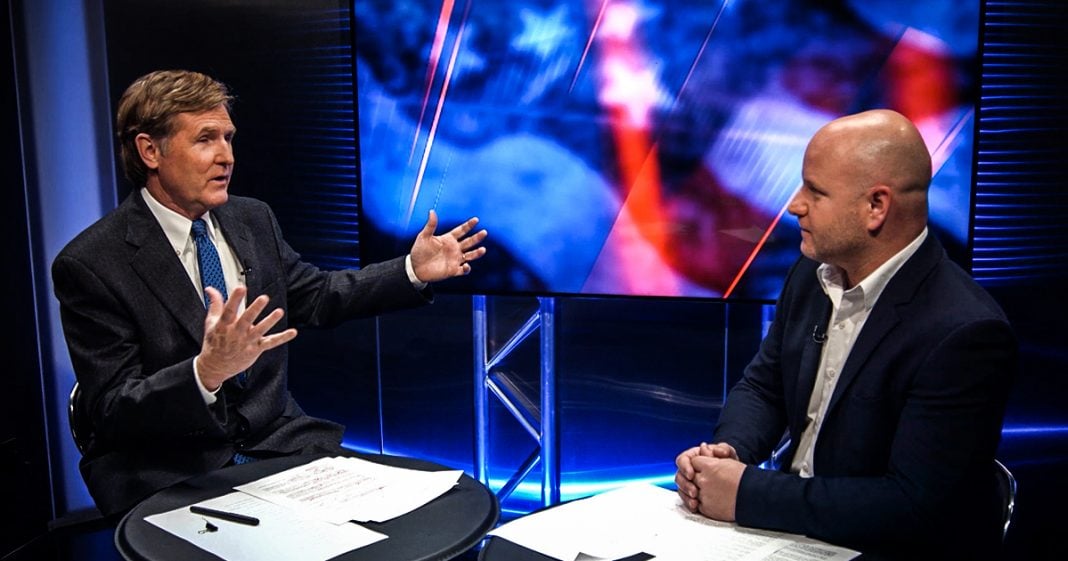 The news keeps getting worse for Facebook – A new report this week says that the social media company has been collecting phone call and text message logs from users, but the company insists that they only did it with the users’ permission. Ring of Fire’s Mike Papantonio and Farron Cousins discuss this.

Mike Papantonio: The news keeps getting worse for Facebook. A new report this week says that the social media company has been collecting phone calls and text messages from users. But the company insists that they only did it with the user in mind. They only did with their permission and they were just trying to look out for the user. What this story … Every day this story … Zuckerburg looks like a more and more, like he’s at the center of this entire thing, doesn’t he?

Farron Cousins: And he really is. He absolutely is. He declined earlier this week to meet with UK lawmakers to discuss all of the wrongdoing that this company has done. And this particular story, this really crosses a line here. You know, at first it was, oh, data got accidentally leaked. Or we worked with a company that was using it for micro-targeting, which isn’t 100% illegal. But this one, scraping the phones.

Farron Cousins: Yeah, and what they’ve done is, you know, Facebook will partner with these app sites or in their own app with, for example in this particular story, Android users, to where once they download the app. Once it’s on that phone, that new little app starts taking every piece of data from every-

Farron Cousins: So it starts grabbing your-

Mike Papantonio: Okay, but here’s the other thing that they’re looking at that’s even more chilling. Once they grab the data from that user, the Android data, whatever it may be that’s been downloaded there. The question then becomes once they have the contact for that third person, are they then able to get into that third person’s information and it just geometrically grow. That’s really where this problem may end up heading.

So what’s the quick answer here? I mean, you know, you’ve got the shares dropped 14% last year. He’s coming out with his great apology. Gee whiz. You know what it is. He’s trying to make it sound like, gee, I have a big company here. Okay, I have a big company. I can’t really keep up with what’s going on. That’s nonsense, isn’t it?

Farron Cousins: Oh, it absolutely is. You know, especially when we’re talking about this particular instance of the data scraping from all of these devices. They knew what they were doing. They built it into the system, into the apps, and when he comes out and says users gave us permission to do that. It’s not exactly truthful. Because, yes they gave permission for Facebook to access their phone for things like messenger to try to find other people you may know on Facebook. At no point in that contract that users, you know, you just click yes, I agree. I accept, move on. Did they say, “You can have access to my phone calls. You can have access to my text messages.”

Farron Cousins: Exactly. So, no, they didn’t give permission expressly for this and Zuckerburg is sitting here trying to tell us, “Well, we had permission.” No, you didn’t. You had permission-

Mike Papantonio: Well, what had-

Farron Cousins: … No you didn’t. You had permission to find a contact.

Mike Papantonio: Yeah, okay, we’re talking about phone numbers, the length of the call. What was the communication, whatever. So then, now … Watch this. I call … They get your information from something I posted. Now, you have nothing to do it. You’re a third party out there. You have nothing to do with anything. What if, I’m just saying, what if we see now that you now become a target because of your association with me. You see that’s the real problem.

Farron Cousins: Well, here is another problem too. We already know with the Cambridge Anylitica thing that they were given the data to political campaigns.

Mike Papantonio: Both sides, by the way.

Farron Cousins: Right, right. But this isn’t … That’s not the end of it. That is not the end of it at all. Why does a company like Facebook need your private data? Who all are they selling it too and that is what we need to find out now, because there is no way that this was just for a one time, one campaign thing. They have got to be selling this data.

Mike Papantonio: This is all about … Look, it’s all about money. People always ask, “Gee, I wonder how Facebook makes money? Do they stay alive just by ad” No, they get this information and they sell it to everybody. That’s why you turn on your tel … That’s why you turn on your computer and if you talked about wanting to buy a new set of … a new pair of Levis yesterday, all of a sudden it’s on your computer today. Hey, there’s a sale on Levi’s at such and such a place.

Farron Cousins: Well here’s another thing, too that’s actually developing the Facebook story is that we’re now finding that Palintir, the kind of private spy organization or whatever you wanna call it.

Mike Papantonio: Yeah, they are.

Mike Papantonio: Well that was years ago.

Farron Cousins: Yeah, that was a 2010,2011. So, now that they’re slightly in bed with Facebook and they’ve got all this private data, we’re gonna find it … Yeah, I firmly believe that there is gonna be even more targeting.

Mike Papantonio: Well, the reason I say that, that Palintir is years ago is because Facebook was on notice of who these people are.

Mike Papantonio: Okay, Facebook knew, understand, that these grubby little freaks with the Chamber of Commerce were spying on people who came out critical of Chamber of Commerce. So, people at Zuckerbug’s, “Oh yeah, these are the people we wanna do business with.” It’s the old thing, you lay down with dogs and you’re gonna get fleas. That’s what’s happened here. I don’t think there’s an easy solution for the guy outta here. It could be. It’s not gonna crash Facebook. Facebook has almost become a generational thing anyway. Isn’t it … I mean, we don’t have … You don’t have most millennials really going to Facebook. You have baby boomers that are still on the Facebook nature. But this, I don’t know. This is more than a blip in the road, I think.

Farron Cousins: Oh, absolutely and I think Zuckerburg, his problem is, you know, he’s doctor Frankenstein. He created this thing. It got so big that he couldn’t control it and starts making these deals and now it’s out of his control. The monster is out.

Mike Papantonio: Yeah, and he was so greedy, rather than just selling it and moving on, he has to hang on to it because he wants to squeeze every dime out of it. Well, these are some dimes that might cause him some problems.