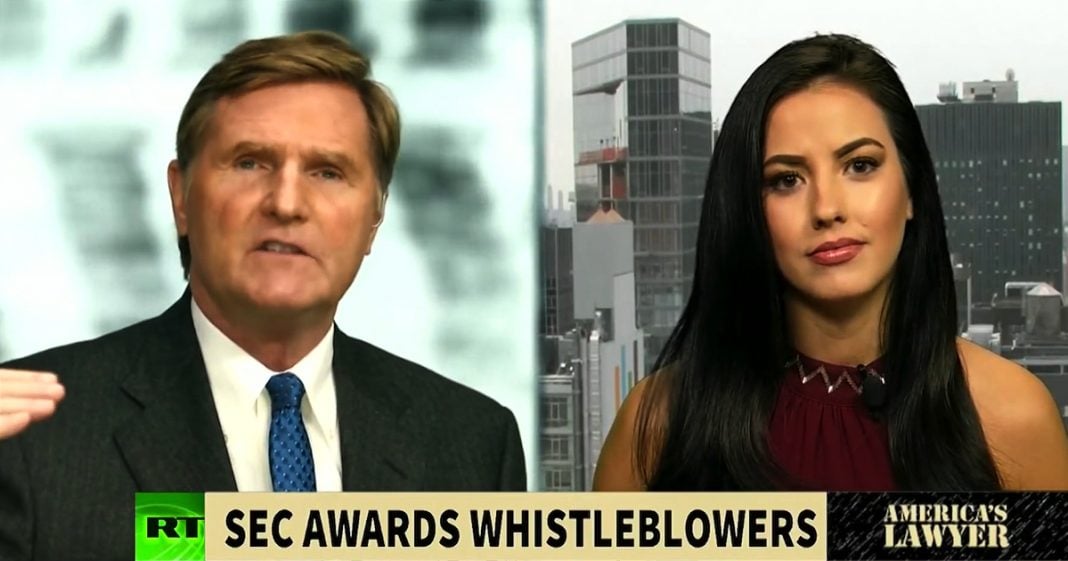 Via America’s Lawyer: Mike Papantonio talks with Trinity Chavez about why former Bank of America representatives are being awarded $83 million by the SEC.

Mike Papantonio: Three former Bank of America executives have been awarded 83 million dollars by the SEC for exposing fraud within the bank. As a result, the Bank of America is ordered to pay 430 million dollars to the government. While that may seem like a heavy penalty, it’s not. The fact that Bank of America made 17 billion dollars in profits that same year, and it has some people wondering if Bank of America’s financial penalty was really just a payment to stay out of jail. Joining me to talk about this is RT correspondent, Trinity Chavez. Trinity, are these whistleblower cases against Wall Street really affecting any kind of meaningful change when all they have to do is pay money? What’s your take on that?

Trinity Chavez: Well, people are realizing the potential benefits of reporting wrongdoing in the Security Exchange Commission, and the CFTC, which is the Commodity Futures Tradings Commission’s whistleblower program, it’s sort of been a quiet sister of the SEC; but it’s crucial that the exchange commission maintains confidence in the US stock market. This is absolutely critical to having a strong functioning US economy. If there is doubt that there is transparency, that there’s not transparency into the workings of the US companies, and if there’s uncertainty that investors are actually getting accurate information about corporate profitability, the stock market would be vulnerable to sit in shifts as hidden information comes out.

The Security Exchange Commission increases transparency and the trust in the stock market, and that’s why it’s the most sophisticated and popular stock market in the world. The transparency attracts much more business to US financial institutions, and it makes it easier for companies to offer initial public offering.

Mike Papantonio: Trinity, at this point, we know that we really can’t believe even what we read in the financial data. We saw it in 2008, what was it? 24 hours before Shearson Lehman went out of business. They were telling their brokers in the field, ‘Hey, continue selling this.’ The brokers couldn’t even find out what the truth was.

We have this naïve notion that everything’s going to be okay at the highest level, that people really aren’t going to lie to us at the highest level. So we saw 2008 was an example of we just can’t take that attitude anymore, because they lie at the very highest level. Shearson Lehman is the greatest example I can give you. Everybody at the very top kept all of their money, and everyone at the bottom to middle level lost all their money because of the big lie.

It’s a system that’s already corrupt. I’m wondering why is the SEC offering such an amount of money to Wall Street whistle blowers when no doubt they were part of it in the long run. Is it really the best way to go about shining the light on corruption? Or, isn’t it best just to throw some of these thugs in prison? What’s your take?

Trinity Chavez: Well, this is a way for Securities and Exchange Commission to regulate the stock market and to protect investors. To do this, they have to incentivize whistle blowers to expose security fraud by offering what they call a ‘bounty’ worth between 10 and 30%. I mean could you imagine if you got 10% for blowing the whistle on Madoff’s 50 billion dollar Ponzi scheme? The payoff for that would be huge.

As you can imagine, monetary incentives, especially of this magnitude when you’re dealing with millions and billions of dollars, it can encourage unreliable tips. According to the Security Exchange, since the implementing the bounty program, they have seen more than 14,000 tips. Last year alone, the Commission received over 4200. This surge could represent an increase of awareness of the whistleblower program and the growing acceptance of the role. But, while the number of whistle blowing reports continue to rise, the quality of the tips still have to be assessed to see if they will ultimately detect fraud; which requires time.

Mike Papantonio: I’m very familiar with whistleblower cases. We handle them all over the country. Anybody that is actually familiar with this process will tell you there’s two steps that have to take place. First of all as the whistleblower case, you have to expose the fraud; but then the most important thing is not just getting the money collected, it is throwing people in prison who participate. That was the whole purpose of whistle blowing to begin with.

It’s where Abraham Lincoln came up with these laws that said during the Civil War, you had profiteers that were selling absolute garbage to soldiers. I mean guns that wouldn’t shoot, shoes that would fall apart after the 24 hours. He didn’t just take money from the corporations doing that. He was throwing people in jail. That was the whole purpose of whistle blowing to begin with. It’s a two part series. We’re missing the second part: nobody goes to jail. What exactly was the scheme that Bank of America pulled off here? How much profit did they rake in by doing it?

Trinity Chavez: Well, Bank of America Merrill Lynch was systematically misleading clients about stock trades. The bank was apparently involved in a fraudulent masking scheme designed to mislead clients about who was responsible for executing in-house orders. Between 2009 and 2015, the bank told its customers that it was executing trade orders themselves, when they were actually routing them to electronic liquidity providers. This scheme affected more 16 million client orders. Merrill Lynch admitted to wrongdoing in the 415 million dollar settlement and misusing customer cash by holding up to 58 billion dollars a day in a clearing account, when it should have been held in a reserve. In this case, the Security Exchange Commission awarded the whistle blowers that were tied to the settlement, a staggering 83 million dollars. Two of them got 50 million, and the third one got 33 million.

Mike Papantonio: Well again, that’s a good start, Trinity. I know you cover these stories a lot and you probably see it a lot. You see where yeah, the regulators come in and they take some money from the company. The money is just cost of doing business. I mean these are companies, to pay out even a billion dollars, doesn’t mean anything to them if they’re making 20 billion dollars a year. It just doesn’t mean anything. The second part of the whistleblower schematic needs to be people need to go to prison. That’s the way it was initially designed, to tell you the truth.

Is it strange to you that the Bank of America ran with this fraud within the first year after they received 20 billion dollars in taxpayer bailout money from the government? I mean taxpayers came out of their pocket, paid them 20 billion dollars. Doesn’t that seem to say to them that the government’s going to reward you no matter what you do? Isn’t that kind of the message there?

Trinity Chavez: Well, let’s take a look at the facts. B of A Merrill Lynch received that 20 billion dollar bailout that you’re talking about in January 2009. That was after it already received 25 billion dollars from TARP. Soon after that is when the banks started with their masking scheme. I wouldn’t necessarily say that the bank is sort of being rewarded, but the government, … by the government. But, the numbers and the timeline, they do raise some suspicious questions, Mike.

Mike Papantonio: Yeah. Well you know, the truth is, Trinity, if you take a look and you really look closely beyond what tax payers had to pay out to make all this happen, to make … to give these bankers a free pass from stealing more than a trillion dollars from the American economy. Some people say it’s as high as eight trillion dollars, depending on who you’re talking to.

The impact that they had on the American economy and the world economy was substantial. None of them, again, nobody went to jail. Taxpayers pay out money to keep them out, so they can keep their profits. The same people who made those decisions are still in leadership with all of these banks right now. It’s a problem that I think, until we get somebody in there, and until we get an Attorney General, hopefully … I don’t think we can expect this from Jeff Sessions, but hopefully somewhere, we’ll have an Attorney General that says, ‘You know what? Democracy requires that we treat everybody alike, whether they’re on Wall Street or whether they’re on Main Street.’ Trinity, thanks for joining me.