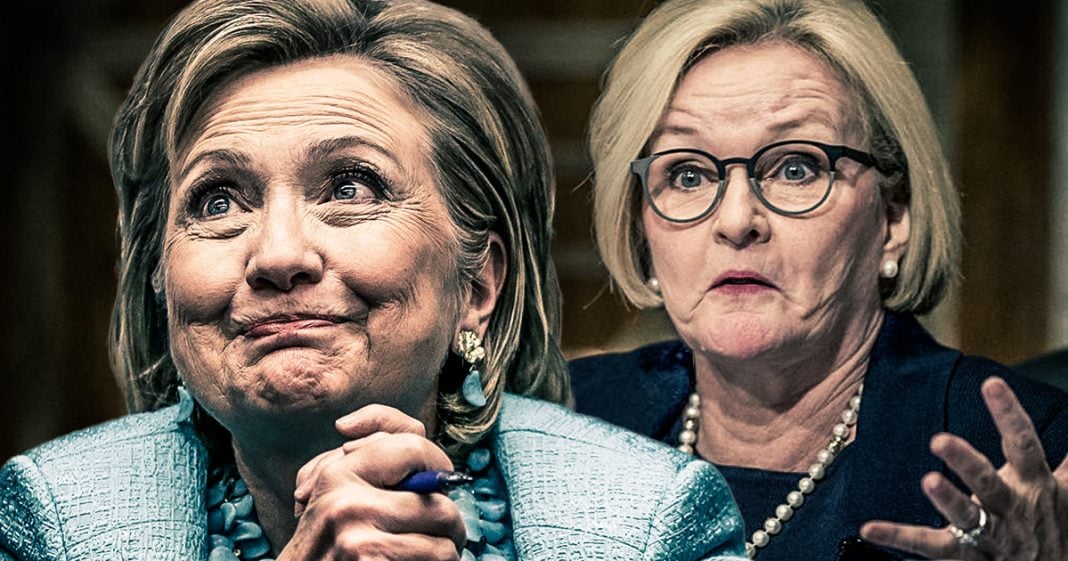 Democratic Senator Claire McCaskill said during a recent MSNBC interview that she would appreciate it if Hillary Clinton would stop being so mean to Trump voters because people like McCaskill still have to win reelection in states that Trump won. Hillary Clinton has done plenty of things that are questionable, but insulting a hate-filled, racist group of people isn’t one of them – She should stand by her words in this case, as Ring of Fire’s Farron Cousins explains.

Recently, Hillary Clinton came under fire for comments that she made about Donald Trump voters while giving a speech in Mumbai. She said specifically that she won the places that represent two thirds of America’s gross domestic product. I won the places that are optimistic, diverse, dynamic, moving forward, and she said that Trump voters, he won the places that are moving backwards. He won the racists. He won the misogynists, and basically explained what happened in the 2016 election. Well, she’s been castigated by both Fox News, Republicans, and now Democratic Senator Claire McCaskill wants to jump on the you have to apologize better train by doing an interview recently with MSNBC where McCaskill said that Hillary Clinton needs to be careful what she says. She needs to stop saying these horrible things, because some of us, like McCaskill, still have to run for reelection in states that Donald Trump won, and it doesn’t look too good for us when you’re out there insulting these Trump voters.

Hillary Clinton has done a lot of things over the course of her career that I don’t agree with, that I don’t like, but insulting Trump voters by telling the truth about them isn’t something I don’t like. I love that. I want to see more politicians speaking like that, and I’m sorry if it hurts the feelings and the reelection chances of people like Claire McCaskill, but if you want to get to the heart of what’s wrong with the Republican Party, you don’t sit there and attack Trump. You don’t even necessarily only go after Paul Ryan. You have to get to the voters. You have to expose them. You have to shine that flashlight on them, and they’re not going to like it. The public may not like it at first, but that’s what you have to do to weed out the problems with the Republican Party as a whole.

Trump is not the cause of this. He is the result of this, and it all stems from the voters. It stems from what Fox News has been feeding them for several decades. There is nothing wrong with what Hillary Clinton said, and I hate that, again, that I have to sit here and defend this, but I agree with her 100%. Trump voters are racists. They’re misogynists. Poll after poll has shown that most of the people in this country think that. Independent polling among those people have shown that they do hold those kinds of views towards African Americans, towards Muslims, and towards women, so what’s wrong with what she said? What did she say that wasn’t factually accurate?

You may not be happy about it, but that is the reality in which we live today, so you can get pissy if you want, Claire, but you also have to realize that those are the same people who would never vote for you ever. They would never vote for a Democrat, so what does it matter to you if an old school politician who’s not even running for anything goes out there and exposes them for what they are? That’s what needs to happen. Everybody in this country needs to see the Trump voters for what they are, and if it costs you a couple of votes here and there, then I think that’s a small price to pay for getting these people exposed and removing them from the American political system.