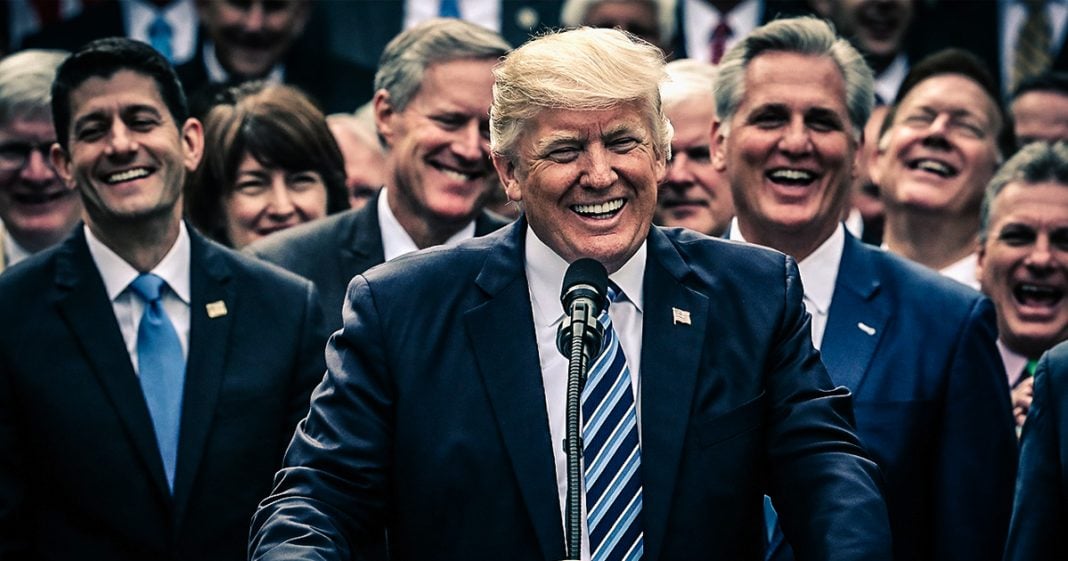 Farron Cousins takes twitter questions from the Ring of Fire audience this week on the ROF podcast. Jeff @jdupont19711 asks, “What will it take for the majors of the GOP to say enough is enough to trump. This man is just running free with anything and everything he says. WHY???”

We’re gonna take some questions from Twitter now. So if you have a question that you’d like us to answer on the show, tweet it to us using the #askROF. Our first question today comes from Twitter user @jdupont19711 who asks, “What will it take for the majors of the GOP to say enough is enough to trump. This man is just running free with anything and everything he says. WHY???”

What’s it gonna take for Republicans to do something about this? I don’t know. I don’t know because they never will. The Republicans in D.C. have shown us time and time again how spineless they are. A great story came out earlier this week talking about the fact that Donald Trump is considering firing Mueller, at least behind closed doors, so people want legislation to protect Robert Mueller and the special prosecutor’s office in the investigation. Four, four Republicans in D.C. have come out and said, ‘You know what? That’s a good idea, let’s have this legislation.’ 289 Republicans in D.C., in the House and Senate have either said, ‘No, legislation is not needed,’ or they’ve come out against legislation, or they’ve remained silent. Actually Diane Feinstein, Democrat has also said, ‘No, no, no, we don’t need legislation to protect him because Trump understands that’s a no-go zone.’ Yeah, as if anything has ever stopped Donald Trump from doing anything ever.

But that’s the point here, even people like John McCain who stood up to Donald Trump and then voted with him 100% of the time or almost 100% of the time. Same thing with guys like Jeff Flake, they talk a big game to the media, and then when it comes to these horrible nominees Trump puts forward, they’re like, ‘Yup, yup, yup, yup, yup, good to go.’ That’s not how opposition works. That’s not being a hero, that’s trying to be a personality cult inside the media. There are no, and I mean no Republicans in D.C. who are willing to actually stand up to Donald Trump. Lindsey Graham’s another great example, he was a loud voice, talkin’ about how bad Donald Trump was, until the two decided to go on a couple of golf trips together, then suddenly Lindsey Graham’s singin’ his praises. Now he’s back to saying we should protect Robert Mueller, but guarantee you all it’s gonna take is one more golf trip, or Donald Trump giving into Lindsay Graham’s idea for endless war in the Middle East, and then Graham will be right back on his side doing whatever Trump wants him to do.

These Republicans have no morals, but more importantly they have no courage. They don’t understand one simple truth, and this is what’s hilarious about it. They could be the absolute heroes here, they could save their own asses in the 2016 midterms by turning against Donald Trump. By saying this is not what the Republican Party is, we’re gonna be the ones to remove him, not the Democrats. We’re gonna do it, we know the public hates him, we win. They could do that, they’re not courageous enough and more importantly they’re not smart enough to understand how much power they have to actually get the public on their side. All they have to do is turn against Trump, what’s the worst he’s gonna do? Tweet at you a couple times? Really, like that’s gonna affect your life in any way? Come on. They have so much power right now, and they could be the heroes in this situation, but as usual, they choose to be sycophantic little suck-ups who want to make Trump happy even though they’re pissing off the majority of the American public.