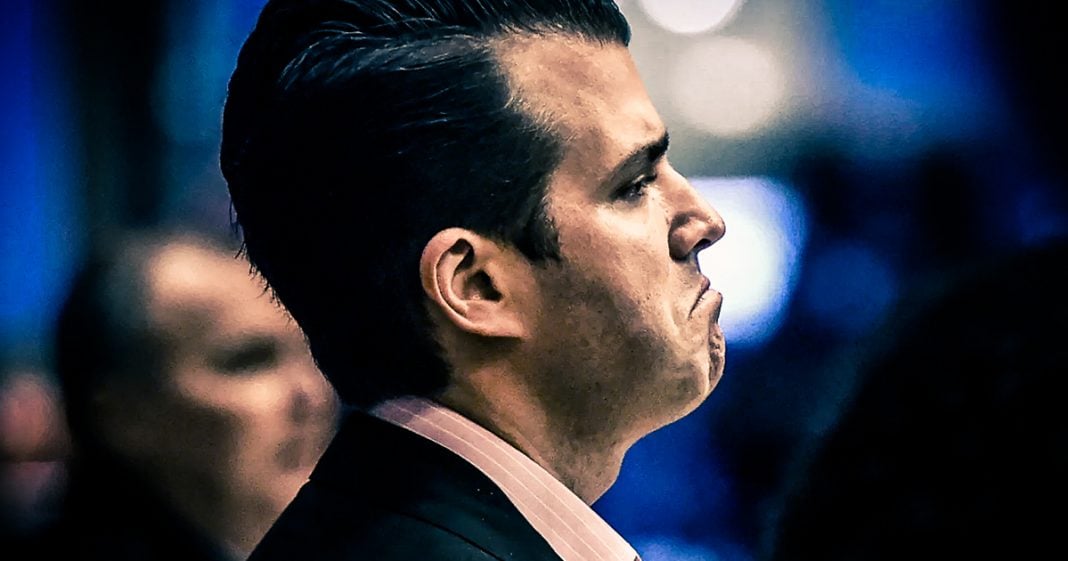 According to new reports, Donald Trump, Jr. would leave voicemails on his mistresses cell phone where he would be crying his eyes out telling her how much he loved her and how he was scared that his wife was going to take his kids away from him. There is no sympathy to be had for a philanderer, and Junior only has himself to blame for his relationship problems, as Ring of Fire’s Farron Cousins explains.

According to a new report by US Weekly, Donald Trump Jr. sobbed like a baby after his wife found out that he was trying to have a child with his mistress, Aubrey O’Day. As US Weekly reports after the affair had, I guess, ended Trump Jr. would still call Aubrey O’Day and leave her voice mail messages, many of which he was crying while he was leaving the message, saying that he loved her so much, but he was also so scared.

He was planning on leaving his wife, but he was scared that she was going to take those kids away from him. The report also says that Trump Jr. and Aubrey O’Day were actively trying to have a child together, says that Donald Trump Jr. did not use protection while they were engaging in sexual activities, and they wanted a baby but they just couldn’t make it happen.

Here’s the thing though. This story about him crying, and being so upset, “Oh, she might take the kids away from me.” Well, good. She needs to. Those kids need to have a positive male role model in their lives, and clearly you’re not cutting it, buddy. I mean look what happened to you, with the role model that you had growing up in your father, Donald Sr. That obviously had a huge impact on the way that you live your life. There is no sympathy here for this guy. If he was crying, if he was sad, if he was upset about it, so what. He did that to himself because he can’t keep it in his pants, because he wasn’t man enough to walk up to his wife and say “Listen, I’ve fallen in love with someone else. I’m sorry but our marriage is over.”

He could have done that. He could have done that. Marriages, unfortunately, do fall apart every day, and people move on, but if you move on before you have the courage to tell your spouse about it, and you start dating someone else, trying to start a new family when you think your wife doesn’t even know about it, then you’re a piece of crap, and that is exactly what Donald Trump Jr. is.

He just happens to be a piece of crap that got caught, and now being in the public eye, all of this is public information. This is stuff that everybody in this country can see, and I’m sure there’s plenty of conservatives out there who are dismissing it, or who say they don’t care about it, because to Republicans family values only matter if it’s a Democrat that does something bad.

Here we have a President who had an affair with a porn star while his son was having an affair with an Apprentice contestant. Those actually both happened right around the same time. Both of them leaving their families. Not caring. Not caring about the kids. Not caring about the spouses. Just caring about their own personal pleasure at that moment. That is how these men have lived their lives, and I think the best thing that Vanessa Trump could do, Donald Trump’s soon to be ex-wife, is to keep those five children as far away as possible from Trump Jr. just so that it decreases the chances that any one of them would grow-up to be like their disgusting piggish father, or ever worse, their piggish grandfather.