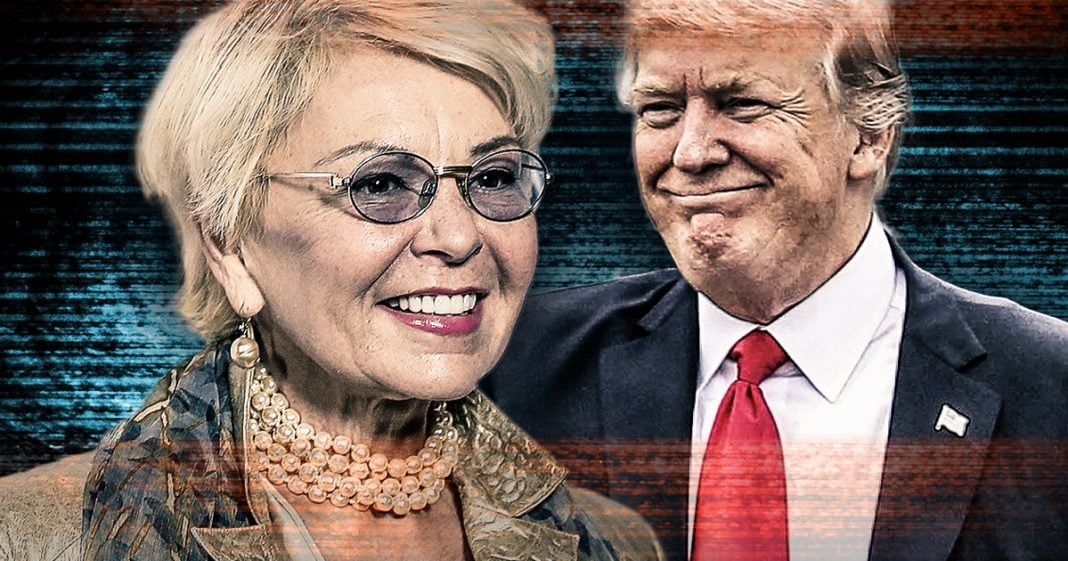 Donald Trump took some time out of his not-so-busy schedule this week to personally call Roseanne and congratulate her on the high ratings that the re-premier of her ABC sitcom received this week. Roseanne plays a Trump supporter on the show, so obviously Trump wants to believe that those ratings are all because of him. Ring of Fire’s Farron Cousins discusses this.

On Tuesday evening of this week, ABC premiered their reboot of the show Roseanne, starring Roseanne Barr, and it actually received 18.1 million viewers here in the United States. So on Wednesday, Donald Trump decided to call Roseanne himself and congratulate her on those hugely successful ratings for the show’s repremier. Now, the thing about this new show is that Roseanne, both in real life and on the show, is a hard-core Donald Trump supporter, so the premise of this new show, according to reports, is that it’s kind of a middle-class, working-class family divided by politics. Because the main character of the show is a Trump supporter, Donald Trump basically took it as that 18.1 million people were tuning in because of him. So he decided to call Roseanne and thank her for that.

Conservatives online have been just absolutely ecstatic about the fact that Roseanne is a Trump supporter. I’ve read through some of the comments that they’re putting on Twitter like, “Oh, I’m definitely going to watch this show just because of that.” You know, you guys need to grow up a little bit. Do you really dictate 100% of your entertainment choices based on whether or not a character or the actor supports your political beliefs? That’s got to be a really narrow world view for conservatives, I would imagine.

Now, I watched Roseanne when I was growing up. Didn’t tune into the new one this week. Nothing personal, I just didn’t have time to do it. Maybe I’ll watch it, maybe I won’t. This isn’t even so much about the fact that she’s a Trump supporter. That doesn’t matter. What matters is that Donald Trump has been MIA for the last five days, really. He hasn’t done anything publicly. He hasn’t been out there. He’s even been tweeting less since that Stormy Daniels story came out on 60 Minutes. So he took some time out of his not-so-busy schedule to congratulate a comedian on the success of her new show.

Is that really the most pressing issue that the President has to deal with this week? Is that really high on his priority list to thank someone who supports him because she had a successful night on television? I’m pretty sure that Trump could be working on anything else in the world right now, and that’s what this is about. This isn’t just about him wanting to congratulate her. This is about the fact that this man apparently has so little to do, and so little care about what’s actually happening in this country, that he thinks ratings for somebody else’s TV show are important. But that’s what Trump has always been about. It’s always about ratings. It’s always about people looking up to him, or wanting to be like him, or admiring him, while ignoring the real-world issues that, technically, he was put in office to handle. Congratulating sitcom stars is nowhere on the list of presidential duties, and it’s nowhere near being on the list of things that are actually important in this country right now.