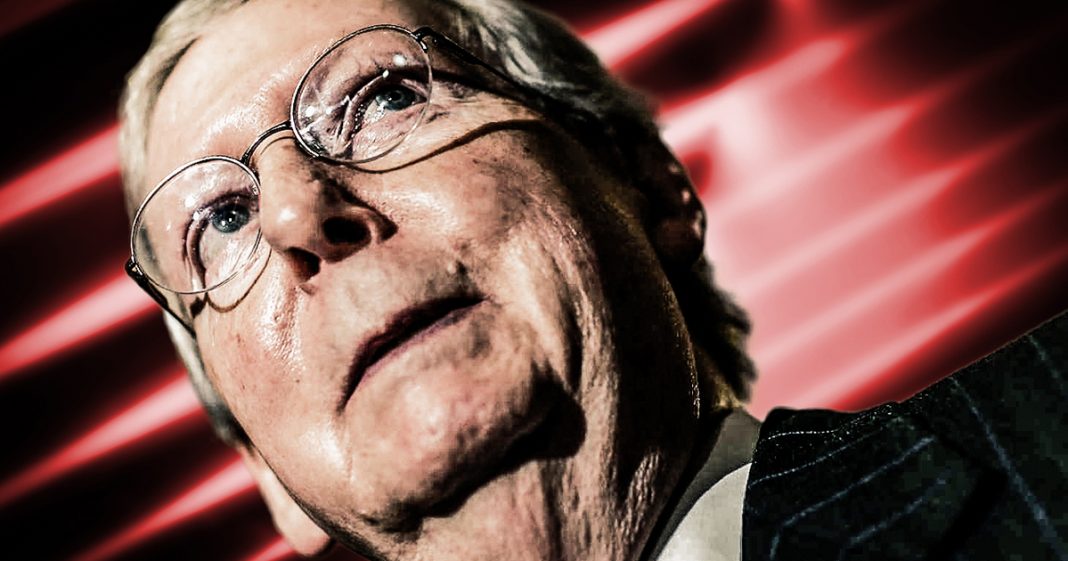 Republican Senate Majority Leader Mitch McConnell is stalling a piece of legislation that is supported by a bipartisan group of all 22 women serving in the senate. This particular piece of legislation would force members of Congress to use their own personal money to settle sexual harassment claims instead of using tax dollars to pay the bills, and McConnell apparently doesn’t think his colleagues should have to own up for their misbehavior. Ring of Fire’s Farron Cousins discusses this.

There are currently 22 women serving in the United States Senate, and every single one of those women, whether they be Republican or Democrat, have signed on to legislation that would force members of congress to pay for their own sexual misconduct allegations, and defenses, and settlements out of their own pocket rather than using taxpayer money. Mitch McConnell, the Republican Senate Majority Leader, is apparently, according to report, stonewalling this legislation because he does not believe that men in congress should have to pay for their own sexual misconduct out of their own pocket. He wants them to be able to keep dipping into those tax dollars that we pay and use that to pay the victims their settlements or to fight these lawsuits. Mitch McConnell is single-handedly protecting every pervert in congress.

Over on the House side, there’s really not much difference. This legislation, Paul Ryan had promised us was going to happen immediately after it was revealed a few months ago that millions upon millions of dollars had been spent from the tax pool in order to pay settlements to sexual harassment victims by members of congress, but Paul Ryan has done nothing either. He’s not championing this legislation. He’s not out there talking about it anymore.

We have a bunch of men right now running congress, the House and the Senate, who are trying to protect the other piggish men in the House and the Senate, and who knows? Because we don’t know the full extent of who has been accused of doing what and who has made payments. They may be protecting themselves at this point. We don’t know. That’s another part of the problem, not just that it’s happening but that we don’t know who all these disgusting, incontrollable people are that are representing us in the United States congress.

It is absolutely abhorrent that these men are going against a unanimous bipartisan group of women just to protect the scumbags that we have serving in DC, because at this point that’s what they are. If you do the kinds of things that have to result in a sexual harassment or sexual misconduct settlement, then you’re a scumbag. There’s no other way to slice it, but Mitch McConnell and Paul Ryan would much rather protect those scumbags than protect women at any level throughout this country.