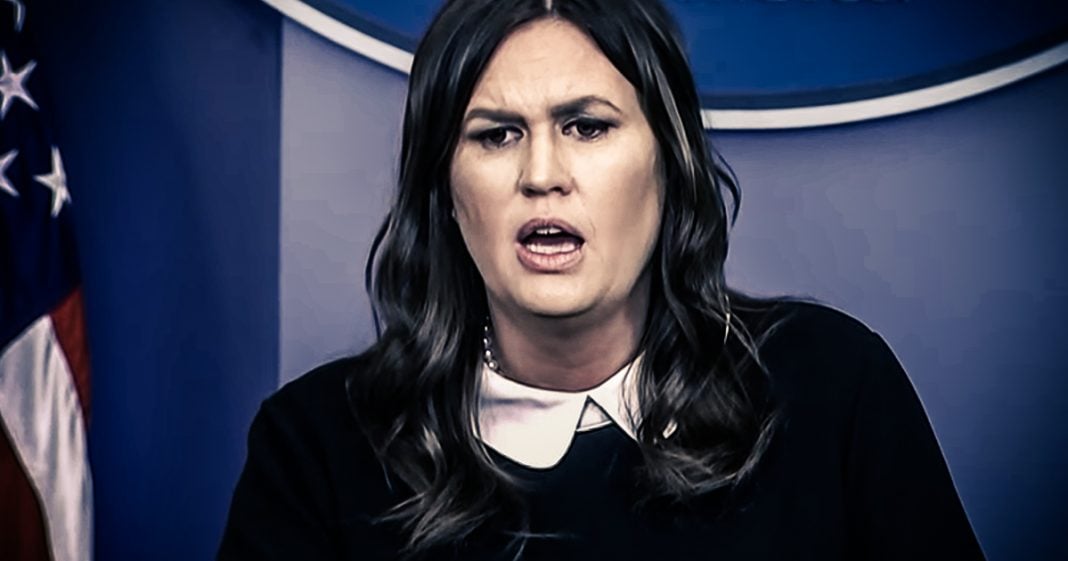 During Tuesday’s press briefing, Sarah Huckabee Sanders insisted that the White House ethics office was absolutely not investigating loans received by Jared Kushner. Unfortunately for Sanders, a letter received by Congress reveals that the White House is definitely investigating Jared Kushner, so either Huckabee Sanders is lying to the American public, or she has no idea what’s going on. Ring of Fire’s Farron Cousins discusses this.

On Tuesday during the White House press briefing, Sarah Huckabee Sanders was asked about the White house investigation into Jared Kushner’s activities, and his potential ethics violation after meeting with executives from Citigroup and Apollo Global Management where he, after the meetings, ended up receiving a total of $500 million in loans from the two organizations.

Either Huckabee Sanders is lying to the press, or the White House council’s office is lying to members of Congress, because the reason we even know that this investigation was allegedly happening, was because of a letter that was sent to Democratic representative Raja Krishnamoorthi where it said that, yes, the White House office ethics is well aware of this, and we are looking into the matter.

That would indicate that, yeah, they know that Jared Kushner’s doing some shady things, and their looking into it. Maybe not be a full blown investigation, but they’re trying to get to the bottom of it. So either the ethics office lied to representative Krishnamoorthi, or Sarah Huckabee Sanders lied to the press, or, and this is more probably, Sarah Huckabee Sanders has absolutely no idea what’s happening inside the White House, probably because she doesn’t want to know.

Now I think it might be a combination of all three to honest with you, Sarah Huckabee Sanders told several other very blatant and obvious lies during that Tuesday press briefing, including the fact that there’s always been a citizenship question on the US census, which is completely untrue, they stopped doing that I believe in 1950.

So nonetheless, Huckabee Sanders has a history of being dishonest with the press, with the American people, but she’s also shown to have a history of not knowing what is going on in the White House whatsoever, much like Sean Spicer before her.

Now I firmly believe that Huckabee Sanders would absolutely lie about what’s happening with Kushner in order to protect the White House a little bit and to avoid any more negative press. After all, Donald Trump’s approval ratings have tipped all of the way up to 42%, and you don’t want to screw with that considering that’s the highest he’s has since taking office. So yeah, they probably want to avoid the appearance of anything going badly within the White House, especially with the President’s son-in-law.

Again, there’s several different combinations of things that likely happened here, but I’m personally gonna go with one: Sarah Huckabee Sanders is an absolute liar, and two: she has no idea what’s really happening inside of her own White house.