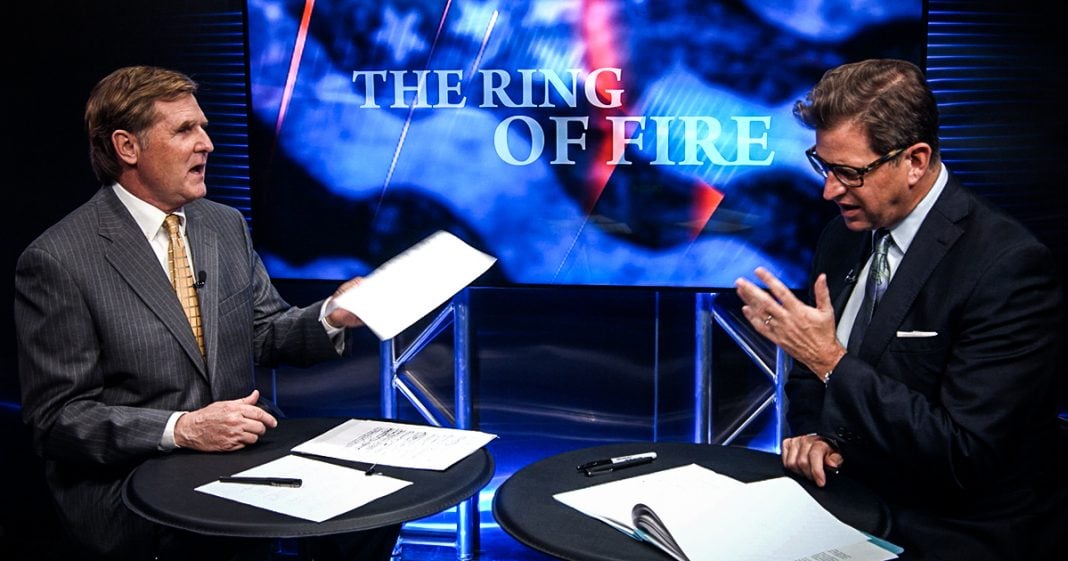 It was recently revealed that Facebook allowed data from 50 million users to be obtained by the firm Cambridge Analytica without users’ knowledge, and now the calls for the social media giant to be regulated are growing louder than ever. Facebook is in it for themselves – they don’t care if your data gets stolen, and that’s even more reason to put regulations in place to protect consumers. Ring of Fire’s Mike Papantonio and Peter Mougey discuss this.

Mike Papantonio: Yeah. It was recently revealed that Facebook allowed data from 50 million users to be obtained for the firm Cambridge Analytica without its users’ knowledge, without anybody knowing what was going on, and now the calls for the social media giant to be regulated are growing loud. Facebook is in it for themselves, they don’t care if your data gets stolen. You just have to know that. This idea that there’s some higher meaning to Facebook in the social media crowd is nonsense. They’re all in it to try to make money. They don’t care if your data is stolen. That’s even more reason to put regulations in place for … through the effort of protecting consumers. This is not a minor … This is a big deal for-

Peter Mougey: This is a big story.

Peter Mougey: The story’s breaking, and the company that used the data started out with 270,000 Facebook users but then they scraped all of the data from their friends so that number just extrapolated. Cambridge Analytica’s the same company that worked on the Trump campaign, so it’s starting to tie together with some of the stories we’re hearing about the Trump investigation as well.

Mike Papantonio: Well, I mean, I don’t see what the Trump investigation … I mean, I see this as a separate issue. But I do think we’re going to learn a lot about what Facebook was really up to, Peter. First of all, here’s what bothers me about it. According to the stories, Facebook supposedly told Cambridge “Destroy the material. Take it out of your system. Don’t use it anymore.” Okay. Well, that was in 2015 that they did that-

Mike Papantonio: … and we just found out about a week ago.

Mike Papantonio: So for two years, it’s been hanging out there. Nothing’s really happened in that regard, and so for Facebook to say “Oh, gee. We didn’t know. We thought they were going to be honest. We didn’t know how Cambridge was going to use it,” it’s just nonsense. I mean, you’d have to be in la la land to believe what this company is saying right now. But look, all you have to know is that they put this company on notice, they sent a written notice to them, and nobody followed up in two years? Nobody said “Hey, give us proof that you’ve destroyed this material,” when you’ve got access to 50,000 names? So I’m not sold on this defense, and I think it unfortunately you’re going to get the goobs up in DC now interested in having to regulate because somebody just gets greedy. That’s all that happened. He made-

Peter Mougey: Well, and they can’t-

Mike Papantonio: … money on this.

Mike Papantonio: They made a lot of money on this-

Peter Mougey: As we keep saying that these industries are going to police themselves and they’re going to be able to regulate themselves … It’s called SRO, self-regulatory organizations-

Mike Papantonio: Well, you know what-

Peter Mougey: … are “Oh, we thought they would do the right thing,” this is the wild west. That’s where Facebook-

Mike Papantonio: You know what’s so-

Mike Papantonio: … amazing? When you hear people talk about this, they’d say … It’s almost as if we’re looking at this social media bunch of corporate types like they’re different than-

Mike Papantonio: There’s no difference. It’s the same playbook. It’s all about money. It’s all about trying to get that bottom line as high as you can. The main thing is this. Look, if I’m handling the case, I’m looking at the concept of their actions being contrary to the expectations of users. Right?

Mike Papantonio: I mean, that’s what it is. As a user, you have a certain expectation. You believe in that expectation, everything’s going to be okay. Surely, this is a big, sophisticated company. They’re a part of the new and improved and warm and fuzzy social media crowd. They’re not going to do anything wrong-

Mike Papantonio: Yeah, it got hammered.

Peter Mougey: … last week. They’ve actually been sued in a security suit for the declines because the-

Mike Papantonio: Well, talk about what-

Mike Papantonio: … a derivative suit is.

Peter Mougey: I thought it was a derivative suit at first but when I looked at it, it’s actually a failure to disclose that … The theory of the lawsuit is that the policies and procedures that Facebook had, they didn’t follow, and they reported those to the investing public so that anyone bought a stock from November 2017 on paid an inflated dollar amount for it, and now it’s tumbled. I think that the value, the market cap, that was lost … the number’s crazy. I think it’s over $50 million. It’s huge, so the lawsuit’s going to … it just got filed, and they’re moving forward. It’s a straight security suit.