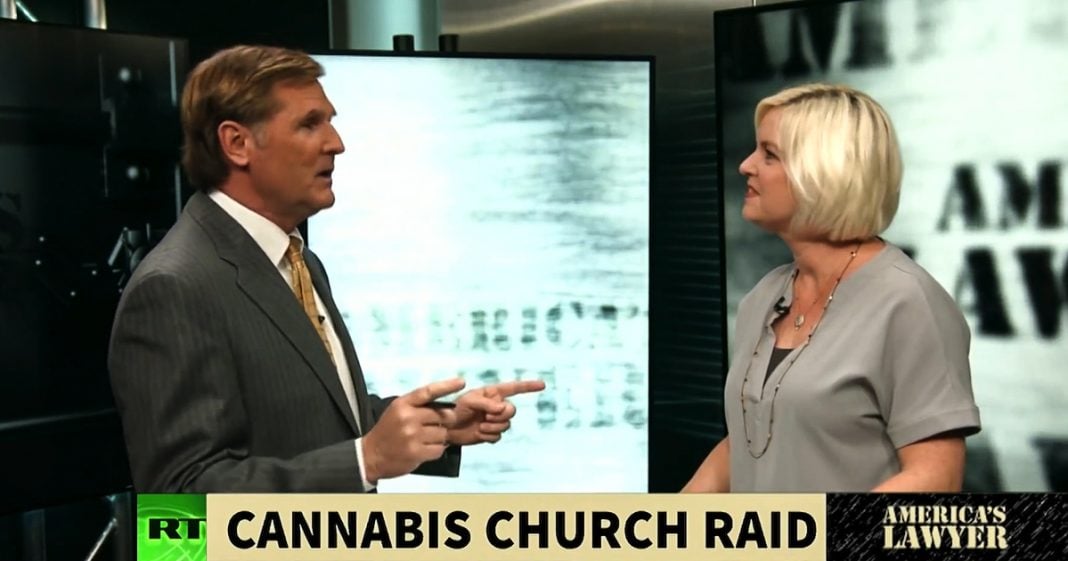 Via America’s Lawyer: Mike Papantonio is joined by Mollye Barrows to talk about a Marijuana Church that is suing the police department that raided their church and confiscated $30,000 worth of cannabis.

Mike Papantonio: A cannabis church in California is suing their local sheriff’s department for raiding their church and seizing $30,000 worth of marijuana. Cannabis is accepted by the church as central and vital to their beliefs and they wanted the authorities who raided them to be held accountable for violating their right to religious freedom. Mollye Barrows, let me just ask you straight up. This, as you look at it, it’s not much different from the Rasta issue, is it?

Mollye Barrows: You’re right. They’re basically saying that marijuana is a central part of their beliefs and the founder is this guy named Brent David Fraser. He opened it last fall, September of 2017. Within two months, the county, Los Angeles sheriff’s department, as well as the county and city is who their suit is again, basically raided this place, collected some $30,000 worth of marijuana, packaging, edibles, that sort of thing and they’re saying, “Hey.” Mr. Fraser said, “This is my church, The Association of Sacramental Ministries. We’re no different than the Catholic church providing wine as a sacrament or the Rastas using it,” or even there’s a ministry of Peyote I have discovered. So I guess you can justify any use of a substance to take you to another plane, if you will.

Mollye Barrows: That’s what they seem to be.

Mike Papantonio: The dudes abide, right? Well, okay, as I look at this story, though, I mean, it looks like they may have some decent grounds. There’s some case law that could really go either way on this.

Mike Papantonio: But my call on this as I look at it is what grounds did the police have to pull this raid off? What were they saying when they said they went in?

Mollye Barrows: That they’re essentially operating it as a business and they’re saying, “No, no. We’re not a business. We’re a church. It’s part of the Sacramental Ministry Church,” and they’re saying, “No. Now that recreational marijuana is legal, you have to be licensed in order to sell it and you have to pay taxes on it.” So I think that’s where we’re getting down to the nitty gritty.

Mike Papantonio: My call is that’s where they lose. Was this part of the Department of Justice’s crackdown on legalized marijuana? I mean…

Mollye Barrows: Not necessarily. Nobody’s saying that directly. This was one of three places that the sheriff’s department raided during this time span. So they’re saying it was just part of their crackdown essentially on any businesses that are trying to operate without being properly licensed and without paying taxes and they’re saying, “But we’re different. We’re a church. We’re not necessarily a business and we operate like a nonprofit anyway.” He’s established this church as a nonprofit. But it’ll be interesting because he’s hired an attorney who’s making a name for himself there, Matthew Poppas, representing other dispensaries that have been illegally raided or raided in a way that violated civil rights.

Mike Papantonio: None of them are saying, “We’re a church.” But this is at least a unique argument. It might keep them out of jail. Okay, but this one lawyer, I guess, is going all up and down the California coast handling this. What is his name so people can-

Mollye Barrows: Matthew Poppas and I may be mispronouncing it. But maybe it’s Poppas. But I think it’s Poppas and he basically has pulled video from different raids of these other two high profile, well publicized raids. With the cops, he says they’re essentially sampling what they’re stealing, if you will, what they’re raiding, what they’re collecting as evidence and other violations and he said, “Look, this is about retaliatory behavior. They’re not necessarily upholding the law. They’re not even abiding by their own laws when they go into these facilities. They need to treat this like they would other businesses.”

Mike Papantonio: What I see about this, this at least gives these folks one more layer of protection if they’re able. I mean, look, Scientology. I mean, really?

Mike Papantonio: Scientology is a church and as you look at the Scientology church, you kind of have to wonder why them and why not these folks who say, “Look, this is part of what we do, like the Rastas, and we feel like this is something that should be protected.” I think it’s a tough argument.

Mike Papantonio: Their best argument is, “No, we don’t because we’re church.” But a church even has to follow statutory guidelines.

Mike Papantonio: So I guess it’s one element of protection. But I don’t think it’s enough protection.

Mollye Barrows: No. I agree and I got to thinking about the 30,000 that they mentioned in the lawsuit as the police confiscating during the raid and I thought, “Does a Catholic church have $30,000 worth of wine handy for Communion?” Is that a good argument?