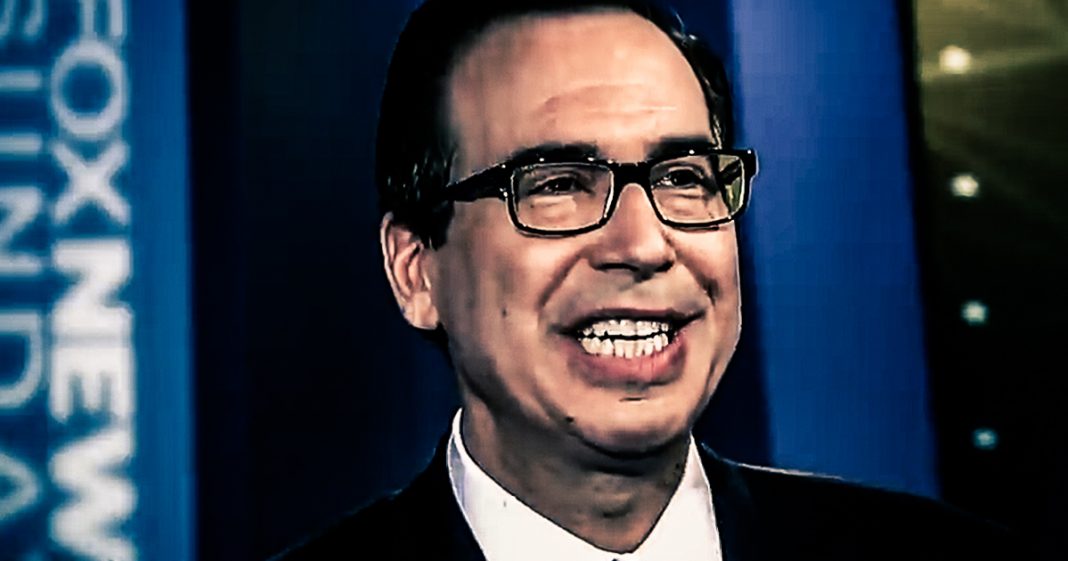 During an interview with Fox News’ Chris Wallace to discuss the recently-passed budget, Treasury Secretary Steve Mnuchin repeatedly said that the President needs to be able to use a line-item veto in the future. Wallace had to point out several times that the Supreme Court had ruled these vetoes unconstitutional, but that didn’t stop Mnuchin from displaying his ignorance for all to see. Ring of Fire’s Farron Cousins discusses this.

Treasury Secretary Steve Mnuchin appeared on FOX News this past weekend to discuss the recently passed spending bill that Donald Trump signed, but Donald Trump was totally not cool with signing it even though he did it anyway. Steve Mnuchin had to go on FOX News to explain this away and make Donald Trump’s case for him. Unfortunately for Mnuchin, the fact that he knows nothing about the federal government or the laws of this country was on full display and Chris Wallace, FOX News host, was not afraid to let him know that. Take a look.

Chris Wallace: I was gonna say, that’s gonna happen next time when the next spending bill comes up in October. They’re gonna be demanding parity, as well. I’m not saying that’s right or wrong, but it is reality.

Steve Mnuchin: It doesn’t need to be reality and I’m not gonna comment on what the president will do. But as you heard him say, he’s not planning on doing this again. I think they should give the president a line item veto. These things-

Steve Mnuchin: Well, again, Congress could pass a rule that allows them to do it.

Chris Wallace: No, no, it’d be a Constitutional amendment.

Steve Mnuchin: Chris, we don’t need to get into a debate in terms of- There’s different ways of doing this. My comment is it’s clear what happened.

Repeatedly in the span of about 50 seconds, Steve Mnuchin called for Donald Trump to violate the US Constitution and then when he was told that it violates the US Constitution, he then said, “Well, Congress could pass a law,” which as Chris Wallace said, “No, that’s also a violation of the Constitution, you moron.” He didn’t add the “you moron” part, but I’m pretty sure he was thinking it in his head. Yeah, you’d have to have a Constitutional amendment in order to make it Constitutional.

Then Mnuchin said, “I don’t wanna get in a debate about this, I don’t wanna talk politics.” No, you don’t wanna talk about anything intellectual because you don’t know what in the hell you’re doing. You don’t belong in the federal government, yet somehow because you have a lot of money Donald Trump thought you would be a good pick for the Treasury Secretary. You don’t belong and you prove it every single time that you open your mouth.

I would hope that people across this country, be it Democrat, Republican, Libertarian, or Green Party, would agree that we probably should have people in the federal government who understand the most basic tenets of the US Constitution and understand what laws are and what laws can’t be because of the Constitution. Steve Mnuchin is not that guy. Steve Mnuchin is too stupid to serve in the federal government, and even FOX News reached a point this past weekend where they had to point that out to him.