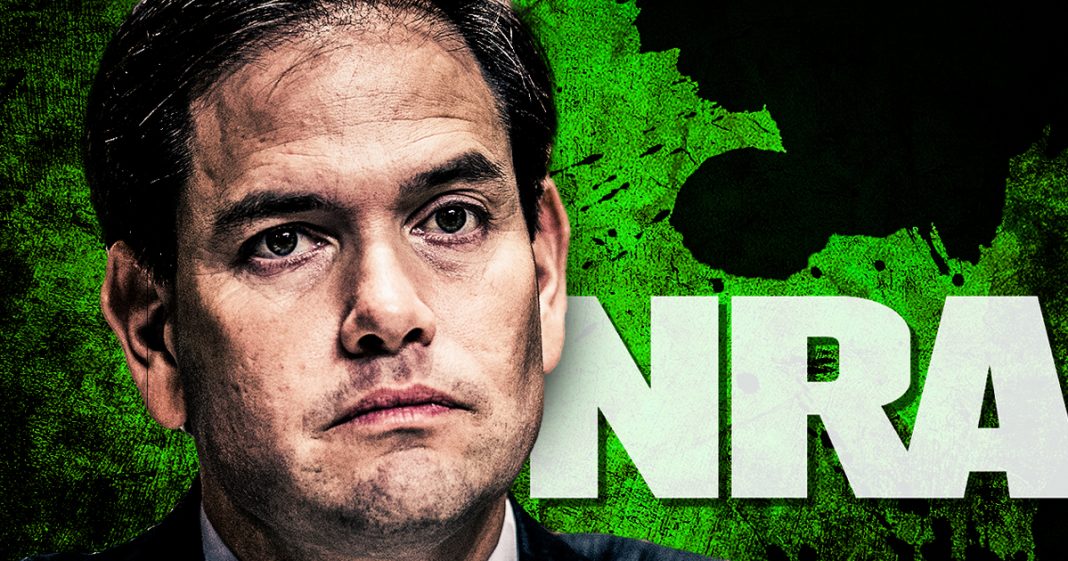 Republican Senator Marco Rubio proved how tone deaf he truly is this past weekend by defending powerful interests like the NRA instead of standing up for the children around the country that were marching to protest the growing violence that they experience in their schools due to the abundance of assault weapons on our streets. Marco Rubio is committing political suicide here, and he’s not even smart enough to realize it, as Ring of Fire’s Farron Cousins explains.

This past weekend as hundreds of thousands of American citizens led by youth were standing up for their right to be able to go to school and not get shot by a psychopath, while they were standing up for their right to live, Republican Senator Marco Rubio from Florida was standing up for the NRA. Marco Rubio bravely decided to take the side of those poor, oppressed souls at the NRA and issued a statement, before the marches ended, saying the following, “I respect their views and recognize that many Americans support certain gun bans. However, many other Americans do not support a gun ban. They too want to prevent mass shootings but view banning guns as an infringement on the Second Amendment rights of law-abiding citizens that ultimately will not prevent these tragedies.”

Here’s the thing, idiot, and I’m going to address you as idiot from now on, Mr. Rubio. Nobody is proposing banning guns. Nobody has proposed just an outright ban on guns in the United States. You’re lying. Second, Mr. Idiot, the majority of people in this country, 60% I believe, according to the latest polls, actually support banning assault weapons. You know, like an assault weapon ban that we had in place for a very long time that saw a dramatic reduction in mass shootings in the United States. There is a correlation between letting that assault weapons ban expire and the increase in mass shootings here in the United States. But you don’t care about facts and figures and statistics and reality. All you care about, idiot, is protecting the NRA because for some reason they and the money that they give you is more important than the lives of children.

Hell, you represented the children that were slaughtered in Parkland. You represent the children, as a senator, who are leading these marches and you are terrified of them and I love that. I love that we have Republican politicians right now terrified of 17 and 18-year-old children because they suddenly just realized how much power they have. Both sides just realized how much power these kids have. The kids realized it and the Republicans realized it. In addition to marching this past weekend, for their lives, they also managed to register a record number of new voters in a single day. How does that make you feel, Rubio? How does that make you feel, knowing that these kids are not only just active on this issue but they’re getting other people active in politics? They’re registering people to vote.

Do you think those people are going to go to the polls next time you’re up for reelection and say “Oh, yeah. Marco Rubio, what a great, stand-up guy who didn’t support my right to live but instead supported the right for the NRA and their funders to sell more guns”? These kids are going to remember that. Marco Rubio has committed political suicide on the issue of guns because he would rather protect the interests of the NRA than the lives of our children, and that is what this is about. This isn’t about getting rid of guns in the United States. It’s about making sure that weapons of war that are designed to kill as many people in as quick of a time possible are not in the hands of civilians. People who’ve spent their lives in the military, people who’ve spent their lives on police forces, agree with that statement. They don’t see any need whatsoever for civilians to have these guns, and at one point the Federal Government believed that too. But it was during the Bush administration that they let the assault weapons ban expire, and that’s when mass shootings starting going through the roof.

We can go back to that ban. It’s been in place before. It is constitutional. You can still keep a handgun or a shotgun in your house for protection, but you have no need whatsoever to have a weapon of war in your home to protect you. And if you do, you need to reevaluate your life and figure out what you’ve done to apparently piss of so many people that you feel that you need an AR-15 just to protect your home. That sounds like a personal problem to me, not a political one. But the young Americans who led these marches all across the country, they’re the ones who are inspiring change and they’re the ones who are striking fear into the hearts of people at the NRA and within the Republican Party. Unfortunately for Republicans, they’re not going to go away anytime soon.