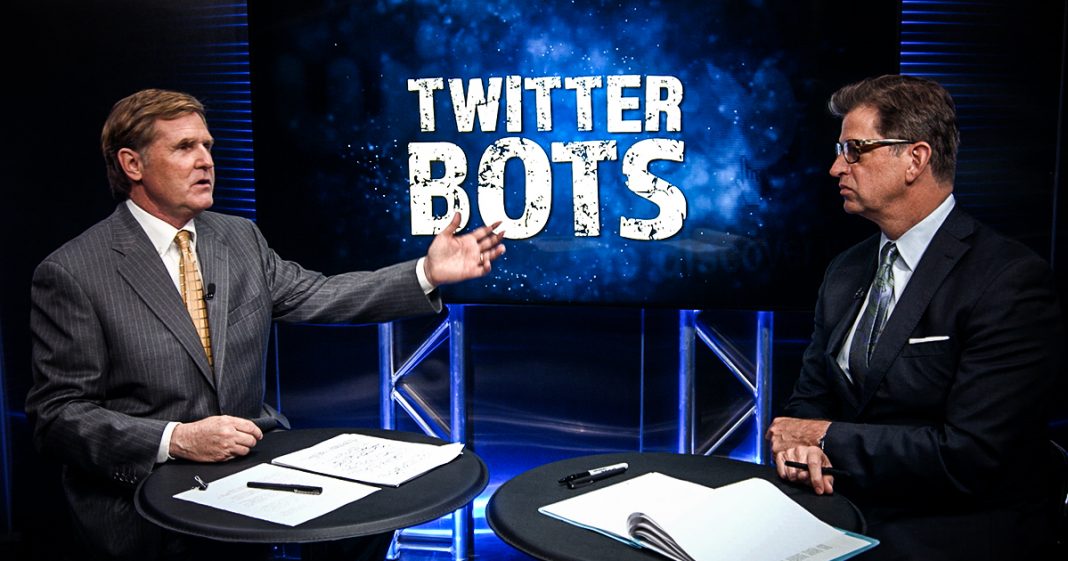 A new report has helped to expose the Twitter BOT army being used by establishment Democrats, and it may have also opened the door to a new wave of litigation against people who use these bots to silence others online. Ring of Fire’s Mike Papantonio and Peter Mougey discuss this.

Mike Papantonio: A new report just helped expose the Twitter bot army that’s being used by establishment democrats. It’s being used by a lot of people, but this case came to the light because they found established democrats have opened the door to a new wave of litigation against people who use these bots to silence others.

Now, this is easy to follow. What you have is you have political organization, Sally Albright. Take a look at Sally Albright. This where this started. Sally Albright is this huge I Hate Bernie person. If she could kill Bernie, I bet she would. She just absolutely despises Bernie.

Peter Mougey: She hates Trump too.

Peter Mougey: She hates Trump too.

Mike Papantonio: Hates Trump too, but loves Hillary. Okay, so what does she do? She puts together this nothing. It’s just this system. It’s a scam where all of a sudden-

Peter Mougey: It is a scam.

Mike Papantonio: All of a sudden, it looks like she has this huge influence of followers behind her. It’s just nothing but-

Peter Mougey: She’s tweet, and then the bots that she owns, the B-O-T like robots, bots that she owns, which are hijacked scam Twitter accounts, retweet whatever she does. Let’s say I’m Albright and I tweet. I have a message. Then right after me, all of the puppet bots-

Peter Mougey: Will come in in thousands of messages.

Mike Papantonio: Okay, but what’s she’s trying to do-

Peter Mougey: It drowns out all the other communications.

Peter Mougey: A North Carolina professor called it a new form of censorship.

Mike Papantonio: It is censorship.

Peter Mougey: I love that quote.

Mike Papantonio: What you do is you drown out the other side to where they can’t be heard.

Peter Mougey: So many things you can’t talk.

Let me tell you where this is heading. Prediction, here it is. We now know because of this ruling that this thing that we call social media, let’s say you have a site. Your site is a personal property with value. You follow me?

Mike Papantonio: Peter Mougey’s got a site. Advertisers pay every month to come to your site. You’re doing good. $4,000 a month, %5,000 a month you’re making on your site because it’s a great site. All of a sudden, a Sally Albright type comes in and doesn’t like what you have to say about Bernie, so she floods your system with the bots. Now, I got to tell you, I’ll take the case of I’ll get you the lawyer who will take the case against Sally Albright, because that is a great case. What you’re actually doing is you’re taking away a value. It’s a money value, Peter.

Mike Papantonio: But wait a second.

Peter Mougey: Not the money value of the company. I’m saying that Albright-

Mike Papantonio: Exactly, but let’s stay on this other issue. You have a money value, okay. Sally Albright is taking away, because she’s burying your site down so people don’t want to come to the site. You’ve got these fakes coming to the site, whatever it is, whether it’s Twitter-

Peter Mougey: It would be no different than coming outside of your brick and mortar store barricading the outside so no one can get in.

Mike Papantonio: Okay, so whether it’s Twitter, if your Twitter is part of the way that you use your site, if the two are connected, it means you’re bringing in money. All of a sudden, these kind of characters, all of a sudden they’re taking a money interest. They’re taking a piece of property away from you.

Mike Papantonio: The lawsuit, let me just tell you, if this follows where it’s going and you see that the DNC is involved in this, that this isn’t just some harebrained scheme by Sally Albright, if this heads to the DNC, this is really ugly. I mean this is something that can shut down the lawsuit here depending on who they go after. Let’s say you’ve got-

Peter Mougey: What’s interesting though is who found this. Again, where are the regulators? Nobody finds it. A guy off the street that’s a Bernie support notices the pattern. That’s a little scary that no one picks it up.

Mike Papantonio: A viable business is going to get beat, and the lawsuit is going to be substantial.