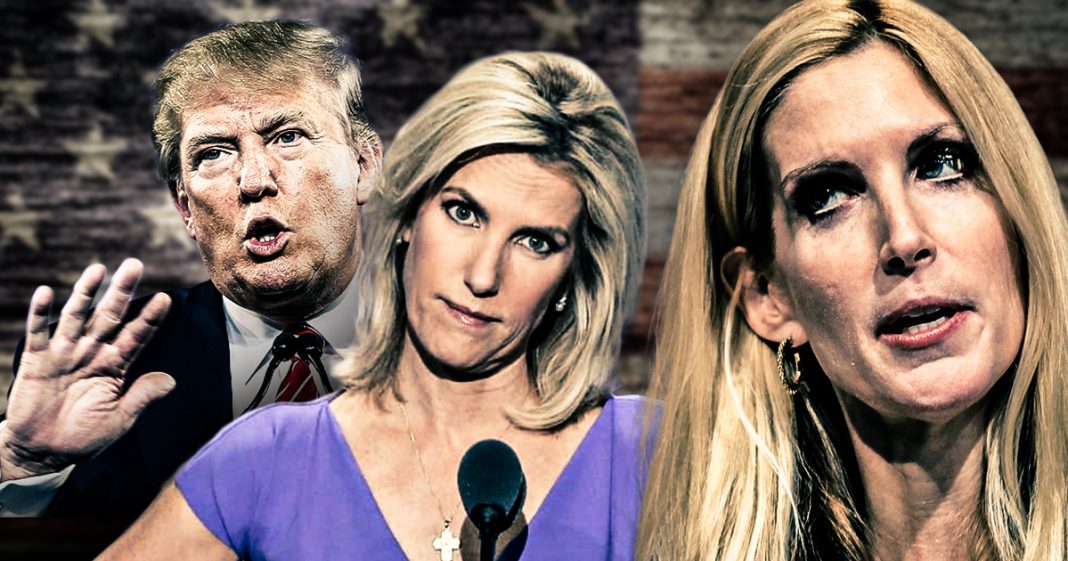 Donald Trump may have alienated some of his closest allies (at least temporarily) on Friday after he signed a $1.3 trillion spending bill after promising to veto the legislation. Ann Coulter and Laura Ingraham both said that he’ll be impeached (or should be impeached) following his backtracking, and The Drudge Report slammed Trump over his “fake veto threat.” Without allies in the conservative media, Trump has no one left to defend him, as Ring of Fire’s Farron Cousins explains.

On Friday, Donald Trump signed a 1.3 trillion dollar spending bill after he promised us that he was going to veto that 1.3 trillion dollar spending bill. After he announced his intent to veto this, he then gave a press conference where he said “I’m not going to do anything like this again. Yeah, I’m going to sign this but you’re on notice here. This is totally the last time I’m ever going to do this so you need to straighten up and fly right there, congress.” And, immediately, in a collective form of duh moment, republican voters and republican Donald Trump supporters realized that they had been conned.

It was a beautiful, beautiful moment, and I don’t want to get into how horrible this budget is because it absolutely is, but what was great about it was that collective light bulb going off over the head of Donald Trump’s supporters. Including people like Ann Coulter, and Laura Ingram who, after Trump signed the budget bill, basically said that he was going to be impeached. Ann Coulter said that when Trump said I’ll never do something like this again, she responded by saying, “Yeah, because you’ll be impeached.” Even the Drudge Report had to come out and attack Donald Trump for his fake veto threat.

Donald Trump just alienated a ton of his closest allies because he is a fraud. He is a con-man. If you go through some of the comments on Twitter on these stories, the Trump voters now understand that. They admit, “Yeah, we got conned by this guy, we thought we were getting a negotiator, instead we’re just getting a lap dog who rolls over for congress.” As soon as Trump says something horrible and racist, all these people are going to back on his side again, so I’m sure his advisors are trying to come up with something stupid for him to say to get the Coulters and the Ingrams and the Drudge Report folks back over on his side.