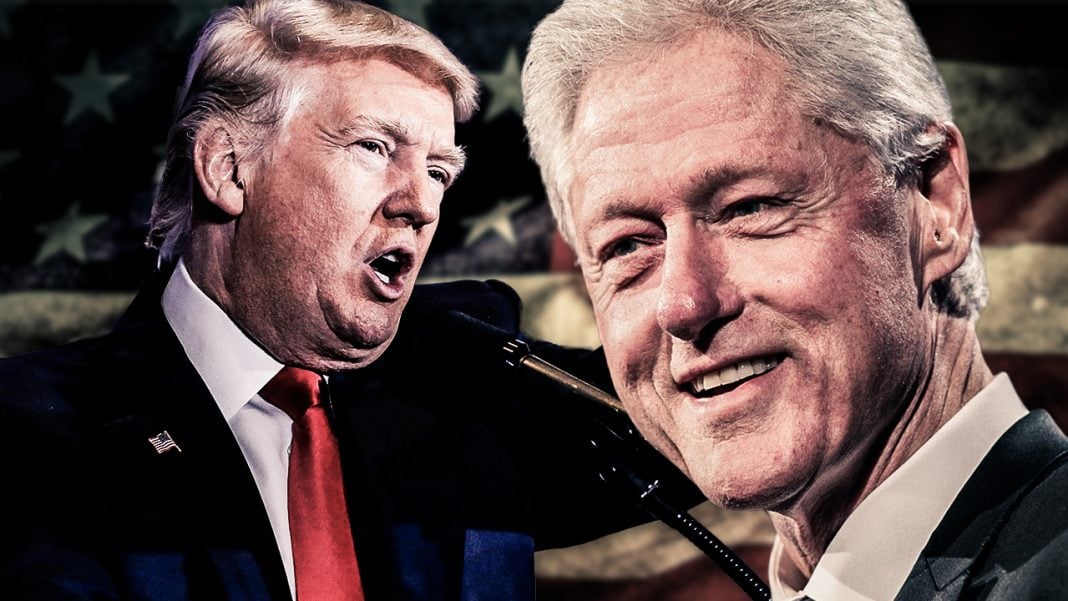 The Trump administration, and even the campaign of Donald Trump, has proven the glaring hypocrisy of Republicans in Congress and throughout the country at every given opportunity. Think about it this way – When Bill Clinton was President and Republicans were trying desperately to take him down, they accused him of doing virtually all of the things that Trump and his family have been accused of doing (and on a much larger scale than Clinton was accused of.) Ring of Fire’s Farron Cousins explains why the Republican Party could be completely destroyed by Trump’s administration as a result.

To me one of the most interesting things that’s happened during the entire Trump administration is the fact that all of the alleged crimes that Trump and his family have been accused of doing are actually the exact same kinds of crimes that republicans used, or attempted to use, to take down Bill Clinton when he was president during the 90s. Think about that. All of the investigations that were launched into Bill Clinton are kinda mirror images of what we’re seeing today with the Trump administration. The Whitewater Real Estate Scandal. Oh really? You’re gonna ignore the Jared Kushner Real Estate Scandal where he lied on official documents so that he could kick people out of their rent controlled apartments and then sell them for twice what he paid for them? Yeah, that’s illegal but you’re not saying anything about that are you Republican Party?

Then, obviously, the most glaring one is the sexual misconduct. How many investigations did republicans in the 90s launch into Bill Clinton just to get a little glimpse of what this man was doing behind closed doors and whether or not it was legal or illegal? Eventually they were able to pop him on lying under oath which is why he was impeached. He wasn’t impeached for the affair, it was lying about the affair under oath. So that’s what they used to take him down. According to opinion polls, it actually only made him more popular. But nonetheless, we have a president right now that’s being sued by, or at least accused, excuse me, of sexual misconduct by no fewer than 19 women and yet I don’t think I’ve see a single republican in congress demand an investigation into that.

A judge just ruled this week that Donald Trump has to face a defamation suit against one of the women who’s suing him for sexual misconduct. I would think that would warrant some kind of republican investigation just based on the simple fact that that’s what they did throughout the entire years of the Bill Clinton presidency. If nothing else, the Trump administration, the Trump presidency, has proven what hypocrites the republicans in this country are and I’m not just talking about the elected officials, I’m talking about the voters. They were calling for investigations during the Clinton years. They wanted answers. They wanted this criminal in the White House to be taken down and now they’re doing everything they can to defend his disgusting behavior. They’re trying to say that, “Oh, having an affair with a porn star and paying her off to keep her quiet, yeah that’s fine with us. We don’t care.” “Ah, Jared Kushner lying to federal regulators and then basically making people homeless, ah, we’re totally cool with that but we still are ending all of our tweets with the hashtag lock her up because we’ve got some kind of grudge against Hillary Clinton.”

I’m no fan of the Clintons, most people obviously know that, but it is ridiculous to see these same republicans today excusing and being complicit in the behavior of Donald Trump when they wanted to have Bill Clinton strung up in the 90s for allegedly doing the exact same things.