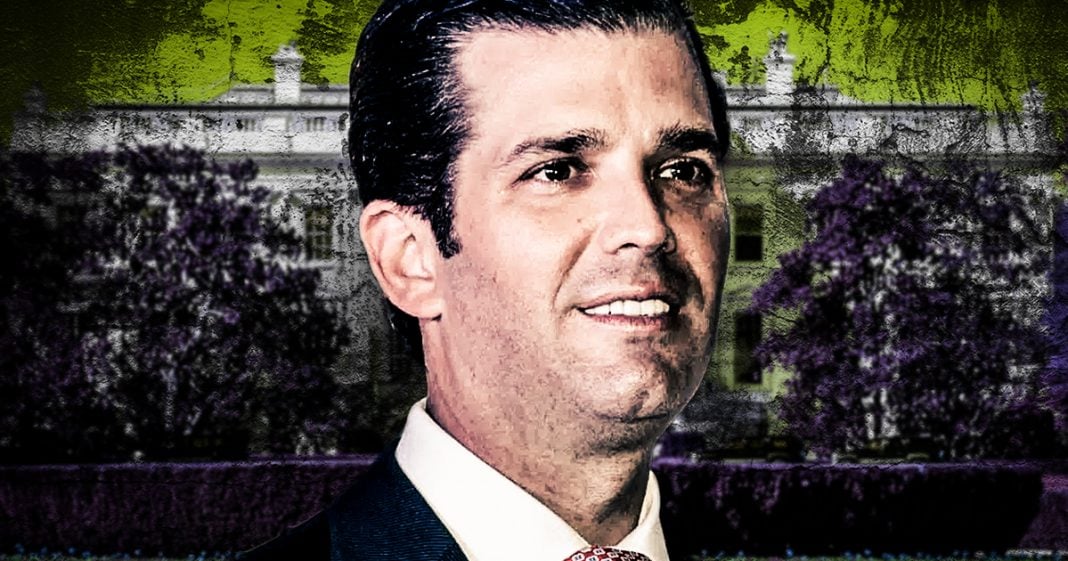 It has now been reported that another cause of the divorce between Vanessa Trump and Donald Trump, Jr. is that Junior was not shy about having affairs, including one with Aubrey O’Day. But according to a new report, it was Donald Senior who attempted to get Junior to quit his cheating ways by telling him to stop having an affair while his wife was pregnant. Ring of Fire’s Farron Cousins discusses this, and explains why the President’s own behavior kind of disproves this report on its face.

According to a new report by Business Insider, Donald Trump Sr. tried to tell Donald Trump Jr. to “Cut it out.” when Donald Trump Jr. was having an affair on his wife, Vanessa Trump, when she was pregnant with their third child. According to reports, Trump Jr. was having an affair with singer, Aubrey O’Day, who was a contestant on the Celebrity Apprentice. That’s where she met Don Jr. The two began an affair and at the time, when his wife was pregnant with their third child during the affair, he told her, “Don’t worry. My marriage is already dissolving anyway, so let’s just continue our little fling.” Business Insider says that it’s been reported that Donald Trump Sr. told his son, “To cut it out. To work on and save your marriage.”

I don’t buy that for a second. Given what we’ve seen from Donald Trump, both before he got into politics, during the campaign, and since then, he’s not exactly the kind of guy who would tell another guy to stop having an affair. Hell, in the last few days here we’ve had even more women come out and accuse Donald Trump Sr., the President, of having an affair with them while he was married to Melania and they’re trying to get their non-disclosure agreements voided, so that they can tell their stories. So yeah, I don’t believe for a second that Donald Trump told Junior to stop having an affair.

Here’s the kicker on all this. Trump Jr. allegedly said, “His marriage was dissolving.” while his wife was pregnant with kid number three. Well, they ended up having five kids together. So, they still had two more kids after he said the marriage was dissolving to singer Aubrey O’Day. This is a family that has no respect for women whatsoever. They will lie to them to get whatever they want. They will treat them like second class citizens, as friends of Vanessa Trump have told the press Junior did to Vanessa. They don’t care about women. Women are sexual items to be won over and when you’re done with them, you get rid of them. That’s how Donald Trump has lived his entire life. That’s how Trump Jr. is living his entire life. That’s the kind of human beings they are. It’s disgusting, it’s inappropriate, but that’s what the American people, or at least the electoral college, decided to put into the White House for us.