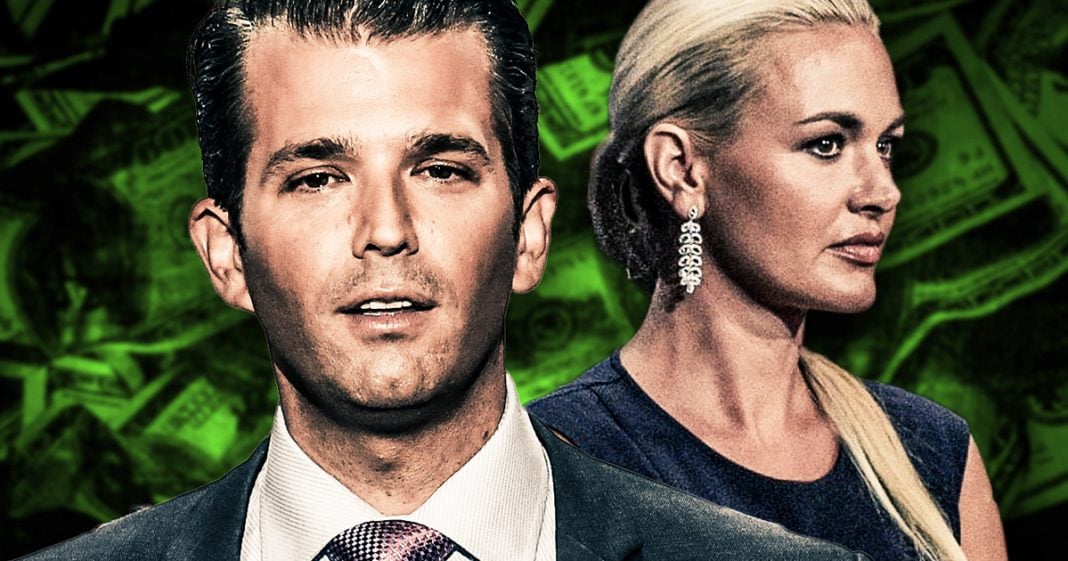 According to new reports, Vanessa Trump, the soon-to-be ex-wife of Donald Trump, Jr., was put on such a tight budget by her husband that she was forced to borrow money from her mother. Sources say that Vanessa did not live a lavish lifestyle and that frequently she was allowed so little money that she couldn’t pay for meals while eating out with friends. Ring of Fire’s Farron Cousins explains how this story is a perfect reflection of the Trump family’s views on women in America.

More developments have come out this week about Donald Trump’s divorce from his wife, Vanessa Trump. According to a report in Page Six, friends close to Vanessa say that she is divorcing Donald Jr. because he treats her like a second-class citizen. What they mean by that is that he has basically put Vanessa Trump, according to these friends, on an allowance. He puts her on a budget, and she has been so strapped for cash that she has actually had to reach out to her own mother to borrow money just so that she can get by. Meanwhile, her multi-millionaire or billionaire husband gets to spend whatever he wants on whatever he wants, because that’s just the kind of guy he is.

Now, a spokesperson for Vanessa Trump has come out and said that this story is false, “We do not stand by any of the accusations that have been made in this story,” so kind of have to take it with a grain of salt at this point. However, Page Six was the first to report on the pending divorce, and it turns out that that was 100% accurate, and these same people that they talked to for this story were the ones who they talked to for the first story, so I’m probably going to err on the side of Page Six at this point.

But this story isn’t necessarily just about the divorce. It’s about how the Trump men treat women, and what they want to do, what they want to see, throughout the entire United States. This is an important issue. If this is true, and Donald Trump Jr. kept his wife on a very short lease, basically made sure that she was 100% dependent upon him, and that she couldn’t go out and do anything on her own because she didn’t have enough money to do it, doesn’t that sound like the kind of disgusting human being that we don’t want anywhere near the Oval Office? At the same time, doesn’t that sound like something Donald Trump himself would do?

I don’t think Trump Jr. just invented this on his own. I firmly believe that this idea of underfunding your wife to the point where she has to borrow money from her parents came from his father, and it shows what the Trump men think of women here in the United States. They do believe that they are second-class citizens. They do believe that women are not in any way equal to men, and that they should be dependent upon their husbands. That is the Trump mentality towards women. That is the mentality of the guy serving in the White House as President of the United States.

He doesn’t believe in women. Hell, I have very little reason to believe that he even likes women, other than to serve as sexual objects for him. This story — again, if it’s accurate — just shows that Donald Trump Jr. shares his father’s exact same values by treating his own wife, the mother of his five children, like a second-class citizen.