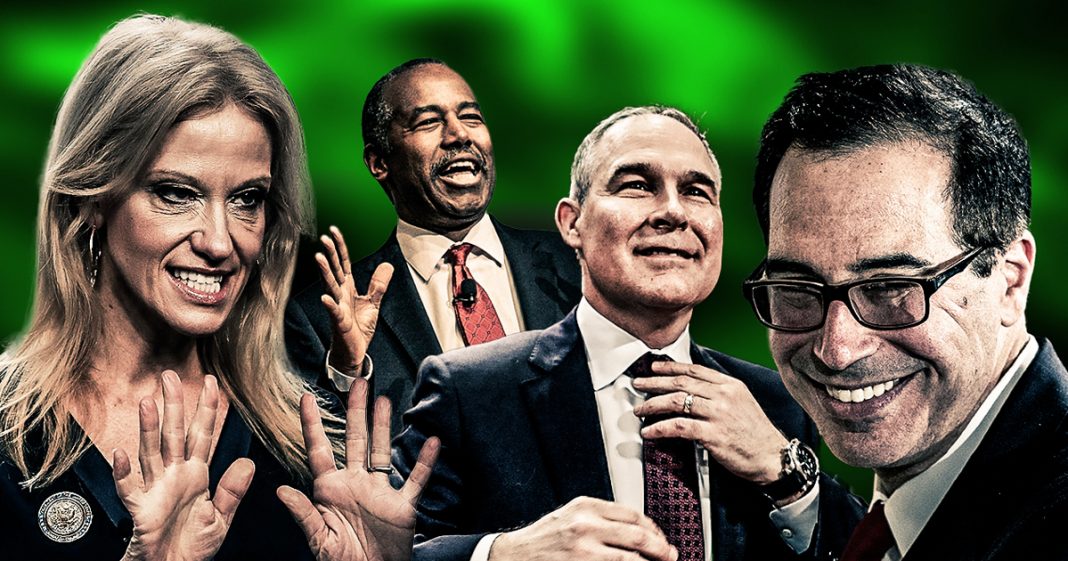 Members of Donald Trump’s cabinet – including Steve Mnuchin, Ryan Zinke, Kellyanne Conway, and Scott Pruitt – have been using our tax dollars to live it up, flying on private jets or first class, all while the Republicans in DC consider cutting back on our social safety net programs. This is inexcusable and unacceptable, yet many Republican voters seem to think this is perfectly ok. Ring of Fire’s Farron Cousins discusses this.

At the present time, there are at least six different investigations being carried out into members of the Trump administration for their misuse of funds specifically, in most instances, the funds they’re using to travel all around the world. Steve Mnuchin, the Secretary of the Treasury, is one of the worst offenders. On Thursday it was announced that Mnuchin had spent over $1 million flying on military jets since becoming the Secretary of the Treasury. $1 million to fly on military jets. That doesn’t include all of the guy’s use of charter jets, and private jets, and first class travel for him and his wife to watch the solar eclipse on the top of Fort Knox, and all of that nonsense that’s happening. You also have Ryan Zinke from the Interior Department, who’s under investigation for his travel expenses. Scott Pruitt with the EPA, not just his travel expenses, because as he said, he has to fly first class because the people in coach are so mean to him, because those are actually the people that he wants his agency to green light their poisoning from corporate toxins.

He also, Scott Pruitt spent, what was it, $43,000 on a soundproof phone booth for his office, so that nobody can hear what he has to say when he’s on the phone. Yeah, kind of sounds like the guy has something to hide. Kellyanne Conway under investigation for her travel expenses, and then of course, there’s Ben Carson at Housing and Urban Development, who is under investigation because he wanted to spend all that money renovating his office. I believe it was 160, $190,000, something like that, but he was only allowed to spend $5,000 to renovate his office. As it turns out, while he said he had nothing to do with that $31,000 dining set, he and his wife actually did pick it out and approve it, so he was busted lying on that. Nonetheless, here’s the thing. At least six different members of the Trump administration are trying to live the high life on our dime. Those are our tax dollars that they’re spending on military jets, and charter jets, and soundproof phone booths, and fricking plates and silverware.

That is money that could be better spent, I don’t know, housing the homeless, housing homeless veterans, giving healthcare to the elderly, properly funding teachers so that they can stop spending money out of their own pocket every month for supplies for their classroom to teach our children. Anything, anything would be better than spending money on these already-rich people to fly around in the lap of luxury. You’re a government employee now, and you know what that means? It means you get better healthcare, you get decent pay, but you’ve got to travel like the rest of us, and if you’re not willing to make those sacrifices, then I suggest you get your ass out of the federal government right now, because that’s what it’s about, and it always has been. If you can’t maybe fly coach, then you shouldn’t be working for the government. If you feel like you need to eat your food off $31,000 plates, you don’t belong in housing and urban development, and if you have to sit on the top of Fort Knox to watch a solar eclipse, then you shouldn’t be running this country’s, pretty much our money, but that’s what we have at the Trump administration.