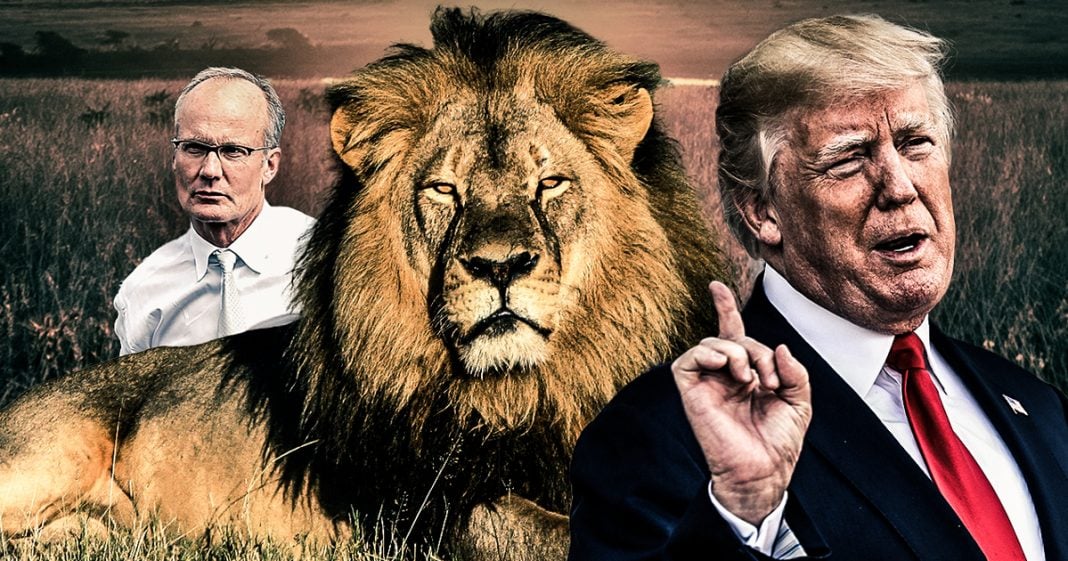 The Interior Department has created a panel in the Trump administration to determine the BENEFITS of big game hunting and trophy importation into the United States. One of the most famous members of this panel is Walter Palmer, the Minnesota dentist who killed Cecil the lion back in 2015. This panel exists for the sole purpose of allowing weak men to feel powerful by killing large animals, as Ring of Fire’s Farron Cousins explains.

The Interior Department has created a new little panel within their department that’s supposed to be about wildlife conservation, but in reality, according to the Interior Department itself, the people that have gathered on this panel that’s going to come at an expense to taxpayers of $250,000 a year, is to look into the merits and the economic benefits of allowing American citizens to go overseas to hunt big game and to bring back their disgusting trophies from killing these animals. What’s even more disgusting than that is the fact that one of the people that Donald Trump has put on this panel happens to be a Minnesota dentist who … Let’s see. His name is Walter Palmer, who most people I’m sure remember as the guy that killed Cecil the lion in Zimbabwe after the lion, the friendly lion I should add, walked up to him and he decided, great, I’m going to kill you because that’s the kind of person I am.

This lion had been there for years and years. Everybody knew him. He was famous. He was being studied by universities because he was so tame and calm around people, and Walter Palmer decided to kill him and now he’s getting rewarded by being a part of Donald Trump’s let’s go kill big animals commission, along with other people that are members of the gun lobby, members of gun companies, and even a couple reality TV stars are going to serve on this panel to tell us why it’s such a good idea to allow people to go kill big animals and bring back their tusks, or their tails, or whatever kind of disgusting piece of the animal these people want to bring back to the United States.

In reality, we should call this panel what it really is. This is the little dick club, and they’re out there telling us why we need to go kill big animals so that they can feel like men for a few seconds out of their miserable little lives, because that’s what this is about. That’s what this is about. If you, like the Trump sons, feel the need to go over to Africa and kill a tame but large animal, then yeah, you’re overcompensating for something. Perhaps you’re a little bit inadequate downstairs. I feel sorry for you on that, but that’s no reason to go out there and kill these animals to get a few minutes of testosterone pumping through your bodies that you otherwise wouldn’t have in there. This is beyond disgusting, and it’s disgusting that the government thinks we need a panel at the expense of taxpayers to tell us why this is such a good idea. I hope the members of the little dick club have fun, and I hope everybody in this country sees them for what they truly are.