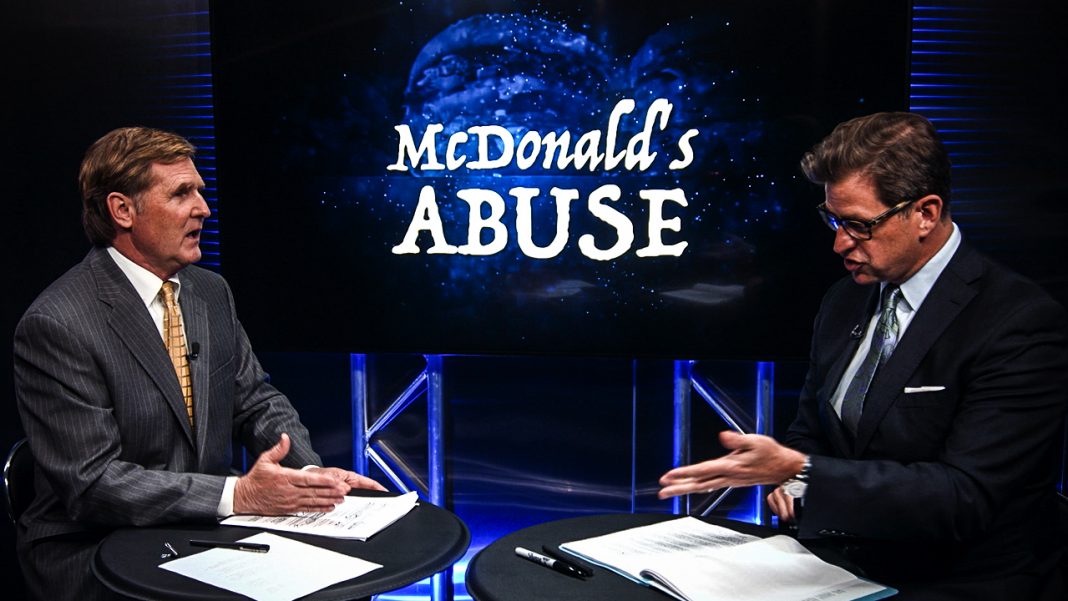 A settlement was announced this week between McDonalds and their franchise employees who have alleged that franchise owners have been engaged in labor abuses for years. Ring of Fire’s Mike Papantonio and Peter Mougey discuss this.

Mike Papantonio: A settlement was announced this week between McDonald’s and their franchise employees who’ve alleged that franchise owners have been engaged in labor abuses for years. Well, I look at this story and I agree. McDonald’s and all of these types that say, “Look, we operate under some different labor standard because we’re in the franchise business,” I think is ridiculous. If the franchise owner says, “You know what, McDonald’s? I think I want to put extra tomatoes on the McDonald’s hamburger.” What’s McDonald’s going to say? “No, you can’t do that.” Or how about this, “I want to put a cherry in the chocolate milkshake.” The franchise owner is going to get a letter the next day that says, “Cease and decease or we’re going to put you out of business. You’re not going to be a part of McDonald’s.” That’s kind of the way I see this case. What’s your take?

Peter Mougey: It’s even worse than that because the McDonald’s … You can say, “Well, they can’t mess with a hamburger, right?”

Peter Mougey: I mean, if you go into McDonald’s, you want the same hamburger.

Peter Mougey: McDonald’s tell them what soap to use in the bathrooms, what kind of bleach to use. I mean everything. McDonald’s controls everything. Then to say, “Oh, but not on the joint employee. That’s okay. That’s all the franchise.” That’s ridiculous. That’s the government creating a loophole for us.

Mike Papantonio: It started up with somebody … You had a group and the group, it was a unionized group-

Mike Papantonio: That wanted $15 an hour.

Mike Papantonio: That’s really asking for the moon. They want to be paid.

Peter Mougey: They should be adjusting that for inflation, because they started it in ’12, so now it should be 15 and a quarter.

Mike Papantonio: 15 an hour is almost at poverty level. These people are working. They want 15 an hour, which is reasonable. Okay.

Peter Mougey: Thank goodness for them. They’re out there fighting for the regular guy.

Mike Papantonio: Thank goodness for them. Exactly. So what ends up happening here, is by the way, there’s ways to get around the 15 an hour. There’s bonus systems you can use. There’s all kinds of ways to solve that problem. I’m not suggesting that’s the only way, but in this particular situation, you have this effort by a labor organization that says, “The employees of these franchises have a right to demonstrate and protest and say, ‘We think we’re entitled to $15 an hour.'” The labor board, tell me where the labor board gets involved here.

Peter Mougey: Well, the labor board … I mean, you and I hit this tread all the time about the revolving door, and it actually hits. The revolving door is when the National Labor Board employee goes to a private business and then back, and works their way up the food chain. And everyone’s scared to hit McDonald’s because they might not get back up to another job at the NLRB. And actually Emmanuel, who was part of the regulatory process in this case, actually ended up getting bounced because his staffing agency he represented, so he’s back and forth. So, the labor board came in and said, “You know what, we’re gonna fine McDonald’s. We’re gonna go ahead and hit you, McDonald’s, for some of the joint employee doctrine with the illegals working.” And it ends up that they settled the case before it goes in front of the NLRB, and the NLRB really doesn’t do anything at the end of the day.

Mike Papantonio: Well, but you have now, you have a labor board that is squarely controlled with a Republican majority.

Mike Papantonio: And as you point out, Trump appoints his pal to be on the labor board, and come to find out this pal of his as a clear conflict of interest because he was a former lawyer with a firm that represented some of the staffing agencies that had been fighting $15-

Peter Mougey: And they have an interest in what the outcome is.

Mike Papantonio: Yeah. Well in this situation, McDonald’s I think better get ready-

Peter Mougey: But it is sad that you let McDonald’s have all of this control over everything, excepting for responsibility for something like this.