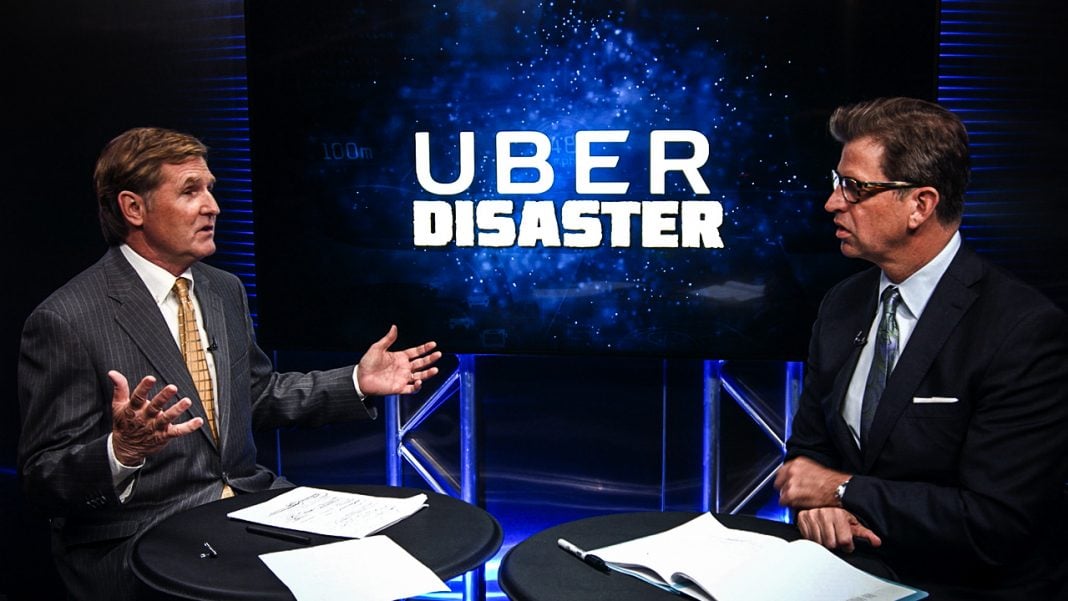 Uber has announced that they are suspending the testing of their self-driving vehicles after one of these cars killed a pedestrian this week. Now the company is facing both huge public backlash, and potentially devastating legal problems. Ring of Fire’s Mike Papantonio and Peter Mougey discuss this.

Mike Papantonio: Uber announced that they’re suspending the testing of the self-driving vehicles after one of those cars killed a pedestrian this week. Now the company’s facing both huge not only political backlash, public backlash, and potentially devastating legal problems. This case, to me, this is gonna open a complete door for reanalysis of something that we’ve taken for granted, what happens in an auto accident? Who’s responsible. Here’s what I’m saying. Somebody runs into the back of you, it may cause injury. You go after the driver because their clutch. They weren’t paying attention. They hurt somebody in the vehicle. You have a personal injury suit. Here, you have a vehicle that’s owned by Uber. I got that. You know you’ve got to pursue against Uber, but what if this vehicle’s owned by an individual? The individual’s not driving it, not in control of it. But the car nevertheless, we’re looking at this five years from now, runs into somebody. Kills somebody. Is it a product defect case?

Mike Papantonio: It could be both.

Peter Mougey: It might be dangerous instrumentality where the owner’s responsible, and you’ve got a product case. It might end up being both. I’ll tell you what. I think we need to let the facts develop on this case a little bit, because the lady that got hit walked outside of the crosswalk.

Mike Papantonio: She walked outside of the crosswalk.

Peter Mougey: That’s what I’m thinking. Now before we throw them under the bus-

Mike Papantonio: I’m not throwing them under the bus. I’m just saying, is I look at the case and I figure out how weird this is gonna be in the future.

Peter Mougey: And actually with somebody behind the wheel. I’m not exactly sure what they were doing.

Peter Mougey: Were they eating pizza?

Mike Papantonio: That’s part of it. Here’s where I’m headed with this. As time goes on, five years from now there’s gonna have to be an analysis. Car runs into another car. The autonomous vehicle, who’s responsible? Is the guy eating the pizza? He’s in the passenger seat. Where is he? What is the responsibility? Now here’s where it … Let me make a prediction, okay. Here’s the prediction. All of these cats that are out there, 1-800-automobile-accident, give me a call. Fender bender, give me a call. These billboard lawyers, these lawyers are gonna be out of business because what’s gonna happen is you’re gonna have immunity. The government is going … In order for this, the autonomous vehicle thing to really take off, they’re gonna have to have some kind of immunity protection. That’s my prediction.

What do you think? Is that an overstatement? We always see where technology-

Mike Papantonio: From a legal, I see the automobile working. I really do see the technology working.

Peter Mougey: No, I can’t see that we’re gonna give these companies immunity in the legal system. If you have the money and the capability to run it, you’re responsible for the vehicle, just like I am not if one of my kids gets in a car wreck.

Mike Papantonio: Look, the Senate … This is a Congress that gave guns total immunity. You can’t sue gun manufacturers for almost anything. I promise you. If this moves forward and they want to up the technology here, we’re gonna see the auto industry giving … They’re gonna be given immunity. And these people that are in the business of fender benders, I think they’re gonna be out of business. At any rate, this case is one that Uber better pay attention to because the ramifications are broad, not just politically, but socially and legally in this case.