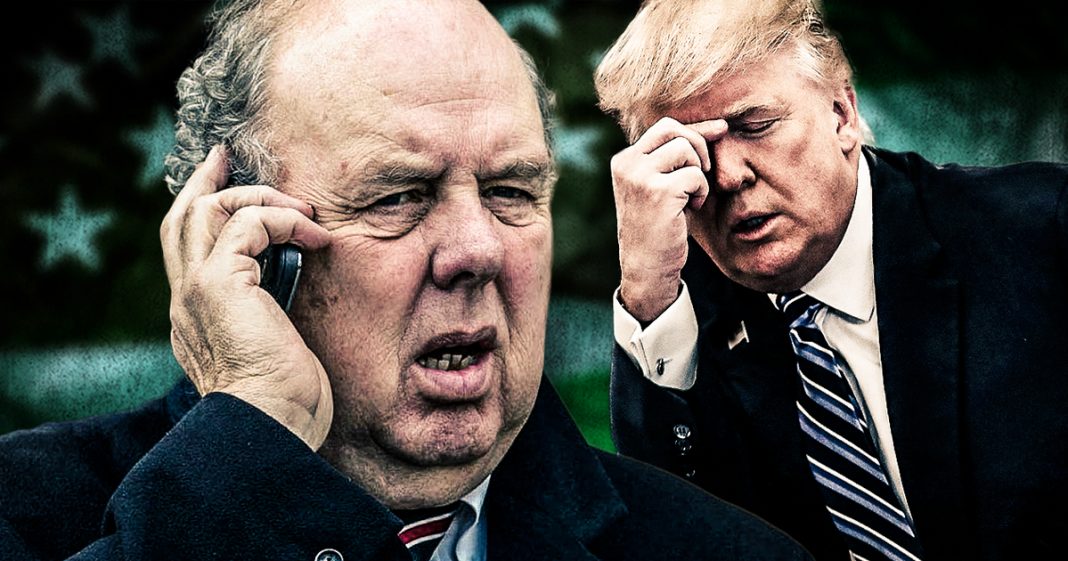 John Dowd, Donald Trump’s embarrassing lead lawyer for the Mueller probe, announced that he was quitting the President’s legal team this week, citing the fact that the President refuses to take his legal advice. Not to side with Trump, but given what we’ve seen from Dowd in recent weeks, I doubt many people would take his advice on anything. Ring of Fire’s Farron Cousins discusses this.

On Thursday of this week, John Dowd, Donald Trump’s lead lawyer in the Mueller probe, announced that he was immediately resigning from Donald Trump’s legal team. Now in interviews after he announced his resignation, he expressed his love for Donald Trump, nothing has changed between them, there’s no bad blood, he really cares about the guy, absolutely loves him, but he just couldn’t be a part of the legal team anymore because Donald Trump wasn’t listening to a thing he had to say.

Now I hate to say these words, but in Donald Trump’s defense, and it pains me to have to utter that phrase, if John Dowd was my lawyer, given his behavior and statements over the last few weeks, I probably wouldn’t listen to him anyway. This is a guy who less than one week ago, basically admitted to obstruction of justice with Donald Trump’s firing of Andrew McCabe, and then he had to walk it back, and then he had to walk back the walking back, so yeah, this guy’s pretty much an idiot.

He also exceeded the federal limits on how much money you can donate to a campaign, which should technically be a felony, but John Dowd got off the hook on that. He’s proven time and time again that he is incredibly incompetent, so I really can’t blame Donald Trump for not listening to a word that this moron had to say with regards to his legal defense.

Now according to members of the White House, the reason John Dowd left was because he was not aggressive or tough enough for a guy like Donald Trump. Maybe he didn’t want to beat up Joe Biden as much as Donald Trump wants to beat up Joe Biden. I don’t know what not tough enough means, but the White House has signaled that they want to take a more aggressive approach to this Mueller probe, which, to be honest, probably going to end badly for Donald Trump. Because as stupid as John Dowd was, he at least knew better than to allow Donald Trump to go and testify before Mueller, now that he’s gone, there’s nobody left to say, “No.” I don’t think anybody else on Donald Trump’s legal team is going to stand up to hi and say, “Hold up. If you go and testify, you’re probably going to end up in prison, or at the very least, impeached for either obstruction of justice, for perjury, or a combination of all of those things.”

Dowd leaving, again, even as dumb as he is, is a very bad sign for the Trump defense team. Donald Trump is going to end up talking to Robert Mueller. Donald Trump is going to say something stupid during his interview with Robert Mueller, and that is going to be the beginning of the end for the Trump administration. He added a lawyer this week, who believes in the whole deep state conspiracy theory, and I have to imagine that that’s probably not going to go over too well with the grand jury, when your attorney steps up there and starts spreading conspiracy theories and lies that pretty much anybody with half a brain can see as lies.

Trump’s in trouble. John Dowd leaving just shows how horrible this whole legal defense that Trump has built, is basically falling apart at this point. I hope he goes and talks to Mueller because we all know that it’s not going to end well for him, but at least acknowledge that John Dowd did one thing right, and that was preventing Trump from talking to Mueller. Now that that buffer’s gone, things are going to get pretty bad, pretty quick for the president.