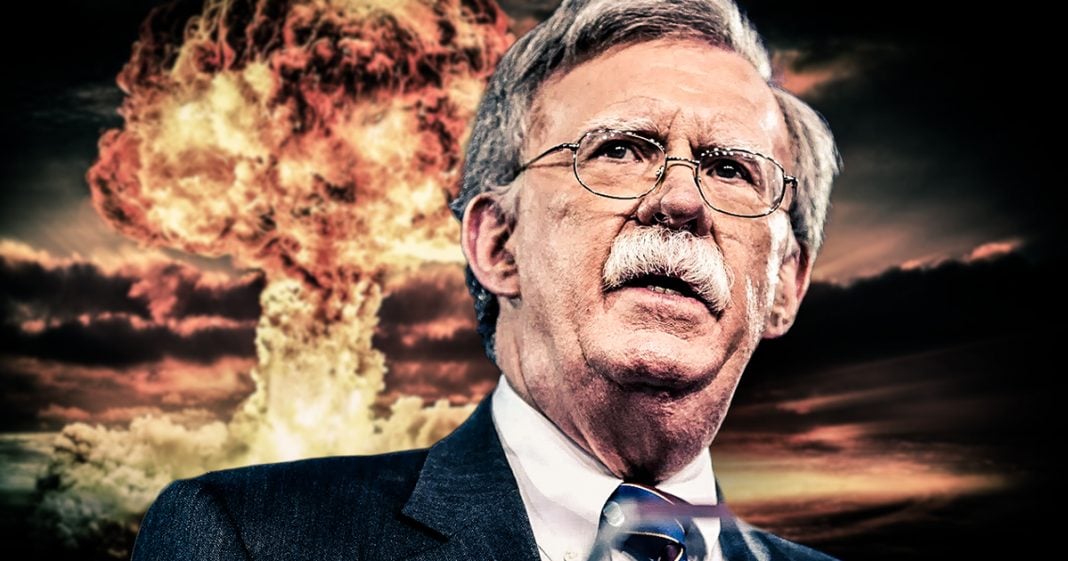 Donald Trump announced via Twitter this week that his current national security advisor, HR McMaster, would be leaving in early April and will be replaced with Bush-era Neocon John Bolton. Bolton has repeatedly called for non-provoked attacks on both Iran and North Korea, and has stated that he would love to work with a president who has no foreign policy experience because they’d be easier to “move” on certain issues. Ring of Fire’s Farron Cousins explains why this move is a disaster waiting to happen.

Now for those of you who aren’t familiar with John Bolton, here’s a brief primer on how horrible this man is. Both as a member of a cabinet and just in general, as a human being. John Bolton was one of the architects of the Iraq War, and recently was still defending the decision to invade Iraq based on faulty intelligence. He still believes that that war is justified and that we should still be over there fighting. Furthermore, he is on the record as saying, “That he wants to launch a preemptive nuclear strike against Iran, and he’s also absolutely in favor of launching an attack on North Korea, even if the United States is not provoked.”

Now all of those statements are scary enough. We know that John Bolton is a war monger, he’s a guy that has never met a country that he doesn’t want to bomb the hell out of. But that is less terrifying than this statement. John Bolton is also on record as saying, “That he would love to work for an administration with a president who has no foreign policy experience because they are easier to move on certain issues.” So not only does John Bolton want to bomb everyone in the world, he also wants to work for a president that would be moved towards bombing every country on the planet. And that is exactly what he’s getting with Donald Trump.

Now some reports have said that John Bolton had to promise not to start any wars when he joined the Trump administration. I don’t if there’s any truth to them actually making him say that, but we do know that the Trump foreign policy is about to get a hell of a lot more hawkish. John Bolton is not a guy who’s going to sit there and want to have talks with North Korea. He has specifically said that he does not believe in having talks with North Korea. Because for John Bolton, the only thing he knows is war, and violence, and death, and that is what he is going to bring into the Trump administration.

And I have to point this out one more time. This is a guy, who if Barrack Obama and Eric Holder had done their jobs when they came into the White House in 2009, wouldn’t even be eligible to serve as National Security Advisor right now because he would be in prison for war crimes. But instead, because that administration choose to look forward, not backwards, John Bolton is out there living the free life, about to have the ear of the President of the United States on a daily basis.

Everything that Donald Trump learns starting April 9th, when this transition takes place, everything the president learns about foreign policy is going to come through John Bolton. Bolton is going to have access to that information, he can cherry pick what he wants, and make it seem as if war is the only option with countries like Iran or North Korea. This is not going to end well for the United States. The Iraq War did not end well for the United States, and yet, John Bolton, incoming National Security Advisor, still thinks that was a good idea.