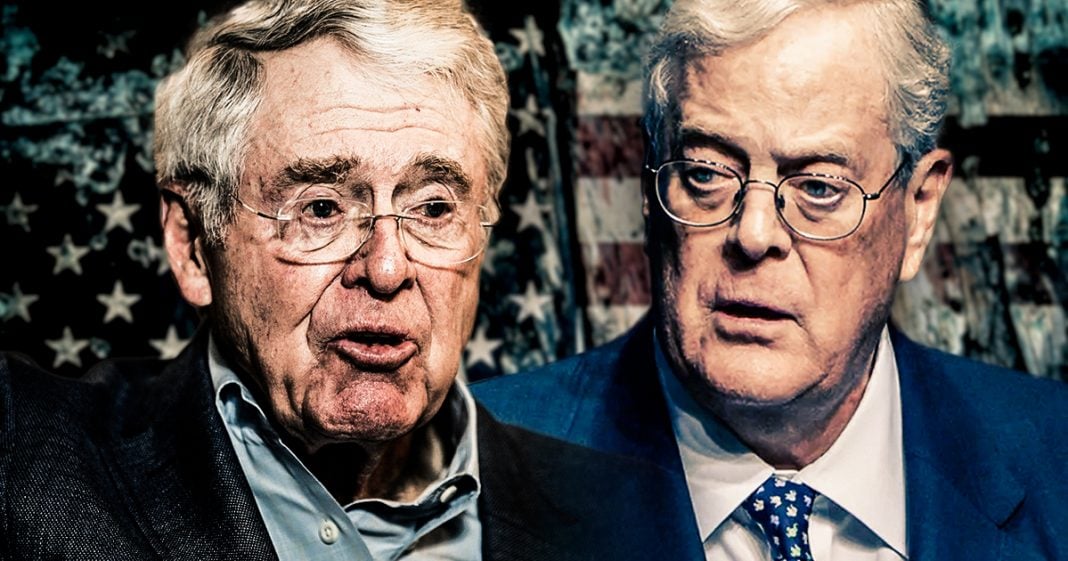 The Koch Brothers are using their “educational arm” to help rewrite information about slavery in the United States for American school children. Their Bill of Rights Institute has created new educational materials that attempt to not only put a happy face on slavery, but also to paint pro-slavery Founding Fathers as anti-slavery crusaders. Ring of Fire’s Farron Cousins discusses this.

Most people may not realize this, but the billionaire Koch brothers are actually also in the education business. Not that they necessarily make a profit from it, but the Koch brothers, for years now, have been trying to infiltrate education in the United States at every single level. From preschools to colleges, the Koch brothers have found a way to weasel their way into the American education system.

And recently it was revealed that one of the organizations that they’re funding in order to do this is called the Bill of Rights Institute. What the Bill of Rights Institute has been putting out for free for teachers, so that you don’t have to come up with a lesson plan, you can just go to this Koch brothers funded propaganda, one of the recent lessons that’s been uncovered is a lesson teaching kids that, hey, slavery wasn’t all that bad, here in the United States, and you know what? Those Founding Fathers, the very same ones who owned hundreds of slaves, were actually anti-slavery crusaders who helped save the day for American slaves. Isn’t that great?

This Bill of Rights Institute has put out these free lessons for teachers, these videos and instructional materials to share with their class, saying that a guy like Thomas Jefferson was actually very much anti-slavery. They leave out the part, completely, that he owned more than 200 slaves during his lifetime. They try to paint all of the Founding Fathers with this broad stroke of being anti-slavery. They actually defend the Three-Fifths Compromise, and these lesson plans go on to say that reconstruction was just punishment for the South and Republicans were the ones who were trying to make everything better for everybody in the country.

What the Koch brothers are trying to do is dumb down the United States. Why? Because Republicans, their policies, and their campaigns depend on voters being stupid. And what better way to make sure that the next generation is just as dumb as the current one, than to whitewash their entire educational experience, teach them things that everyone knows are not true, and have them grow up believing the Koch brothers’ curriculum to be the gospel of the Unites States?

That’s what’s happening here. The Koch brothers understand that their legacy is going to be one painted with an ugly, ugly brush, so the only way they can fix that is to make us as dumb as they already think we are. They want our kids to be stupid. They don’t want our kids to know the truth. And, yeah, slavery was an ugly time in American history and that’s all the more reason to teach kids what actually happened so that, in the future, we don’t repeat the same mistakes. Because when you look at what’s happening in this country and the people that we have running it, doesn’t seem too unlikely that they might try to bring something like that back.

So let’s teach our kids our horrible it was, how wrong it was, and how grossly we treated those slaves, both before they came to America, during the trip, and once they arrived here. They need to know what happened, so that they can ensure that it never happens again, but that’s not what the Koch brothers want your kids to learn.