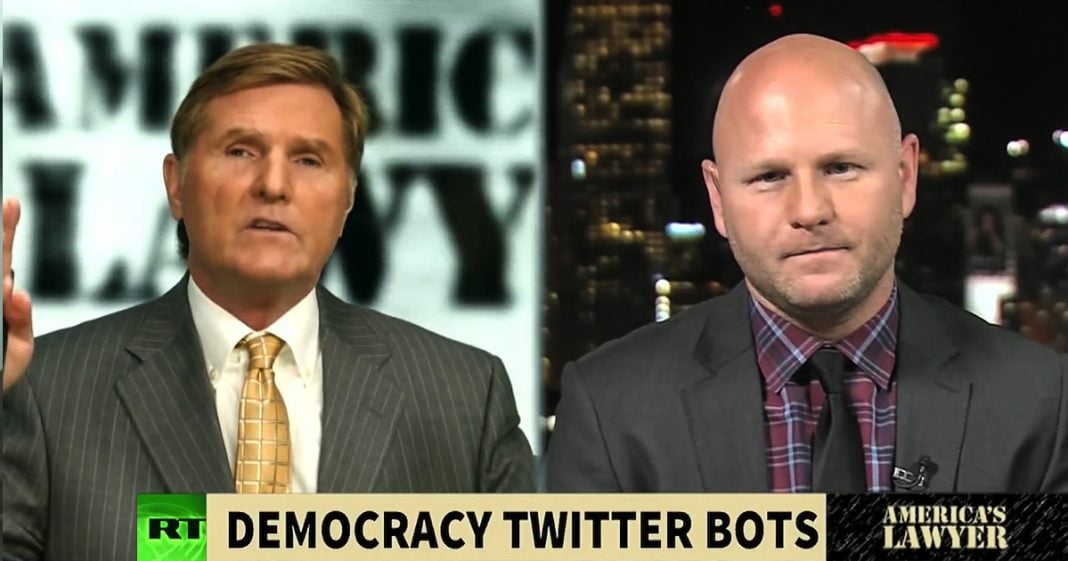 Via America’s Lawyer: Mike Papantonio and Farron Cousins talk about how twitter bots were used by establishment democrats to attack opponents which may turn out to be illegal.

In 2011, a lawsuit was filed by the company PhoneDog against one of their employees for refusing to give up their work sponsored Twitter account after their employment with PhoneDog ended. The company argued the Twitter accounts contained trade secrets and other important information and influence that were the direct result of the company’s efforts, not the individual. The court agreed with the company but the parties agreed to settle before a verdict could be handed down at all. So the eyes of the law, a social media account appears at this point to be a valuable asset, whether held by an individual or a company.

The reason this information is relevant is because a recent expose by Huffington Post revealed that a crew of establishment Democrats were using Twitter bots to amplify their messages online and inundate their critics to the point that their social media accounts were nearly useless because of the barrage of hate that was being sent out there. And by doing this these accounts may have been acting illegally in these. These accounts using these Twitter bots had something in common. They were all pro Hillary, anti-Bernie Sanders people and organizations that to this very day are still trying to silence progressives who dare to question the so-called wisdom of the establishment. Now, money is involved.

Joining me to talk about this is Farron Cousins, executive director of The Trial Lawyer Magazine. Farron, start out by telling us exactly how social media accounts can be counted as an asset of value for business or for individuals. We missed that this, this is a monetary issue, isn’t it?

Farron Cousins: It really is. Bankruptcy courts have actually kind of been on the forefront of this issuing rulings recently for both corporations and individuals saying that a social media account is basically a non-monetary, nonfinancial asset of the individual or the company. It expands their reach. You pointed out it’s a lot like a mailing list and we all know mailing lists, email or direct mail are incredibly valuable for corporations because it is a marketing tool. And in this age of more and more independent contractors and freelancer journalists, Twitter accounts are absolutely the best tool that they have even for companies for marketing to get their message out to tens of thousands or even millions of people in some instances.

Mike Papantonio: Farron, let me put it like this, If you have an account and you’re using it commercially, you know that every month it brings in X. number of dollars in advertising or whatever system you have to generate money from that account. Now you have these bots, this story about the pro-Hillary bots coming in and just demolishing the Sanders, the Bernie Sanders accounts. Those were accounts that were actually making money from advertisement. It wasn’t that they were just about Bernie Sanders, they had a lot of different issues, a lot of things that brought in advertisers. Tell us about the PhoneDog v. Kravitz court case, and how that impacts the legal status, the value of social media.

Farron Cousins: The PhoneDog case and it’s very disappointing they didn’t allow this to go to verdict because it could have changed the landscape, because the court was already willing to say that yes, social media accounts are absolutely a valuable outlet for companies and individuals. Now with the PhoneDog case what happened was the employee started his own Twitter account that the company gave him. It was, I forget, but it was the guy’s name underscore PhoneDog. So it was connected directly to the business.

Mike Papantonio: Well, that’s where the lawsuits are going to develop. You’re going to have these bots coming in, I keep coming back to the pro-Hillary bots because I guess they believe they’re above the law. I can promise you a lawyer going after them and showing that on day one this account was bringing in $15,000 a month. And when the Hillary bots came in it made it so difficult for people to go to that account that it dropped to 2000 a month that case is a real case and whoever was behind the Hillary bot kind of program, whether this it was the DNC, whether it was John Podesta himself, they now are exposed. It’s just a matter of somebody reaching out and saying I’m going to bring the lawsuit. This is a lawsuit, a big lawsuit on the personal value of these accounts that’s waiting to happen. Explain what this new report by Huffington Post discovered.

Farron Cousins: Well basically, they found that one individual specifically, a woman named Sally Albright who was a communications strategist it said for the Democratic Party, she’s basically in the communications industry, which could mean any one of a million different things, it’s kind of a broad brush people used to paint themselves with these days. But also groups like Shareblue which was founded by David Brock from Media Matters. They were using these Twitter bots to silence debate online.

Here’s how they do it. Any time one of these people, whether it’s Sally Albright or Shareblue they post something, then you have these progressives, real progressives come on there and argue and say well, this is inaccurate. You’re lying here, you’re being fraudulent and then these people would notice that suddenly whenever the group or individual responded to them, that response would immediately jump up there with an astronomical amount of likes and retweets would inundate somebody’s Twitter notification feed. By doing that they’re basically rendering somebody’s Twitter account unusable.

Mike Papantonio: Right. Not only that. What it does is it creates chaos, it creates pandemonium on a site. That’s what the Hillary, John Podesta, Hillary bots were trying to do to Bernie. Now, the statute of limitation has not run on this, let me make that very clear. If you’re an attorney watching this, you might want to take a look at what I’m talking about here. Once you put a value on this social media element, then when somebody like the pro-Hillary, DNC, John, whoever it is takes that away, then you have money damages. What is your take on how this scam takes away the value of Twitter users account? Go into more detail about how you would say, this actually destroys the value of that account that some people have worked years to establish by way of advertising, clearly.

Farron Cousins: Well for me, I think there’s two different legal angles here. There is the value of the account itself that these people who are being attacked by the bots, they’re losing that value. When you go on there and you use Twitter as a means to promote your business or if you’re a journalist, your articles, basically your livelihood and you’re inundated with responses to a Twitter argument you got that are generated by bots, that decreases the value of your Twitter account because it basically renders it unusable. You have to distinguish and go through and waste your time figuring out who is a potential client, who’s a potential buyer and who is just a bot arguing that you like Bernie Sanders.

But the second thing, and I think this is a big, big legal problem for people like Sally Albright, is the fact that they market themselves as communications people. They get clients based on their reach and if you go to them and say well look at my Twitter account, you see how many responses and how many likes I get, well it turns out it’s bots doing a lot of it. That is fraud. That is misrepresentation, excuse me, of services by overstating your actual reach. The Huffington Post expose actually found out as well that Sally Albright herself is running a lot of these other automated accounts too, retweeting and liking her own things, which artificially increases her numbers so she can then go to potential clients and say look how great I am and it’s all a ruse.

And so, it’s beyond me at this point why there are already hasn’t a deluge of suits for both things. One is as you’re talking about Sally Albright where she’s making stuff up. She’s absolutely making things up. It’s a fraud. That’s an easy case. The other one of course is where you have the DNC or whoever it was that was the bot attack on the Bernie Sanders account where what you’re doing is taking away the advertising dollars, you’re creating chaos, people don’t want to go to the site anymore, that’s another case entirely.

So I got to tell you, it’s just a matter of time in my mind before there’s some very serious lawsuits that develop and I’d like to really see some of them develop before the next election so people can understand how dangerous it is to go out and hire an entire roomful of bots for the sole purpose of trying to burn down somebody else’s site. Don’t you think it’s a timely issue that probably ought to be paying attention before this next midterm election? What’s your take?

Farron Cousins: I think it absolutely is and you know, this is something that people in politics left and right are using across the board. So far, there’s no evidence to suggest that the DNC was in any way involved in any of this but the individuals who are using this and using it as a communications tool, branding themselves as experts with a far reach, they’re the ones who need to be worried about what the courts could do in this situation and that should send a message to anyone in the political field about what’s happening.